The 2016 Philadelphia Fringe Festival celebrated its official launch at the Barnes Foundation on Friday evening with an extraordinary one-night-only sold-out event in the Curated Fringe, as New York musician/composer Jace Clayton (also known for his avant-garde work under the name of DJ/rupture) debuted Room 21 in the museum’s expansive Annenberg Court. The commissioned piece, curated by Lee Tusman in collaboration with Ars Nova Workshop, was conceived as a site-specific musical response to the multi-cultural cross-temporal art and artifacts in the institution’s eponymous gallery and the extensive vinyl record collection of its founder Dr. Albert Barnes.

Following two years of archival research but only three days of rehearsal, a total of 20 musicians from diverse cultural traditions came together to perform Clayton’s rich creation, echoing Barnes’ own diversified aesthetic and restating in sound the visual styles represented in his collection. Although Clayton is credited in the program as the composer, he did not “compose” the piece in the traditional sense (e.g., he did not write any original music for it), but served more as a coordinator, curating, crafting, and orchestrating the ten complex segments, and collaborating with the musicians in presenting new arrangements of existing works, which they selected from, or were analogous to, those amassed by Barnes.

As the musicians performed in handmade costumes by fashion designer Rocio Rodriguez Salceda of Prellezo, Eric Rath (silhouetted in a second-floor office overlooking the court) recited the catalogued inventory of the museum’s Room 21, including an assortment of Pennsylvania German decorative arts, African masks and figurines, religious paintings, and a reclining nude by modern artist Amedeo Modigliani.

Though the audience could not see the art during the performance, the eclecticism of the works installed in the small gallery was evoked by the range of styles represented in the music, from Maurice Ravel’s “String Quartet,1st movement” played by the Prometheus Chamber Orchestra, to Lead Belly’s “Bourgeois Blues” performed by Arnold de Boer accompanying himself on electric guitar, to the celebratory Ethiopian song “Eyoha Abebaye” sung by masinqo player Gezachew Habtemariam. (Rounding out the ensemble of talented musicians were Emily Manzo on Rhodes keyboard and Ben Lee on banjo and guitar).

Perhaps the most beautiful and inspiring aspect of Clayton’s exquisite multi-layered piece, as with the Barnes collection, is its spirit of adjacency. Though different traditions and eras are brought together in Room 21 (as heard in the beautiful ensemble work on “Couldn’t Hear Nobody Pray,” “Zelesegna,” and “Medallion”), the individual ingredients are not subsumed by the whole into one indistinguishable melting pot; each part retains its autonomy. There is integration without obliteration; harmony without homogeny. Jace Clayton has achieved in music what we should all strive for in the world. 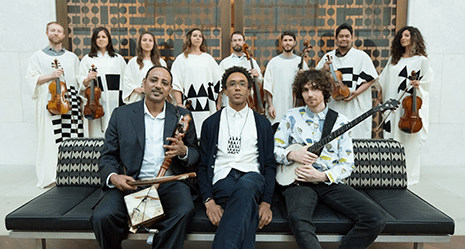