In Kingsessing, in the bare-bones exposed-brick performance spare Panorama, Der Vorführeffekt Theatre’s “The 7 Person Chair Pyramid High Wire Act” is a welcome oasis of imagination. Directed by Sarah Lowry and supported by Patrick Costello’s beautiful and texturally complex design work, Donna Oblongata’s new work is rife with creativity and play. The set is a halfway between children’s art project and the cart of an itinerant magician; it is a puppeteers stage finished with trap doors, paper trees, shadow screens, and old-fashioned light bulbs.

Oblongata and Costello play double role as the performers, appearing from within this magical contraption with high energy and clad in shimmering metallic spandex. Together the duo bring to life an eclectic series of characters and puppets: an oldies-loving yeti, a Serbian rope-maker, a love-struck bat, Charles Darwin, and the electromagnetic spectrum itself. 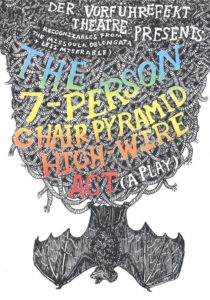 he stories of these characters intertwine and interrupt each other. Darwin embarks on a quest to find the yeti while the yeti competes to win a dance competition; Batticus the bat tries to woo the electromagnetic spectrum, and the electromagnetic spectrum tries to teach us about miracles. As they strive to complete their quests, and in between their clowning, they share meditative and poetic soliloquies with the audience, and attempt to convince us to their own truthfulness.

The result is often high-energy, funny, and surprisingly moving, and the show is at its best when it hits its counterpoint moments of silence and solemnity between bouts of quick-witted dialogue. Costello is genuine and touching as the cave-dwelling rope-maker who waxes poetic about hidden mechanisms and seeing in absolute darkness, and in his playing of Batticus, as the bat struggles to express the great love he feels for a personified scientific concept. Yet the show also has its struggles.

The poetry of the show sometimes comes off as overwrought, while some of the character work needs more physical and vocal specificity. Perhaps most frustrating was that the show stretches itself conceptually thin. I had difficulty keeping track of all the capital ‘c’ “Concepts” that are referenced and in play: Sight, Blindness, Knowing, Song, Caring, Mystery, Miracles, Love, Community, and Isolation, just to name a few.

It’s an ambitious roster, but with a little thematic focusing “The 7 Person Chair Pyramid High Wire Act” might just find its perfect balance.