We all have those childhood cartoons and characters we loved in our youth, whose innocence and wholesome comedy are branded in our memories and popular culture. But what happens if those wholesome childhood characters grow up to become….rebellious teenagers with teenage problems and drama?

In Dog Sees God: Confessions of a Teenage Blockhead, written by Bert V. Royal and beautifully directed by Terri Magers, in the “unauthorized parody” of the Charles Schulz Peanuts gang, the child characters from the immortal Peanuts comic strips and cartoons have grown up. Now, almost a decade after the comics occur, the characters have grown to teenagers and are facing much more serious problems than flying kites or seeing the Great Pumpkin.

C.B.’s beloved pet dog has died of rabies, and C.B. is desperately seeking answers from his friends about the after life and some deep life questions. Meanwhile, his friends are facing problems of their own, including drug use, eating disorders, sex, suicide, and violence as each character faces their own difficult coming of age journey.

Anthony Marchese provides the emotional core of the production as conflicted teenage protagonist C.B. His exceptional opening monologue set the dark tone for the production and Marchese had a fantastic emotional outburst toward the end of the show, in a stark contrast to his typically wholesome and down to earth portrayal for the majority of the production.

David-Benji Boccard is exceptional as Beethoven. As the most sensitive and obviously bullied character in the show, Boccard brings an impressive emotional depth to what could become a lackluster caricature in less experienced hands. His rant about being different, directed toward Marchese near the beginning of the show, was exceptionally powerful.

As the teenage “Mean Girl” versions of Peppermint Patty and Marcie, Hillary Thelin (Tricia) and Jaclyn Muir (Marcy) provide a hilarious literal portrayal to the stereotype “white girl wasted.” Thelin is hysterical as catty popular girl who can’t seem to stay sober or single for very long. Muir is adorable as her obnoxious know-it-all best friend and the comedic timing between the two girls is outstanding.

Ryan Kerr does an excellent job with the crass bully character, Matt, in the show. Ironically, the grown-up version of Pig Pen from the comics is both a germaphobe and obsessed with sex, leading to some hilariously vulgar exchanges and powerfully angry moments.

Jen Tonon provides terrific deadbeat and dry portrayal as Van’s Sister, a teenage delinquent appearing in a brief scene in the show.

Though Dog Sees God is an ensemble show featuring all of the teenage characters, Gabrielle Tokach and Maxim Sobchenko steal the show as C.B.’s sister and Van, respectively.

Gabrielle Tokach, as C.B.’s sister, is both precocious and spiteful, a fascinating combination she fearlessly pulls off. The chemistry and pacing in scenes between Marchese and Tokachwas excellent and Tokach had a very poignant moment with Boccard early in the show. Her excerpts from her over dramatic teenage one woman show are well worth the price of admission alone.

Maxim Sobchenko is hysterical as Van. His character voice and relaxed portrayal of a typical teenage stoner is often the highlight of the production and Sobchenko effortlessly delivers most of the comedic relief lines in the show. His scene with Tokach where the characters experiment with sex and smoking pot was hilarious and fabulously displayed the two comedic talents. Sobchenko’s rambling monologue about food during a particularly tense moment in the show was a standout moment and provided some much needed levity to the darkly dramatic production.

A clever approach to this production of Dog Sees God was Terri Mager’s simple set to suggest the familiar Peanuts locations. A ratty, beaten up doghouse resides stage right and a modern electronic keyboard resides stage left for Beethoven to play. A standard folding table serves as everything from the famous wall to a typical lunch table to a jailhouse visiting room barrier.

Similarly, the costumes, provided by the cast, suggest the famous look of each Peanuts character, with modern teenage adaptations, such as Goth updates and mini skirts. The script also provides helpful hints to identify which Peanuts character is which, without becoming too specific, and Magers and the cast have added some pleasant references of their own as well, particularly in the party scene.

For an emotional and darkly clever but comedic evening at the theater with some more mature childhood characters, don’t miss Dog Sees God at the East Street Arts Center. 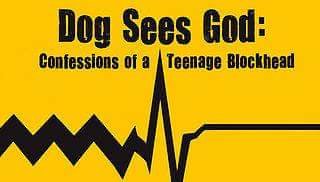