Spooky moors, haunting noises in the night, one or two mysterious deaths, and a fabled homicidal hound make for a cozy evening of suspense in the The Hound of the Baskervilles. Adapted by Brock D. Vickers, this Sherlockian classic marked a revival for Sir Arthur Conan Doyle’s famous British detective back when it was published in The Strand Magazine in 1901.

Hedgerow Theatre Company presents the Doyle tale in its second Storyboard Series production. The story is framed in the style of a radio play, using the few Company Members’ voices to bring the characters to life. “It’s a fun night of low-maintenance theatre,” Director and Producing Artistic Director Jared Reed explains. “We present a fun story, that is difficult to tell in a traditional sense, and we get to invite the audience in for an exciting, light evening of entertainment.” 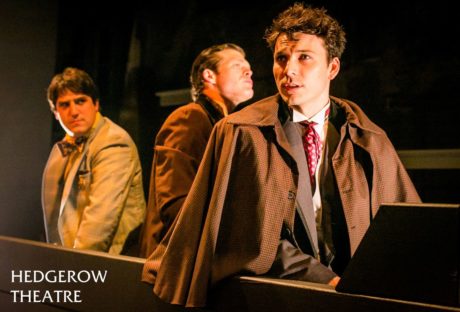 The stone walls and antique feeling of Hedgerow Theatre lend themselves perfectly to the eerie feeling of this chapter of Sherlock’s adventures, which reads more like a suspense novel than the usual complex deductions of the great detective. The stage is bare except for four music stands, a large projection screen, and the four actors taking on the roles as they play out (Mark Swift, Allison Bloechl, Josh Portera, and Robert Gene Pellechio).

Artist Hugo Delao illustrates some of the action with stationary storybook drawings of each character appearing behind the actors as they voice each one with intricate backdrop sketches serving for each of the many interior and exterior scenes. Rounding out the storytelling, Leslie Ann Boyden’s sound design brings out all of the eerie atmosphere needed with the low moans of the moors and the sad calls of the much-sought-after hound in the distance.

Swift and Portera share a lovely repartee as Sherlock Holmes and John Watson respectively, as well as being the two most engaging to watch no matter which character they might be. Swift transforms nicely into a few of the story’s featured personalities with an agility for dialects accompanied by a subtle but meaningful physical adjustment. Holmes is uncharacteristically absent for a large portion of this particular adventure, leaving Watson to puzzle together a few major plot devices, all of which Portera handles well, especially in his moments of horror and his occasional exasperation with Holmes.

A small ensemble playing a host of characters naturally has its moments of fun as they shift from one to the other within a scene, or even having an actress voice a male role here and there. What’s missing here is the playful theatricality usually built into pieces of that nature, acknowledging the telling of a story rather than a straight recitation of it. Without the accompanying drawings as a backdrop, it might have been difficult to tell some of the supporting characters apart as they lacked the definition and personality to fill the space of what’s missing from a traditional theatrical telling. While the music stand set up lends a welcomed simplicity to the presentation, lengthier passages could have benefitted from a small increase in the actors’ physical storytelling as well as some engaging narration.

Even on a muggy summer night, the storytime feeling of The Hound of the Baskervilles almost makes you wish you were seated near a warm fire with a comforting cup of tea as the mystery unfolds. It takes a sharp ear to pick up on every detail, but Doyle’s work remains as steadfast as the great detective himself.