Sword of the Unicorn is an intriguing show. Under the direction of Director, Writer, and Producer Harrison Stengle the play cleverly provides insight on the stress coming out in a new exciting way. I was captivated by the amazing cast and design.

The play opened with music from the band, led by Composer Brendan Stengle, which was lively and engaging throughout the production. The musicians wore black pants and shirts with splattered paint that blended in perfectly with the set design, which consisted of six flats – four upstage and two downstage – with splattered paint, which helped to create the Sci-Fi mood. 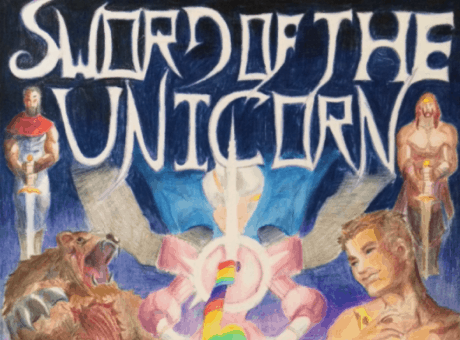 Sebastian is on a journey to find the Sword of the Unicorn and to slay an evil beast after being told it’s his destiny. Throughout his journey he meets many interesting characters and faces grave obstacles in an effort to retrieve the sword.

It was not hard to empathize with Ian Johnson’s Sebastian. You couldn’t help but root for him. Theo Wampler as Judy Garland and Marie Antoinette gave an explosive and hilarious performance. Tony Oriente and Topher Layton also displayed great humor in their scenes. Mike Ford, as the alien shark, chimed in with an emotionally compelling stage presence, conveying the fear of coming out, especially to a parent.

The entertaining and moving Sword of the Unicorn’s message of being true to yourself hit home.

Sword of the Unicorn plays through September 18, 2016 at The 2016 Philadelphia Fringe Festival performing at The Proscenium Theatre at the Drake – 1512 Spruce Street, in Philadelphia, PA. For tickets, purchase them online.