Conceived by emerging playwright Kevin Stackhouse as “a parody mock opera,” Gilbert and Sullivan’s Switched! Or The Insider and the Outsider, presented by Tavern Productions and PAFA Presents, is a camp mash-up of the titular duo’s operettas, Mark Twain’s novels Pudd’nhead Wilson and The Prince and the Pauper, and the popular film Trading Places by Timothy Harris and Herschel Weingrod. Set in Philadelphia in the 1980s (as was the movie), Stackhouse satirizes the US economy, the corruption of big business and commodities trading, the class structure, and race relations, with his original lyrics and dialogue, performed live to a pre-recorded musical score of favorites by Sir Arthur Sullivan. 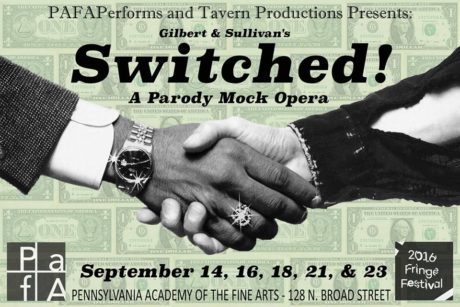 Before the staged narrative begins, members of the large fifteen-member ensemble set the “Let’s-put–on-a-show!” tone of unrehearsed casualness by walking around the theater, mingling and chatting with the seated audience, running up and down the steps, prepping for the performance, and doing their warm-up exercises. Any remaining semblance of order is soon turned upside-down when their story commences, as an African-American street character switches positions with a wealthy white investment broker, and secrets are revealed over the course of the two-act production.

While the concept is clever, the show’s unbalanced sound design rendered many of the lines and lyrics inaudible, overpowered by the music and lost in the space (the book is available in paperback, so you can read anything you couldn’t hear). The cast’s acting and vocal skills were inconsistent, with several flubbed lines and missed cues, weak low notes, off-tempo beats, and a sometimes flat delivery of jokes—problems that couldn’t always be chalked up to parody.

Among the highlights of the show were the rich harmonies of the full chorus in “The Accusation” and the clear soprano voice of Megan Eckley in “The Lovers’ Quarrel.” “The Butler’s Song,” sung by Christopher Latzke, Timothy Chastain, and Dan Kriss, most closely evoked the flavor of the British composer and his Victorian era. The funniest bits included over-the-top choreography performed by Daniel Palmieri, Clint Boylan, and Wade Harris in “A Thug’s Life Is a Rewarding Sort,” and the ethnic costumes and assorted foreign accents employed in the second-act scene of a 1980s masquerade ball.

Overall, the campy farcical approach and uneven cast of Gilbert and Sullivan’s Switched! Or The Insider and the Outsider might play better in a more intimate cabaret club than in a traditional theater with a proscenium stage. 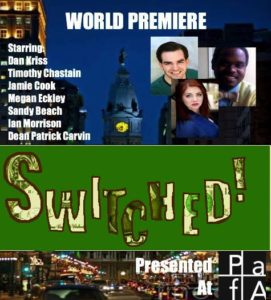 Gilbert and Sullivan’s Switched! Or The Insider and the Outsider plays through Friday, September 23, 2016, performing at the Pennsylvania Academy of the Fine Arts – 118 North Broad Street, in Philadelphia, PA. For tickets, call (215) 413-1318, or purchase them online.