Commedia dell’arte meets Shakespeare in Ombelico Mask Ensemble’s original deconstruction of Hamlet. Omeletto: Like Hamlet, Only Scrambled synthesizes all of Shakespeare’s dramatic characters with the comic archetypes from the 16th-century Italian genre, in a madcap ensemble-devised work making its world-premiere al fresco, per convention, in Liberty Lands Park.

Directed with flair by John Bellomo, an international cast–speaking a variety of languages and wearing traditional masks and costumes by Tina Giovannone and Curio Theatre Company–brings its wacky new perspective to the Bard’s tragic story, delivering all of the major plot points with exceptional wit and impressive physical agility. There are silly slapstick fight scenes, clever improvisations with the all-ages audience, and hilarious sight and sound gags—just wait till you see poor Yorick’s skull and hear how Laertes’ beautiful eulogy to his sister inspires a song by Simon and Garfunkel!

Here Hamlet’s famous play-within-a-play, staged by the Danish Prince to expose his father’s killer, is presented as a riotous puppet show in the style of Punch and Judy (which has its origins in Commedia’s stock character Pulcinella), by Italian master puppeteer Angelo Aiello. A side-splitting scene between the Innamorati Omeletto and Ofelia (the Italian equivalent of Ophelia), portrayed with ebullient charm by Spain’s Enric Ortuño and Israel’s Yarit Dor, captures the essence of the lovers’ mercurial relationship by repeating each other’s names over and over again, but with uproarious changes in their vocal intonations, facial expressions, and actions.

Running jokes about the darkness (though it’s still daylight), the location of the underworld, the deep voices of the dead (led by Brendan Gawel as the spooky moaning ghost of Hamlet’s father), invading Norwegians (“They’re terrible!”), and Ofelia’s “nice personality” all add to the non-stop fun. And the iconic closing scene, reworked by Ombelico with a zany swordfight and thirst-quenching poison, will have you laughing at the mound of bodies like you never thought you would. Rounding out the delightful ensemble are France’s Claire Loiseau as a lusty Gertrude and Andrew Clotworthy as Oratio (Horatio), who, along with musician Rachel Icenogle on cello and Bellomo on cymbal, accompanies the proceedings on guitar and vocals.

Omeletto: Like Hamlet, Only Scrambled is an irresistible concoction of “infinite jest” and one of the highlights of this year’s Philadelphia Fringe Festival. That comes as no surprise, since Ombelico’s consistently entertaining work is a highlight of every year’s festival. In true Fringe and Commedia fashion, admission to the show is free, so be prepared to put something in the donations bucket–or even to empty your wallet after enjoying this terrific treat! 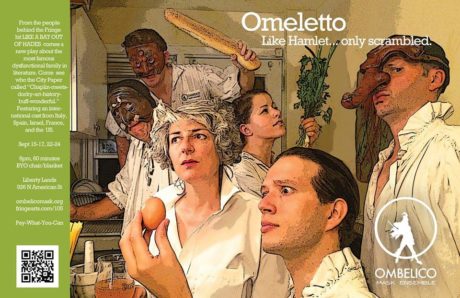