The lone actor set the portable stage onto the table and began to sing. The stage looked old with red cloth curtains and two knobs on top that she used to advance the paper on spools inside. The paper was covered with drawings that depicted the events that distressed her.In a lovely soprano voice, she alone sung us the tragic story.

Michaela Shuchman in Scarlet Letters, directed by Patrick Ross (who is also the playwright) successfully portrayed a tortured soul who has been shamed her entire life. She sang and she quoted from Nathaniel Hawthorne’s The Scarlet Letter. She “worked the room,” made me laugh, and oscillated between past and present. I sensed and saw the joy in her face when she talked about a past lover, and felt her anger at the injustices that women like Hester Prynne have suffered.

She was believable in a one-person show, which is always a challenge. Can he/she hold the audience’s attention for an entire play? Is it one long soliloquy or does the actor embody several characters throughout the performance?

Scarlet Letters, an ambitious one-woman play with songs by Kimaya Diggs, and is performed in a small room in Christ Church Neighborhood House, triumphs. Madeline Charne is the production dramaturge.

The setting was perfect for this interactive play. The small period room fit about 20-23 people in it. There was a large rectangular table in the center of the room, and 8 audience members sat around the table. Two rows of chairs accommodated the rest of the guests. There was no stage and the audience became a silent protagonist, as Michaela broke the fourth wall and interacted directly with the audience.

The bookshelves served as props –she was able to take out three tattered books, including The Crucible and The Scarlet Letter, to reference and read from. The experience of Scarlet Letters is very intimate. I was a mute participant in this piece, and how I felt about what she said to me was another layer of interpretation to the drama, which normally does not happen in more traditional theater. Her message was: “Women live their sin and suffer,” and she tried to convince me of that with examples, including the shaming of Hester Prynne, and the real life tribulations of some historical and contemporary women.

I must admit that I did not exactly agree with her stance on this and those thoughts accompanied me during the play. Because of the intimate performance space, I contemplated my own emotions about women’s suffering and their shame, and was engrossed in the world that we were all creating.

The music, lighting and costumes were also appropriate for the drama. Artificial candles (that looked real) on the table and on the mantle of the fireplace were utilized as well as a chandelier hanging over the table. Since the audience was part of the action and the room was part of the play, there was no need for any additional theatrical lighting.

Michaela’s costume was a long black velvet dress and black gloves. This was perfect for her timeless character. I enjoyed Michaela’s singing and I wish there had been more of it. The instrumental music for most of the play was repetitive, like a meditation under her speaking voice. This fit the action and setting of the play but was a little disconcerting to me after a while. Because of the repetition I wondered if I were being hypnotized! But that would also be justifiable with the action and the role of the audience as her clients.

Scarlet Letters is an erudite piece of theatre. It is thought-provoking and engaging. It does require knowledge of the The Scarlet Letter, as well as history, contemporary politics, and culture, to fully appreciate it.

Expect to ponder what Hester Prynne and other women have had to endure as you thoughtfully unravel and decipher a troubled past. Don’t miss the extraordinary performance of Michaela Shuchman. It’s a highlight of this years’ Philadelphia Fringe Festival. 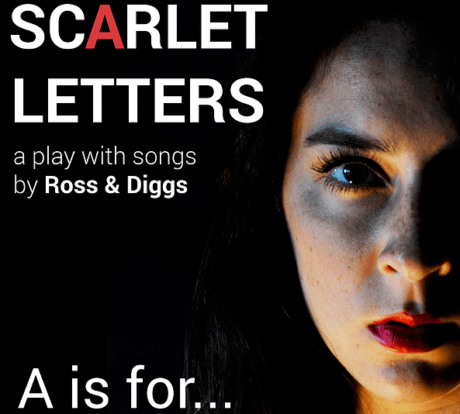 Scarlet Letters plays through September 24, 2016 at The 2016 Philadelphia Fringe Festival performing at Christ Church Neighborhood House – 20 North American Street, in Philadelphia, PA. For tickets call the box office at (215) 413 1318, or purchase them online.