If you have to take a gamble with your theatrical options this weekend, this reviewer bets you will thoroughly enjoy the classic musical comedy Guys and Dolls at the Old Opera House Theatre Company!

Beautifully directed by Caroline Cash and featuring outstanding musical direction from Alison E. Shafer (and amazingly, only a six member band which sounds like a thirty-piece swinging orchestra from the Big Band era), Guys and Dolls is a consistently entertaining musical comedy featuring phenomenal comedic performances from leads and ensemble alike.

With music and lyrics by Frank Loesser and a book by Jo Swerling and Abe Burrows, Guys and Dolls tells the story of two separate couples intertwined in New York City in the 1950s. Small time gangster, Nathan Detroit is in need of some cash to fund his “permanent floating crap game” and save up enough to marry his fiance, the showgirl Miss Adelaide (after being engaged for fourteen years). Nathan bets big time gangster, Sky Masterson, that Sky can’t get straight-laced, religious mission worker, Sarah Brown, to go out on a date. Sparks fly when Sky seems to win the bet and convinces Sarah to accompany him to Havanna, Cuba, after realizing he may be the sucker after all as he falls in love with Sarah!

Jaymie Price is excellent as gangster Sky Masterson. His smooth vocals and charmingly sincere attempts to woo Sarah Brown were wonderful and Price had a standout moment with a powerful performance of “Luck Be a Lady” in Act II.

As the “mission doll,” Sarah Brown, Hope Wolford is simply a delight as a devout, pure charity worker. Her sincerity and innocence shines through her stand off-ish portrayal, making the moment when she cuts loose in “If I Were a Bell” a very entertaining number.

Steve Brewer is wonderfully over-the-top as charismatic and hilariously incompetent gangster, Nathan Detroit. Some of his facial expressions were laugh out loud funny and his outstanding comedic timing shone through in some brilliant delivery of Nathan’s famous one-liners.

Christine Galante steals the show as nightclub dancer Miss Adelaide. Galante’s hilarious squeaky character voice and sexy dance moves delighted, especially during her adorable performance in “A Bushel and a Peck”. And her famous solo, “Adelaide’s Lament”, predictably brought the house down and nearly stopped the show. Galante and Brewer shared an outstanding chemistry and some of their comedic fights were the highlight of the production.

Ed Conn and Charles (Joey) Thorne share a wonderful camaraderie as Nicely Nicely and Benny Southstreet. Thorne is consistently amusing with his comedic antics and Conn does a phenomenal job with one of musical theater’s most famous character roles, particularly with some fantastic new choices in his showstopper “”Sit Down You’re Rocking the Boat.”

As the head of the Save A Soul Mission, Gail Farmer is predictably stuffy and very proper as stern General Cartwright. Andy Kiser is a very warm and caring Arvide Abernathy. Charlie Perkins shines in the obnoxious character role of Lt. Brannigan with a very convincing Irish brogue.

Choreography, also by Caroline Cash, is crisp and clean, with impressively intricate routines for the two Hot Box dance numbers.

The set, designed by Lee Hebb, is an impressive patchwork of various marquees (many with functioning, moving “flash bulb” lights) and storefront signs against the New York City skyline. Costumes by Sue Brownsmith, evoke the feel of the post World War II era with many bright colors and period appropriate suits, skirts and dresses, while still allowing for plenty of movement in the dance sequences.

Travis Fouche’s lighting design is crisp and clearly displays the difference from the outdoor New York street scenes to the spotlight and “show business” worlds of the Hot Box Club and the Havanna nightclub. Sound, designed by Rico Massimino, has a particularly impressive echo and reverb effect when the gangsters are supposed to be in a sewer prior to “Luck Be a Lady” in Act II.

For some delightfully comedic performances in this classic musical comedy, don’t miss Guys and Dolls at the Old Opera House. 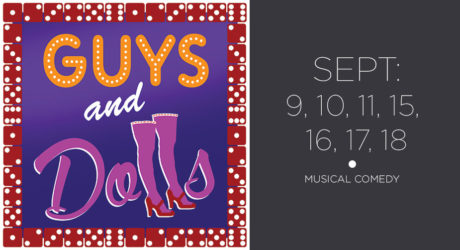