Othello is a story that shows the darkest places jealousy can take a person. Othello, a Moor, was a successful general in the army of Venice. He fell in love with and married a lovely young woman named Desdemona, the daughter of a Venetian nobleman. Othello’s ensign, Iago, was passed over by the general for a promotion that would have made him second-in-command. He did not take it well. In fact, his rage at Othello propelled him to undertake vengeful schemes that hurt pretty much every person he knew. They also drove Othello – a war hero and an upstanding, principled man – into a jealous kind of madness of his own.

Jason B. McIntosh played the title role with compelling gravitas. I last saw McIntosh in August Wilson’s Fences. He was so natural and easy-going in the role of Bono, I thought I might see a glimpse of that man in his Othello -some small gesture, manner of movement, or pattern of voice. But there were none. McIntosh’s metamorphosis into Shakespeare’s commanding, tragic hero was complete. With straight posture and head held high, McIntosh’s physicality expressed his character’s irreproachable nature as clearly as his words did. It made his anguishing portrayal of the fall of the stately general into a morass of doubt, anger, and jealousy even more heartbreaking and frightening.

Jose Guzman, as Iago, was diabolical perfection. He crept and slithered, prowled and pounced like every vile, dangerous beast you can imagine. Weaving in modern gestures and familiar facial expressions, Guzman brought Shakespeare’s 400-year-old villain to life in an unsettlingly plausible way. It would be easy to let one’s portrayal of a character as malevolent as Iago become a ‘Snidely Whiplash’ caricature of a person. Guzman avoided that trap, instead showing the audience how, by changing his physicality and modulating his voice, Iago was able to convincingly sell all the versions of himself necessary to affect vengeance on his foes. When Othello believed he was a dutiful, honest subordinate, it didn’t feel like he was being blind or dumb. It felt like he was being played by a sociopath with a good understanding of psychology and a really big chip on his shoulder.

Diane Curley made a convincing Desdemona. She exuded an earnestness and strength of character ideally-suited for this role. She embodied the myriad requirements of being a noblewoman and wife beautifully, portraying Desdemona as strong, but obedient; persuasive, but not wheedling.

Among the other notable performances was Elliott Kashner, as poor, gullible Roderigo. Kashner had a Disney Prince kind of charm as he followed Iago’s (mis)lead on how to win the heart of Desdemona. He brought much needed levity to an intense show with his scene-stealingly funny physical comedy as the simple, but sweet, wanna-be suitor.

Stephen Lopez also stood out, as the Duke of Venice, a character he played with the dignified, confident air of one accustomed to ruling. Lopez’ skill with Shakespearean language was impressive, especially in the Council Chamber scene where he was meeting late at night with some Senators and Officers and ended up settling a family dispute between Desdemona’s father and Othello. He skillfully expressed his concern about the war, his weariness with the hour, and his frustration with the racist accusations of Brabantio (Jeff Keogh) against Othello. And he did it all in Iambic Pentameter. He was so memorable in that role, I wish he didn’t also show up in a later role as Desdemona’s cousin, Lodovico.

Briana Manente, was terrific as Iago’s wife, Emilia. It was her final scene that put her on my mental List of Actors to See. No Spoilers, but the way she showed Emilia’s passion and courage made the scene positively inspirational.

The show was also great on the technical side of the curtain. Scenic Designer Daniel O’Brien’s set was elegant in its simplicity, using wood stained in different hues to create a background stage for the action, as well as facilitating offstage rooms and a lovely balcony. Doubling as Lighting and Technical Director, O’Brien used large panels of fabric and well-designed lighting schemes to bring the cast from Venice to Cyprus and from Council Chamber to bed chamber.

Jacy Barber’s Costume Design was lovely and contributed significantly to the Mediterranean/Arab vibe of the show. My favorite was the outfit that Desdemona wore on Cyprus. The dress was shimmery as it flowed when Diane Curley moved around the stage. The gold headband and colorful, flowing veil topped off the costume beautifully.

Director Ian Gallanar not only made skillful decisions about the performance on stage, he also realized what putting on a show like Othello in Baltimore City in 2016 means. As so many African-Americans experience in the modern day United States, it didn’t matter that Othello was a decorated war hero, a great leader and a good man. When many people saw him, he was simply “the Moor” – a black man. Racism appears throughout Othello and Gallanar has taken the opportunity to address it instead of just pretending it’s not there.

Chesapeake Shakespeare Company’s production of Othello is bold, well-acted and directed, and it feels new. They are definitely starting their 15th season on a high note. 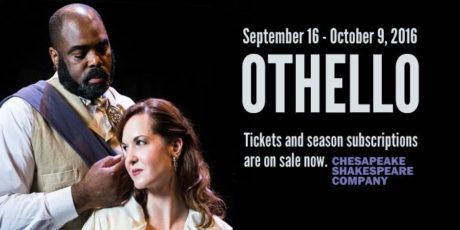 Othello plays through October 9, 2016 at Chesapeake Shakespeare Company – 7 South Calvert Street, in Baltimore, MD. For tickets, call the box office at (410) 244-8570, or purchase them online.
__
Note: Chesapeake Shakespeare Company has several events in conjunction with this production. Click here for more information on their programming called ‘The World of Othello.’

Note: Parking is available at a covered garage less than two blocks away. With a special voucher obtained at the theater during the show, it is only $5.00.