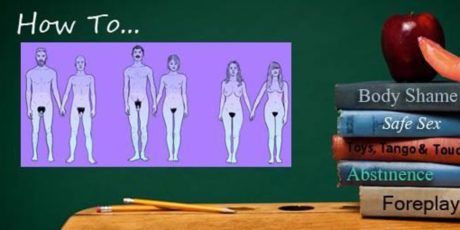 Along these licentious lines, Rabble Crew has produced two weekends of pop-up playlets collectively titled How To…Sex Education at the DC Arts Center black box in Adams Morgan. Each weekend features a different bill of four 15-minute one-acts staged by DC-based writers, directors, and actors. I attended the first one and (no double entendre intended) found more than enough pleasures to want to come again.

Clara and Ike are biking to an ABC store from a party where Clara got so wasted she should  not be operating machinery of any kind. Their quite funny dialog, a lot of it sending up  liberal do-gooderism, includes jokes such as one about her mishearingracing for racist. It’s made all the more amusing by Farrington’s loopy out-of-it-ness. At issue is whether they are a match. “I don’t want to live in your normcore world!” she tells him. Then Clara insists he feel her breast. He obliges. Distracted, they crash, their bikes are totaled, and she lands banged up and delirious in a hospital bed with Ike loyally at her side.


The satiric setup is very clever:  A sex-education class in the Plymouth Colony led by a pious scold of a preacher named Goodman Mather. The students dutifully learn their lessons, but their class is interrupted when Goody Tituba arrives and takes over. Goody, in a very funny performance by Yvonne Paretzky, rips into their repressive lessons with hilarious anti-oppression sexual-liberty stuff from today: “The Devil is a white construct to suppress women and people of color!” “Adam and Eve is a gender-biased fairy tale!” Don’t buy into “hegemonic masculinity”!


A very noir tale with knife-like twists. Samantha (called Sam) drops in on David to exact revenge. He’s a university professor who dumped her when he took up with a student, the type he regularly fucks. What drives Sam round the bend, though—and what makes Julie Herber go all Fatal Attraction—is that David dumped her by email! Rachel, the younger woman, shows up. Sam is packing a knife in her bag. There will be blood. The big surprise is who dies how.

Running Time: One hour 20 minutes, including one intermission.

The four one-acts on the bill for next weekend are: