Climate change is a sharp pointed object in the current 2016 political season. The language strewn about is often hot and more often than not, ad hominem to say the least  But climatic issues are not new as an American political item. And the arts have been a force to bring the issue to the attention of those who may not be personally affected, or think themselves not. 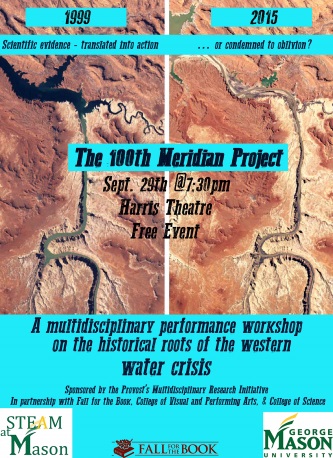 Many Baby Boomers will recall the great literature and art that they studied in school of the “Dust Bowl” of the 1930s. Some might even personally recall the mean spirited terms, “Okie” or “Arkie” from their own family history. Whether Baby Boomer or Millennial, the iconic works of John Steinbeck’s The Grapes of Wrath or James Agee’s Let Us Know Praise Famous Men.  And finally, there was the Depression era, Federal Theater Project, though often emphasized what was happening to the less fortunate in America as something the government should be doing. But, now, all that is likely just dry “meaningless” history, from 80 years ago.

So, today what are the arts saying about the issues of climate change?  Well, the George Mason University Provost’s Multidisciplinary Research Initiative in partnership with Fall for the Book, the College of Visual and Performing Arts, and the GMU College of Science has developed the The 100th Meridian Project. It will tackle one aspect of climate change as a multidisciplinary performance workshop on the historical roots of the western water crisis.

Rick Davis, Project Director and Dean of the College of Visual and Performing Arts at Mason stated that, “The 100th Meridian Project takes Wallace Stegner’s 1954 book, Beyond the Hundredth Meridian: John Wesley Powell and the Second Opening of the American West as a point of entry to a river more complex than the Colorado – the river of American history, whose tributaries include science, policy, finance.”

It is an effort to understand why John Wesley Powell’s 1870’s recommendations, when director of the United States Geological Survey were ignored. Powell thought, “the arid West was incapable of supporting substantial human populations at any distance from the main water sources.” Noted Davis. “Are there contemporary parallels to past centuries’ willful rejection of sound scientific guidance?” added Davis.

The Meridian Project is meant to illuminate the western United States water crisis issues for current generations. The project will bring together students and faculty from the sciences, arts, and humanities, to tell the story of water ecology, land use, and public policy up to our current time and place.

The 100th Meridian Project will present a one-hour multi-media performance, uniting science and art, to bring this critical problem to a general audience. Exhibits, seminars, and interactive media will surround the performance to engage further with this rich network of stories and issues according to Davis.

Davis hopes that, “Audience members will gain new insights into how science is communicated, translated into action, or condemned to oblivion. Through The 100th Meridian Project, we hope to create a collaborative research protocol that can be applied in an ongoing process to any number of critical issues in the contemporary world.” The project is supported in large part by Mason’s Multidisciplinary Research Initiative, and is a collaborative effort, reflecting scientific exploration and artistic expression led by the College of Visual and Performing Arts, the College of Science, and Fall for the Book, with contributions from the School of Art, the School of Theater, the Department of Environmental Science and Policy, the School of Music, and The English Department. Additional project partners include STEAM at Mason, the Volgenau School of Engineering and the Department of Atmospheric, Oceanic and Earth Sciences.

The 100th Meridian Project: A Performative Collaboration of Science and Art on the Historical Roots of the Western Water Crisis takes place on Thursday, September 29, 2016 at 7:30 PM at The Harris Theatre on the George Mason University’s Fairfax Campus – 4400 University Drive, in Fairfax, VA. Admission is free. More information is available online.