One of the things I love most about the burlesque and sideshow community is the sheer love for the craft and joy of performing that shines through when performers talk about their chosen artform.  And then there are those for whom shine seems like too weak a word – it supernovas through!  That’s what I felt when I had the chance to chat with Frankie Sin and Donny Vomit about their upcoming show Shocked and Amazed:  Strange for Hire at Amp by Strathmore this Saturday, the 24th at 8 PM. Doors open 90 minutes before the performance for food and drink.

Lucrezia: So first things first – intros – name, tagline if you have one and when and why did you get into burlesque/sideshow.

Donny: Mr. Donny V, The Gentleman Oddity. I started sideshow in my late teens. All my friends were musicians. I couldn’t sing or play guitar so I started doing sideshow stunts to open for local bands. I managed to stick with it until my mid-twenties when I joined the Sideshow in Coney Island.  That’s when I went Carny Pro.

Frankie:  Frankie Sin. I grew up watching old technicolor musicals, idolizing that yummy old Hollywood glamour.  My background in dance started when I was a tot, lasting my whole life from ballet, tap jazz to bellydance .. so I decided I wanted to basically grow up to be Gene Kelly … in a dress! Then throw the striptease on top. I live for dancing and costuming!

How did you two meet?

Frankie: We met on tour years ago with a traveling burlesque troupe we were both in and I instantly fell for his cutie carnie charms.

Donny: Then we ran away to start our own circus.

Frankie: I know, right?!  It’s literally my childhood dream to run away with the circus. Having the ultimate partner in crime on and off stage is incredibly dreamy to say the least.

Speaking of circus, you all are currently doing three shows a day with Hellzapoppin as part of Riot Fest. What’s that like?

Frankie: It’s bonkers. Pinch me I’m dreaming bonkers. The crowds are incredible, the feel of performing under a real big top is unlike anything else. The days are long, and your body wants to collapse from pure bliss and exhaustion, but we wouldn’t trade it for the world. This show family is a truly magical bunch.

Donny: Plus putting up a circus tent is a great workout. Doing three shows a day is also a good way to nail down new stunts.

What acts are you all doing?

Donny: You know the usual – sword swallowing, human blockhead, escape arts, cabinet of death, chainsaw juggling, whip cracking, along with the best rump shaker around, Frankie, doing classic burlesque numbers … as one does on a Saturday night.

How do you physically prepare to do that for three shows a day?!!

Frankie: I’m kind of a rigorous perfectionist and rehearse acts every day, do tons of yoga, daily bellydance drills and even my own version of car yoga ‘cause sometimes you’re literally driving 13 hours to a gig! You sometimes just have to muscle through the best you can.

Frankie: Dream act, oh holy moly, anything ginormous, covered in rhinestones that I can climb, dance or swing around on. I’ve love to also delve deeper into higher end illusions. All of what we do onstage is absolutely real but I’ve got the Siegfried and Roy itch – I want me some big sparkly magic stuffs.  Or is it more the David Copperfield mixed with Liberace itch?

Donny: Dream act? I have some underwater escape ideas that should be coming to fruition sometime down the road. And we want to get our hedgehog and cat into the show somehow.

There’s some amazing bands playing Riot Fest. Have you met anybody?

Donny: We have been able to see some amazing acts so far.  We ran from our tent directly to see the Misfits and can’t wait to catch the Flaming Lips tomorrow.

Frankie: Lots of amazing folks to be sharing the bill with here at Riot Fest! But our eyes are already on the horizon – we’re super stoked to be teaming back up with Shocked and Amazed and our gal Alex from Atomic Doll Productions for the upcoming show at the Amp by Strathmore. Alex and James are two of our favorite folk in showbiz. It’s going to be a blast.

Donny:  Both of them have done so much to help promote and preserve sideshow culture.  We will follow those crazy fools anywhere.

And that show is just the two of you and Francis Menotti? 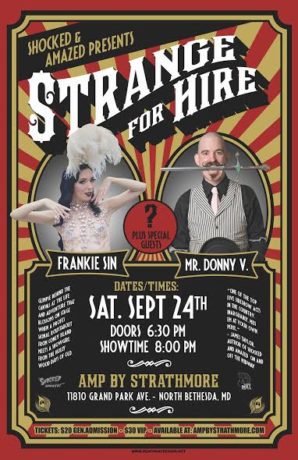 Frankie: Yes indeed! We’re super excited to have Francis as our guest.  The three of us have a full evening of surprises in store for y’all.

Donny: We developed a more intimate show while we spent a year in New Orleans bringing the big top to the small stage.

Frankie: One thing I love most about our show is that we make people feel safe while watching potentially scary acts. It’s a lot of rhinestones, smiles and quick wit.

Donny: And a few stupid stunts.

Frankie: So true. There’s nothing more important to us as performers than making an audience smile. I think going to a good show is all about pure escapism, not a care in the world for what lies behind you beyond that theatre door. It should give ya the warm fuzzies and a twinkle in your eye when the curtain comes down.