Zany, gut-wrenching and stimulating, Bryant Edwards’ The VS. Series features five vignettes, each helmed by different writers and directors. In order, these matches are Miley vs. Mozart, Rat vs. Exterminator, Mother vs. Daughter, Movement vs. Stillness, and Peanut Butter vs. Jelly. Staged in a boxing ring at the Arden’s Hamilton Family Arts Center, with the audience on either side, each scene ends with a well-choreographed battle. The clever twist? Each victor is pre-determined by the audience members, who vote before the show starts! This essentially means that the cast must have two versions of each piece memorized and ready to go.

The talent of the players was immediately imminent. Half played instruments and sang, and while all absolutely shone in their respective roles, the most striking performances were those of the captivating Patrick Romano, versatile Chris Garofalo, and gripping Sarah Heddins. To show one’s vulnerability onstage is a true feat, especially when it comes to productions like this, where the audience is two feet away from the performer. They were placed at various levels and angles by a smart team of directors, who made sure to stage the actors in a way that dually crafted the stories and aided the spectators’ sightlines.

With the aid of subtle but potent lighting and sound, the production was a stirring mix of heartbreak and humor. Edwards and his team placed the most solemn piece at center and most outrageous at its extremities. I’m talking undead Mozart (TJ Harris) literally stabbing Miley Cyrus (Francesca Piccioni) with a dagger-like baton. Both the MC (Nina Starner) and audience ebbed and flowed with the tone of every story; at one point chuckling at a constantly flailing prince (Edwards), at another, gaping at the ever-changing power struggle between mother (Heddins) and daughter (Piccioni).

Beyond concepts like a personified whiskey-guzzling Peanut Butter (Garofalo) and wine-sipping Jelly (Emily Fernandez) as ex-lovers (and that was just one scene!), The VS. Series was about the common ground between opposing parties. This theme is best embodied by an intellectual rat (Romano), who speaks to his wobbly exterminator (Garofalo): “You’re made of the same organic matter as all others on this planet. How can you possibly place yourself above all other beings?” 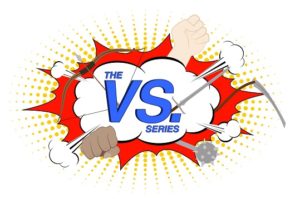 The Vs. Series plays through September 24, 2016 at The 2016 Philadelphia Fringe Festival performing at the Arden Theatre’s Hamilton Family Arts Center – 62 North 2nd Street, in Philadelphia, PA. For tickets, call the box office at (215) 413 1318, or purchase them online.