One of Northern Virginia’s bright jewel arts events, ARTS by George! returned to the Center for the Arts, George Mason University Fairfax campus with plenty of sharp, crisp, musical style from the headliner performers, Broadway’s The Midtown Men. The house was packed with nearly 2000 enthusiastic patrons and not just Baby Boomers such as myself but plenty of college students enjoying themselves as well.

The Midtown Men concert was a sunny upbeat delight. This was no mere, “call-it-in” oldies-but-goodies event with four guys who could mimic across many a musical genre beyond The Four Seasons. There was a smooth ease about the evening. It was a concert with legendary ‘60’s music well-delivered by very highly skilled, authentic, entertainers, who danced up a storm on stage while truly seeming to not only enjoy what they were doing, but lit up the crowd with their winning personalities. And they were accompanied by a smokin’ 7-member rock band.

If you don’t know The Midtown Men, they are the originals who knocked-out critics and audiences in the Tony-winning Broadway musical Jersey Boys, about the The Four Seasons: Tony Award winner Christian Hoff, Michael Longoria, Daniel Reichard and Helen Hayes Outstanding Lead Actor nominated J. Robert Spencer (for his work in the musical Next to Normal during its Arena Stage run).

A key factoid: the College of Visual and Performing Arts serves over 8,000 students including about 1,450 major pursing undergraduate and graduate degrees.  Those are impressive enrollment numbers.

“We call it ‘An Evening Like No Other’ because that’s literally true,” said Rick Davis, Dean of George Mason University’s College of Visual and Performing Arts (CVPA) in an earlier interview,”Where else can you see inspiring work by young artists in every imaginable form and style….and support such a worthy cause — student scholarships as well as the great Performances at Mason’ season.

In an interview, “ARTS by George!” Co-Chairs Merrill and Mark Shugoll, they both spoke passionately about the event that benefits “the exceptionally talented students who are supported with scholarships who might not have been able to attend the University without support. They are our future leading artists and arts administrators.”

The College of Visual and Performing Arts attracts, “the future leading artists and arts administrators and patrons will be able to interact with them at the gala.” added the Shugolls. “We want the students to know that we adults are behind the scenes supporting and caring about them. We want them to succeed. We are pulling for them.”

One of the wonderful things about ARTS by George! are the student showcases and entertainment sessions before the headliners and accomplished in various locations on campus. Each provides the CVPA students an opportunity to perform and show their stuff. I visited a number of these awesome student performances including several dance (one led by GMU professor Christopher d’Amboise), music, and musical theater. I left each one with a big smile.

One student I interviewed was Bryan Shaw (Burke, VA and Lake Braddock Secondary School graduate). He is a student of computer game design at CVPA. Shaw received a scholarship funded by ARTS by George! so he could attend a major game developers conference that added to his real world experiences about human-computer interactions. George Mason University hosts the “Serious Game Institute” that concentrates on game-related applied research in fields such as medicine, education, and security. The school works with government agencies, non-profits, and for profits.

Now, back to The Midtown Men. As the audience learned from stories and patter, they decided to perform together after their stint with Jersey Boys ended. From the backstories we heard that each of them had a noteworthy musical career career from before after their time together in Jersey Boys. They each loved 1960’s music well beyond the Four Seasons songs. So, they developed their own act and now have performing in concerts all across America over 600 times over the past years.

Their concert was wall-to-wall of appealing, tight musical and spot-on choreographed harmony propelled by a seven-piece band, bursting-forth with horn-and sometimes flute dominated arrangements – and all filled with charming personal chemistry and the non-stop energy of the performers.

Without giving away the entire jukebox playlist The Midtown Men cover ranged from some of the best known falsetto-signature songs (with lead performed by Longoria) of Frankie Valli and The Four Seasons: “Big Girls Don’t Cry,” “Sherry,” “Can’t Take My Eyes Off of You,” “Oh What a Night,” and “Bye Bye Baby”) to the The Beatles (Can’t Buy Me Love, In My Life); the West Coast sounds of the Beach Boys and the Mamas and the Papas; as well as Motown performers such as The Temptations, The Four Tops, Smokey Robinson, The Jackson 5, and Marvin Gaye and Tammi Terrell (Ain’t No Mountain High Enough). East Coast music groups were well-represented including The Turtles (Happy Together), and the girl-group The Ronettes, as well as the Association. And the transitions between songs and genre, were impeccable, both singing and choreography.

Did I have favorites? Of course, but, this is one of those to each their own. For me songs that got to my heart and mind included the unmistakable sounds of The Animals’ Time of the Season,  the Buffalo Springfield’s For What It’s Worth and the Rascals (Groovin’). As I left the concert it was clear that everyone had their own take on what songs got to them.

For added audience pleasures, there was projections that added visual nostalgia to the evening. In Act I the projections took on the quick pacing and editing of the Beatles black-and-white movie, A Hard Day’s Night. For Act II the projections gave the audience more insight into many of the Motown groups that The Midtown Men covered. 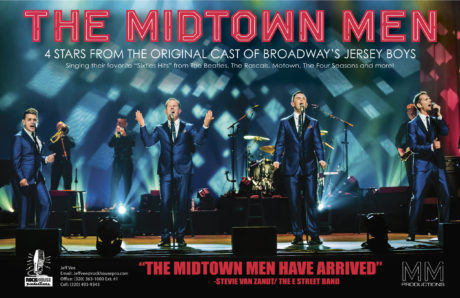 As a further delight, there was a catchy musical interlude for all the Boomers in the audience as intermission ended. The band played renditions of TV theme songs from shows of the era running from Hawaii 5 O to The Man from U.N.C.L.E, The Pink Panther, The Twilight Zone, Batman, and others.

It was an out-of-sight, full-tilt winning evening with The Midtown Men that benefited emerging arts stars of the future. Least you think not, think this name: Sasha Hollinger  a College of Visual and Performing Arts grad is now on Broadway in Hamilton. Through a video she thanked the audience, for she had an ARTS By George! scholarship that helped her with her education.

The Midtown Men performed on Saturday, September 24, 2015 at 8 PM at ARTS BY George! at George Mason University’s Center for the Arts – 4373 Mason Pond Drive, in Fairfax, VA. For upcoming events at The Center for the Arts, check their calendar of events.