He is one of my favorite actors and now Craig Wallace has received rave reviews and standing ovations for his riveting and tour de force performance as Louis “Satchmo” Armstrong in Terry Teachout’s Satchmo at The Waldorf, which ends its run this weekend at Mosaic Theater Company of DC.

Joel:  What is it about Louis Armstrong that fascinated you that made you want to play him on the stage? Do you play the trumpet and/or any other instruments?

Craig: I don’t play any instruments. What fascinated me about him was how little I knew about him other than, “Hello Dolly” and “What a Wonderful World.” The research I did while I was rehearsing introduced me to another side of him that I didn’t know and I found that attractive.

How many one-man shows have you performed before starring in Satchmo at the Waldorf? And what have you learned about yourself as an actor starring in this one-man-show?

I’ve never done a one man show before, and what I’ve learned is that it takes stamina to sustain an evening all by yourself for 80-90 minutes.

What did you learn about this man that you didn’t know before you took the role – which now fascinates you?

Just how generous he was and how socially conscious he was. Also, prolific he was in terms of music, playing music and inspiring other musicians.

What scene in Satchmo… is your favorite and which one is the most difficult to perform and why?

There is no favorite, it’s all one to me. The most difficult part of the play is the last 10 minutes; because it’s a marathon. It’s easy to lose energy because you know you are so close to the end. But there are no favorites because it’s an ongoing thing.

What was the first song you heard him sing?

“What a Wonderful World.”

The why is based on what’s written. The playwright gives me clues as to who they are, once we established that it became about how this person sounds, the rhythm of their speech, how do they stand. Finding each one of those individually allows us to identify each character and differentiate them from each other.

Playwright Terry Teachout did not want you or anyone else playing the role to impersonate these men, so what advice did he and your director Eleanor Holdridge give you on bringing out ‘the essence’ and ‘physical presence’ of these men and their personalities?

Terry spent time with us in rehearsal, but he was more interested in what we were doing rather than have him tell us what he felt it is. In essence, Terry didn’t give us any advice; he would sit in rehearsal and watch us rehearse and he really sat back and absorbed. We appreciated it because he was very supportive.

The thing about an actor, is you have to love all your characters. So, I embrace their opinions and their personality. It’s for your audience to judge them. I have to love them because if I don’t, I can’t convey them to you so that you can figure out if you love or hate them.

How did all your experience performing in Shakespearean productions help you to prepare and perform your role as Satchmo? Are their any roles that you have played on the stage what were very Satchmo-like? And how were they Satchmo-like?

Because it’s a one-man show it’s language based. Language is the foundation of the piece so, having worked with classical text, learning how to keep the language buoyant and forward moving has really helped. Similar to how Satchmo says “West End Blues” has everything he learned in music in it, it’s the same for me.

Every character that I’ve played up into this point goes into  these characters. And I think it’s true for any role that an actor takes on, they pull from their past experiences to create new experiences.

Was Louis Armstrong ‘Lost in the Mainstream’? Why did he allow himself to be put in this situation and did he enjoy it? Are there any other singers or performers who you wish wouldn’t have become members of the mainstream?

I think that as you grow as an artist, you also expand your opportunities. I think that all he ever wanted to do was play, and as he got more popular he moved from small to big. And what happens, the people who began with you may feel left behind. I’ve never forgiven Lionel Richie for leaving the Commodores, because I felt like he was ours [the black community’s], but then he became everyone’s and his music changed. I’m a 70’s child and it affected me how our R&B groups went from being ours to everyone’s. However, that is my problem. I can say that I judge that but I can’t really be mad. I can only be mad because the music has changed as far as I’m concerned. I always say that I miss when Beyonce was black. I remember feeling a way when I felt like she became for everyone. And it can be said for music that part of the mainstream is watering down the groove.

And bringing it back to Louis, suddenly he was playing with Bing Crosby and all these other people, and the music had to change because the mainstream influence is gonna make the music something it wasn’t in the early days. But what I want to stress is, you can’t blame the artist. That’s what Louis struggled with, he remained pure in that, he wanted to make his music and do his thing and he was hurt that people hated him for it. He didn’t feel he was selling out, he felt like he was sharing his passion and doing what he did best.

What will you be taking away after you conclude the run of Satchmo at The Waldorf  and what do you want the audiences to take with them after seeing your powerful performance?

Once we complete the run successfully, I will feel proud that I did it. But what I want people to take away is that they learned some stuff and I want them to feel it was time well spent with these guys. The biggest compliment I get is when people say they want to go home and listen to his music. That’s greater than them saying “how great I am” because it’s about rekindling the legacy.

A Christmas Carol as Ebenezer Scrooge at Ford’s Theatre.

What advice do you have for a student who is considering acting for a living?

This is one of the questions where it is just my opinion and my opinion is, work hard. Work hard, do your homework, show up on time, take care of yourself, always be receptive to what’s going on around you because you never know. There are so many things from Louis that I’ve pulled from my life, same for Glaser. I met James Earl Jones a couple of years ago, right before I starred as Hoke in Driving Miss Daisy. He originated that role on Broadway. And he said to me, “You know who this guy is. He’s your uncle, he’s the guy down the street, he’s your grandfather.”

As an actor, every person you meet, every experience you have, every show that you see, you need keep that because you can use it. The reason that I say this is my opinion is because hard work was and still my path. For some beautiful person, they may not have to do any work to become a big star. But that wasn’t my path. I work hard and I started at the bottom. Since I joined equity, I worked every single year as an actor. I never had any other job other than acting and teaching and never worked outside of the theatre. That came from discipline, hard work and being where I was supposed to when I was supposed to be there.

I teach young people and I watch extremely talented kids come to class late or unprepared. And I say to them, why are you here? I’m here to share with you what I know being a professional actor. If you’re going to be a professional, that doesn’t work. If you want to do this, then do it. The classroom is the training ground, so train!

Satchmo at the Waldorf plays through October 2, 2016, at Mosaic Theater Company of DC performing in the Lang Theatre at Atlas Performing Arts Center – 1333 H Street NE, in Washington, DC. For tickets, call the box office at (202) 399-7993 ext. 2, or purchase them online. 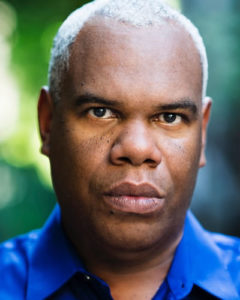 LINKS:
‘Satchmo at the Waldorf’ at Mosaic Theater Company of DC revieweed by Ravelle Brickman.

In the Moment: ‘Satchmo at the Waldorf’ at Mosaic Theater Company of DC by David Siegel.

Magic Time! ‘Satchmo at the Waldorf’ at Mosaic Theater Company of DC by John Stoltenberg.