This autobiographical one-man show Rent Control, which won the 2016 FringeNYC Award for Overall Excellence in Solo Performance, Evan Zes turns his comic eye and adult humor on two of the greatest challenges he’s faced in New York: being a struggling actor; and trying to support himself in a sky-high real-estate market. He does it by taking roles in out-of-town shows and financing his not-so-lucrative career with an increasingly lucrative but not-so-legal scheme of first subletting his empty bedrooms, then renting on craigslist and Airbnb, the rent-controlled apartment he lucked into (which was leased to a woman he never met) on Manhattan’s Upper East Side. And he recounts it all with unfailing charisma, spot-on socio-economic observations, colorful language, and sidesplitting impersonations of the more than two dozen real-life characters he encountered along the way.

Under the direction of Lou Moreno, the self-described “fuckin’ actor” with a “worthless MFA in fuckin’ acting” is eminently likeable (“But I was optimistic!”), completely natural, and thoroughly entertaining, as he delivers his true story in a jogging suit and squeakers (a reference to his love of clowning), at a rapid-fire pace, in direct address to the audience. He assumes the ethnic accents and priceless facial expressions of all the assorted friends and adversaries, neighbors and renters, theater artists and con artists who were inadvertently or knowingly a part of his fifteen-year real-estate hustle. When the authorities begin to close in on the scam, his wildly expressive eyes and body language register the mounting panic and sleepless nights he suffered. 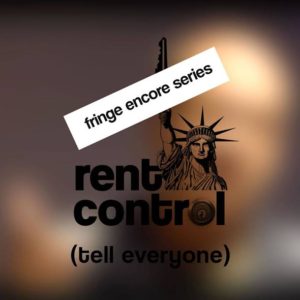 Supporting Zes’s stellar performance are hilarious images that punctuate his story on a projection screen to his left, with photography by Joe Osheroff and design by Paul Antoniades. Emily Auciello contributes a terrific sound design of buzzing doorbells, ringing phones, pounding knocks, breaking glass, and heavenly notes, all of which signal uproarious reactions by the “fuckin’ actor.”

Underlying the humor, Zes slyly acknowledges both the diversity and the economic disparity that define the melting-pot culture of NYC, and thereby makes us question if his behavior was pure greed, or resourcefulness in pursuing his dream while beating the (unfair) system. Those are issues to which a lot of people in the arts, and in New York, can relate, that visitors will find illuminating, and that will leave everyone (except, perhaps, the 1%) rooting for this delightful (if not 100% ethical!) underdog.

With this Fringe Encore Series run of Rent Control, we see a man who has redeemed himself and achieved his dream of being the featured actor in an award-winning show in New York. It’s more than a happy ending; it’s a happy new beginning that he made happen. Kudos all around to Evan Zes!