Amadeus, the late Peter Shaffer’s Tony Award and Academy Award-winning masterpiece opens this Friday, September 30, 2016 at the James Lee Community Center Theater and kicks off the Providence Players 2016-2017 season. In Part 4 of interviews with the cast and Director of Amadeus, meet Debora Crabbe and Bobby Welsh as The Venticelli.

Chip: Please tell our readers where they may have seen you appear on our local stages and roles you have played.

Debora: In the DC area, I have played the role of Natalie in Arcturus Theatre’s production of Distracted, and with The Conciliation Project, in Richmond, at the Atlas Festival in uncle tom: deconstructed.

Bobby: I’ve been working with PPF for the past five years or so. Most recently, I was in Snow White and the Family Dwarf and prior to that I played Trip in PPF’s production of Other Desert Cities. I also performed the role of Whit in PPF’s Of Mice and Men and the role of Jonesy in our production of Side Man.

Your role as the Venticelli presents a unique challenge because you have to be so synchronized – almost like two people playing one role. How have you approached it?

Bobby: Indeed, it’s unique! Like most actors, I memorize my cue lines, but because Debora and I go back and forth so much, I’ve basically memorized most of her lines as well! The trick is the timing and there’s no substitute for working the complete scene, then repeating it… A lot!

Debora: We run lines at every rehearsal. The Venticelli are basically talking like one person, so we figured out a way to make it sound like one sentence, just broken up between two people. Like friends who finish each other’s sentences.

The Venticelli operate mostly outside of the normal action of the play. How does your role support the story?

Debora: We are narrators I like to think. We carry the story forward and give little bits of information that influence the next scenes.

Bobby: The Venticelli are a brilliant mechanism for efficiently providing the audience with facts about what’s taken place between scenes, the moods of other characters, what rumors are swirling around the city, and key details–think births and deaths–that are essential to the plot.

As I have watched you two rehearse, I have seen great joy in your performances. What has been the most enjoyable aspect of playing the Venticelli and being a part of AMADEUS as a whole?

Bobby: Creating these interesting, fast-paced dialogues with Debora has been great fun. In addition, the rapport among the cast is excellent. Everyone is bringing their best, which inspires me to do that same.

Debora: The most enjoyable part has been working with Bobby. The ideas we have together are really fun. And the synchronization of our lines makes it all the more fun. The different actions that we do and how we tackle the script makes it so much fun to come to rehearsal each day.

For the most part, your production will not focus on traditional 18th Century costuming and design in an effort to convey the timelessness of the work. How do you feel about this direction?

Debora: I like it. I think the period pieces can be fun, but when other elements are brought into the production, people tend to relate more because they aren’t just focusing on time period. They are looking past the costumes and paying attention to the story even more. Like Shakespeare plays set in modern times.

Bobby: I think it’s great. It takes the play out of time and history. Trying to mimic the 18th Century can be a distraction from the heart of drama between Salieri and Mozart…and Salieri and himself!

How has Director Julie Janson helped you and the cast to mold your performances?

Bobby: Julie has been great at helping us find motivations for our characters that extend beyond the lines on the page and bring out a more layered performance, like the sense of competition between the Venticelli.

Debora: Julie has been very exploratory with the performances. As opposed to some directors who have very specific actions and line delivery, Julie has given us the freedom to develop our own characters, and that gives us a great sense of creativity, which I love.

Debora and Bobby and the rest of the outstanding cast of Amadeus are on stage at The James Lee Community Center Theater in Falls Church, VA September 30-October 15, 2016. Photo by Chip Gertzog, Providence Players. What does AMADEUS bring to today’s audiences? Why should people see this particular run?

Debora: Amadeus brings an appreciation of music, the opera, and its history. It also brings great scandal and comedy, which I think the audiences will thoroughly enjoy. People should see this in honor of the great Peter Shaffer’s recent passing. I hope they enjoy!

Bobby: The show brings focus to the costs of ambition and revenge, as well as the remarkable, inexplicable quality of true genius. PPF’s production will present them in a fresh, energetic light with a talented cast and production crew. 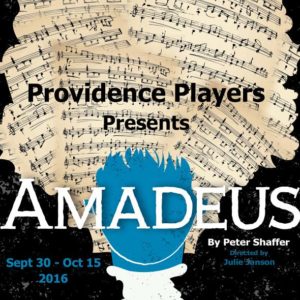 Swelling with the glorious music of Wolfgang Amadeus Mozart, this psychological mystery has played to thunderous applause the world over. The scene is set in Vienna, 1781: the young Mozart can write an opera a week but can’t control his exuberant giggling and notorious libido. Antonio Salieri–until now the royal court’s most lauded musician–recognizes Mozart’s genius, calling him “God’s magic flute.”

Pious, wicked, and soon to be guilt-ridden, Salieri tries everything to subvert the success of this enfant terrible. Will that include murder? Peter Shaffer’s Amadeus has won five Tony Awards including Best Play, and the 1984 film adaptation won eight Academy Awards, including Best Picture. Passionately adapted and inventively staged by Director Julie Janson.

Meet the Cast and Director of Providence Players’ ‘Amadeus’ Part 4: Debora Crabbe and Bobby Welsh as The Venticelli by Chip Gertzog.