It may be a little known, but hardly surprising, fact that the works of William Shakespeare have inspired more music than any other work of literature perhaps except for the Bible. The Bard’s most famous plays – tragedies and comedies alike – have served as muse to a litany of classical composers, including Beethoven, Liszt, Berlioz, Dvorak, and Tchaikovsky, to name a few, who has composed works inspired by Hamlet, King Lear, Romeo and Juliet, and more.

To honor this marriage of talent between music and muse, the NSO has put together a unique program series titled Shakespeare at the Symphony, a three-part concert series that brings to life Shakespeare’s words and the music they influenced with a selection of representative compositions. This evening’s program consists of three pieces, ranging in musical style but sharing one major commonality in their vivid audial awakening of their respective Shakespearean sources of inspiration.

The evening begins with Elgar’s Falstaff, Op. 68 – the piece’s first debut with the NSO at The Kennedy Center. Indeed, while not popularly performed compared to other of Elgar’s works, Falstaff is quite a unique and highly moving piece – moving in both its emotional range and the rapid speed through the different themes that represent the character Falstaff’s story.

Conductor Edward Gardner introduces us to the work and to Falstaff with a personal touch, noting Falstaff as a character, though not titular, is surprisingly memorable in Shakespeare’s repertoire as the incongruous, overweight, jesting companion of Prince Hal, who eventually becomes Henry V. Supertitles with representative phrases help us visualize the scenes the thematic music paints for us as we follow Falstaff through his progressively more despairing story – leading to a moving end to a colorful suite by Elgar, conducted with poignant purpose by Gardner. The maestro, no stranger to Shakespeare, is currently Chief Conductor of the Bergen Philharmonic Orchestra and was music director of the English National Opera for over eight years where he presented stellar productions that featured Shakespearean-inspired operatic works, such as Wagner’s Tristan and Isolde, to critical acclaim.

Following the intermission, we are treated to a return to the same world within Shakespeare where we left off with Falstaff: Henry V, but this time with William Walton’s Henry V Suite. Uniquely, Walton wrote the suite as the musical accompaniment to the film Henry V, a passion project he worked on closely with Laurence Olivier, who starred as the titular royal in the 1944 film. The suite is composed of five movements, each very different from the next as they represent scenes from the film, ranging from “Charge and Battle” with the thunderous brass of fighting legions, to “Touch Her Lips Softly and Part,” an elegant and milder telling of Mistress Quickly and the sharing of Falstaff’s parting.

Before we entered the rousing, stately “Agincourt Song” we are treated by Shakespearean actor Matthew Rauch to a special presentation of the famous “Saint Crispin’s Day” speech from Henry V, whence came the noted phrase “we band of brothers.” Rauch, classically trained at Harvard and Princeton and a veteran of Shakespeare theaters nationally, almost trembles in his increasingly impassioned acclamation as the new, young English king rousing his men to the just cause of his claim to the French throne just prior to the Battle of Agincourt.

The final piece is one very familiar to many a classical music fan – Tchaikovsky’s Romeo and Juliet Fantasy-Overture, the entrance to which, instead of the usual soft high strings, is this time actors William Vaughan and Audrey Bertaux’s declarations as the titular star-crossed lovers in the famous “wherefore art thou Romeo” scene.

Vaughan stands near the low brass, while Bertaux appears in Juliet’s balcony in the theater’s real balcony level. The two – both trained in Shakespearean theatre and veterans of these roles – present a flighty, excited, young, and very true representation of the young lovers and leave a deep impression in our minds as the NSO plays the first strands of Tchaikovsky’s romantic overture.

The NSO truly shines as we move through the tumultuous song, with an introduction, finale, and three thematic strands representing the lovers’ whirlwind story. The highlight of the evening is undoubtedly that lush, flowing, soaring love theme, first by the strings, then by the winds, leading into the timpani climax and slightly dissonant bittersweet chord at the close. A completely powerful, touching contrast to the balcony declaration so full of promise at the beginning – so intended by both Shakespeare and Tchaikovsky alike.

The NSO under Maestro Gardner’s baton transported us to an evening in the Bard’s theater without needing to leave our seats, showcasing a special collection of the inspired works by key composers, the range of which shows just how widespread and diverse Shakespeare’s influence is the history of classical music. For classical music and Shakespeare lovers alike – and especially for those who adore both – this series is unique and not to be missed. The series continues with “Ax plays Beethoven” from October 6-8, 2016, and “A Salute to Slava” from November 3-5, 2016. 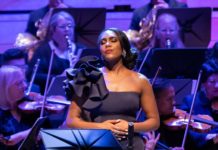 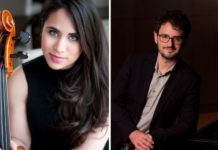 The stars align as Constellations returns to DC venue