Hedgerow Theatre captivatingly brings Patrick Hamilton’s Angel Street, directed by Cara Blouin, across the pond, into the year 1924 in Philadelphia where Bella Manningham (Jennifer Summerfield) and her husband Mr. Manningham (Jared Reed) are locked in a mad duel. Married but three years, Mr. Manningham has become increasingly upset with Bella’s inability to keep track of small items which he places in her care. Predicating his concerns with her family history of mental instability, he chides a fearful Bella for misplacing things and her constant forgetfulness, thereby deliquescing her self confidence into a pool of dim self doubt. Insidious tension ensues in this well paced thriller as Bella struggles with her condition, too ready to believe her husband, when a detective offers her key evidence to unlocking the truth that will ultimately set Bella free.

Gas Light, the original name of Hamilton’s 1938 English suspense, and of the infamous film version, inspired the use of the term “gaslighting” to indicate a type of abuse whereby a victim is psychologically manipulated to the point where they no longer trust their own mind, memories, or sense of sanity. This heinous practice is not relegated to any place or time, or gender, and can take guise under many false cloaks, including concern, sympathy, even compassion.

Jared Reed, in the role of Mr. Manningham, gives an excellent portrayal, via physical and facial expression, and voice modulation of the techniques and attitudes of such an abuser.

Jennifer Summerfield demonstrates her acting range deftly focusing in on the myriad of emotional change Bella Manningham experiences throughout the piece.

Brittany Holdahl gives an nice edge to her detective character, Kate Rough, providing a fascinating antithesis to the period trappings, spiking the suspense upwards. The relationship between Bella and Rough, who readily offers Bella a shot of confidence, adds a diverse dimension which intriguingly echoes throughout the play.

Allison Bloechl puts superb sass into the saucy maid Nancy, and Susan Wefel as Elizabeth, especially when cat-like, expertly evokes laughter, releasing comic relief like a genie from a bottle. 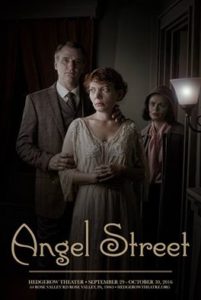 Mark Swift and Josh Portera swoop in, respectively, as Officers Booker and Oshaughnassy, towards the end as Bella realizes that her husband’s interpretation of her sanity may be wielded as a double-edged sword.