Sun King: A lot of things went into the creation of 43 1/2. Ever since high school, I’ve had an interest in Shakespeare and classical works. It’s creation also came from a time I was getting more involved with the Capital Fringe Festival and all that that can offer. But the biggest influence was working with 43 1/2 cast members Ricardo Frederick Evans and Jenna Berk on an educational Shakespeare “best of” show. We traveled to schools, performing in cafeterias, classrooms, common rooms (once in a youth detention center) and occasionally even in theaters. As fun and amazing as that was, the most fun for me was the backstage chatter, the misreading of lines, the ridiculous characters that we made up just to entertain each other and to gear up for another show. I wanted to bring that experience from the backstage (kitchen, phys. ed. closet, teacher’s lounge, or whatever) forward to the stage, and let the audience get a taste of that forbidden fruit.

As for why I chose to focus on Death as my “best of” theme… I think I’m still figuring that out.

What has surprised you about working on 43 1/2?

What still and always surprises me when I start working, as an actor or a director, with any of his 400 year old scripts. That Shakespeare still has things, great and relevant, to say to any heart that’s open and listening for it. Listen very closely… {insert fart noise here} Surprise!

What is one of your favorite moments from this rehearsal process?

Choosing a favorite moment is hard. This play is already a collection of all my favorite moments, and the cast always has new and brilliant turns for them to take. But if I had to choose one, Bess Kaye brought something really new to the end of the first act in rehearsal the other day. It made everyone in the room stand in silence for a minute. One of the best things about comedy, is that it can help ease you into a really honest and true moment. I can’t wait for an audience to see this.

What is your favorite line in the script right now?

O yet defend me friends! I am butt hurt.

What can I say? I love the classics.

How has this production changed from its first incarnation at the 2013 Fringe Festival?

One of the things that colors a lot of my thinking and direction on 43 1/2 is how every show is a life cycle. It’s born, it grows in rehearsal, then blooms in performance, then closes and dies, and the carpenters come and rip the set down. Birth to Death. Remounting any show will never be the same, even if that’s what we were trying to do. It’s like trying to raise your second child exactly as you raised your first. It is great to have a sense of what has worked before, so the biggest change really is that we can start with a lot more stuff we know works, and build on it. We’re also able to take a few more risks. I’m really trying hard not to give anything away.

You should come see it because, as the City Paper said of us:

Those who’ve studied Shakespeare will surely enjoy (this production’s) take on the range of tragedies presented in this thrilling and hilarious format.

Nicole Cusick said in her ‘Best of the Capital Fringe’ and 5 star review on DCMetroTheaterArts:

A theatre production that ends with the actors giving the front row a plastic sheet because they are in the “splash zone” is not your typical Fringe experience, but this production of 43 and a 1/2: The Greatest Deaths of Shakespeare’s Tragedies is not to be missed….Under the direction Sun King Davis (who also created this piece) they all worked hard to make one of the best productions in this Festival…Let’s let them have their pie, and eat it too.

But for the rest of us, those fun, stabby, low-brow bits provide the same entertainment with twice the fake blood. 43 1/2 has something for everyone, laughs for anyone, and chills for the Halloween Season! 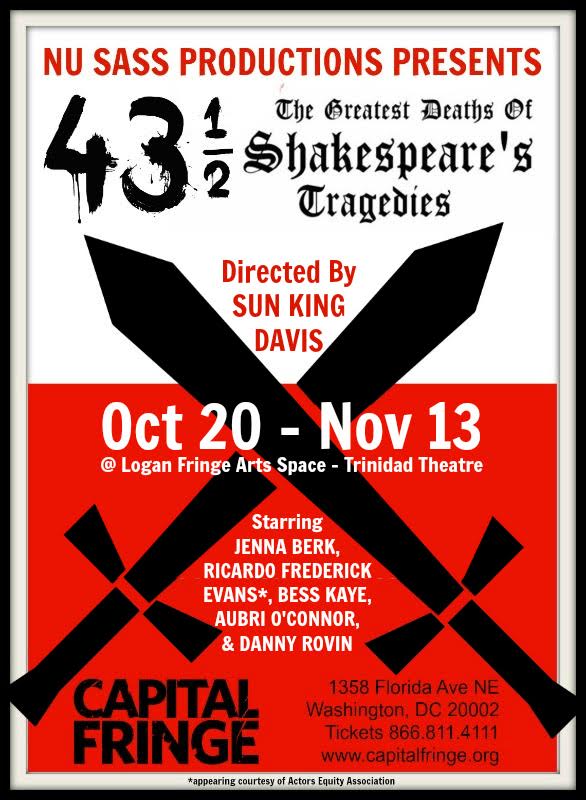