Post-Play Palaver is an occasional series of conversations between DCMetroTheaterArts writers who saw the same performance, got really into talking about it, and decided to continue their exchange in writing. That’s what happened when Senior Writers and Columnists Michael Poandl and John Stoltenberg (Magic Time!) saw the new production of Angels in America (Part Two: Perestroika), a co-production of Round House Theatre and Olney Theatre Center.

Michael: So this is the first time I’ve ever seen a play in two parts. In fact, with the exception of the new Harry Potter play (Harry Potter and the Cursed Child), which will be in two parts over two separate productions, and the various Shakespearean histories (I’m thinking the Henrys, the Richards), I can’t think of a lot of plays in contemporary theatre that follow the format. So it was a really interesting experience for me to see a “Part II” of something.

The experience was sort of like watching a TV show in the sense that you begin to feel like you have a deep relationship with the characters after seeing them time and time again. But in this case that feeling was even more heightened, because in Part I: Millennium Approaches we see nearly all the characters at their most vulnerable moments. So Part II felt very intimate. The other cool thing about a “Part II” is that all the characters we’ve been introduced to in Part I get to come together in fun and interesting ways. For example, we’ve met Belize, but we’ve never seen him with Roy Cohn. We’ve gotten to know Prior, but never seen him interact with Mrs. Pitt.

A lot of companies can only afford to produce one part of Angels. But since it’s difficult to see Part II without the groundwork laid by Part I, Millennium is usually the half that goes up. So it’s pretty special to have a co-production that does both parts in rep, and on certain days performs them back to back (stay hydrated, folks).

What was your experience of Part II: Perestroika versus Part I: Millennium Approaches?John: The magnificent Round House/Olney staging of the two parts makes for an an extraordinary experience of the whole. Having seen Part II, I now can’t imagine seeing only Part I. The progression of the characters’ lives and relationships, the advancing and deepening of Kushner’s multilevel meanings, the play’s prescient connections to today—it all invites an immersion unlike any other drama I know.

As with any formally innovative play, there’s a learning curve for the audience: a process of catching on to the unconventional syntax and vocabulary of the thing. With Angels that learning curve includes groking the fact that almost all the characters imagine/dream/hallucinate other characters, who pop in and out of scenes as if in their own reality. It doesn’t take long to get the hang of that, but for me one of the reasons I especially enjoyed following up Part I with Part II was that all these all these delightfully odd apparitions that Kushner scripted had the cumulative effect in performance of seeming quite trippy. I think that’s one explanation for why Part II engrossed me even more than did Part I. I became more at familiar with, and therefore more at home in, the fantastical and intoxicating world of the play.

By my reckoning Belize is the only ostensibly mortal character who doesn’t fabricate anyone else. Harper imagines traveling with Mr. Lies, Prior believes he see the Angel; Roy Cohn is haunted by the ghost of Ethel Rosenberg—maybe half the dramatis personae are figments of the other half. But Belize not only stays grounded in his own reality; he emerges even more clearly in Part II than in Part I as the play’s anchoring conscience on race.

Jon Hudson Odom’s performance as Belize is amazing. He nails the gravitas in the role even as he snaps and sashays. And it was actually through Odom’s performance that I found myself both sobered and moved by how much more resonant today is the theme of race in the play than when it premiered.

Angels is set in the midst of a deadly plague that is now a manageable chronic disease relatively without ill effects. Angels is set in America where legalization of gay marriage was unthinkable. The dial on gay health and well-being and gay rights has moved a lot. The dial on #BlackLivesMatter has not. For me that was the most profound political takeaway of seeing Parts I and Parts II of Angels in succession. As Part II unfolded it became clear to me that the artistic vision in the production included inviting an audience’s realization of that historical disparity. And the experience just blew me away.

Michael: Yes, yes! And I totally agree with you about Jon Hudson Odom’s performance as Belize. He is a revelation in this role. Pitch perfect, scene stealer every time. I hope he wins a Helen Hayes Award for this one. I also want to give a shout out to Tom Story, who I thought really nailed Prior. He never played his character for laughs, but he ended up getting them anyway. The comedy sprang from the authenticity.

John: After watching Odom’s and Story’s performances, I thought back to Michael Wright’s as Belize and Stephen Spinelli’s as Prior in the Broadway production—and I realized I had found Odom’s and Story’s deeper. That’s partly because as actors Odom and Story are so penetrating and protean. But it’s also because in the course of time—in the context of America’s past-tense AIDS crisis and present-tense race crisis—the very meaning of Belize and Prior as characters has deepened; therefore how we apprehend them has changed. 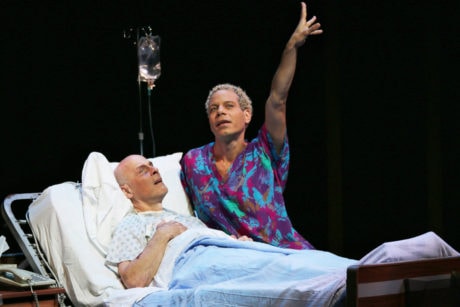 Michael: Belize seems to be the most grounded of the characters. He understands the world because he has to understand it in order to stay safe in a white supremacist world, and I think you’re right that that’s one reason why Belize sees no apparitions. It also occurred to me that in Perestroika, the characters may have so many interactions with the “spirit world” because the wall separating the two is smashed open (literally) by the Angel at the end of Part I.

The supernatural plays a huge role in Part II. And in some ways, that makes Perestroika a more challenging play. We’re not just dealing with “normal” scenes of two people talking. For instance, Act I Scene I opens with Aaleksii Antedilluvianovich Prelapsarianov, the World’s Oldest Living Bolshevik, delivering a speech to a mocked-up Communist Party Conference about the joy of having a comprehensive theory like Marxism to guide you. He says it’s “like standing atop the highest peak in the mighty Caucasus, and viewing in one all-knowing glance the mountainous, granite order of creation. You cannot imagine it. I weep for you.” Now, this monologue has actually always stuck with me, because I’m a philosophically minded person, and I’ve always had a sort of nostalgia for the grand romantic 19th and 20th century theories, Marxism especially. It’s so totalizing, so progressive and hopeful. But after a certain point, especially after perestroika (hint) and then the collapse of the USSR, it’s gotten harder and harder to justify these sweeping Modernist ideological projects. But what do we replace it with? Cynical, fragmented postmodernism? Or do we just throw in the towel and give in to “market incentives” and “American cheeseburgers” as Aaleksii says?

So, Kushner’s point is well taken, but it still begs the question of what all of this has to do with AIDS and Mormons and Roy Cohn and dealing with a bad breakup. But of course this is what’s beautiful about Kushner. He can write a play that’s large enough say smart things about every one of these issues, large and small.

John: To me Perestroika is an extraordinary example of Kushner’s breathtaking ability to keep us engaged in the raw emotional insides in the interpersonal dramas of recognizable characters—Joe’s sexual ambivalence, Harper’s emotional and sexual abandonment, Prior’s agony of affliction and betrayal, and such—while at the same time lobbing such lofty political and existential apprehensions into our cognitive capacities that we experience something literally transcendental. And by that I mean: We are invited during the dramatic action into a realm of what it means to be thoroughly human—body, soul, heart, mind—that no playwright I can think of achieves as comprehensively as does Kushner. We don’t have to track every idea, we don’t even have to follow every single character arc exactly, for this experience to immerse us. Kushner’s script just lays it out and lays it on us, the Round House/Olney production plays it out beautifully, and we are entreated to be subsumed in it however much we can or care to.

Michael: I like this idea of the play being an immersive experience. I think that’s why theatre continues to be relevant in a digital world. In fact, the more we live our lives through our laptops and mobile devices the more important it is that we continue to have an art form that by definition requires us to be present, in a particular time and place, together. I was very moved by the end of Perestroika,when Prior addresses the audience directly and brings the various narrative arcs to a close. He is not really speaking to us, though—he’s speaking to the audience that would have seen the play in San Francisco in 1991, an audience who had lost friends to the plague and was maybe sick themselves. So as much philosophy and politics and character dynamics that there is to chew on in this piece, at the end of the day this is a play that was meant to heal. And Part II in particular delivers the medicine that was so desperately needed by the community at that time.

John: Television and social media have, I fear, so unaccustomed us to being fully present as we experience live theater that we can be forgiven, I think, for approaching Angels in America without all our perceptual faculties quite primed for what Kushner has in store for us. George Bernard Shaw is the modern playwright who comes to mind as having something close to Kushner’s intelligence, political aspirations, and playwriting chops. Shaw’s stuff, though dated, still stimulates intellectually. But his characters can tend to be tendentious avatars for Shaw’s conceptual agendas. Not so with Kushner, who in Angels in America homes in on his characters’ hearts and splits them open as if with no ulterior ideational motive. And then he astounds by having them think things out loud in their stripped-naked emotional states that elevate the play to a higher plane of integrated consciousness and sweep us up into it.

That’s why seeing both parts matters. The Round House/Olney production of Tony Kushner’s Angels in America Parts One and Two comes together as a blessedly transcendent theater experience. Part One begins the great work of preparing us to enter a dimension of our full-on humanity usually inaccessible in everyday life and ordinary theatergoing. And Part Two takes us there, like a glorious unifying epiphany.

Round House Theatre and Olney Theatre Center’s Angels in America: Part 2: Perstroika plays through October 30, 2016 at Round House Theatre – 4545 East-West Highway, in Bethesda, MD. For tickets, call the box office at (240) 644-1100, or purchase them online.

Review: ‘Angels in America: Perestroika’ at Round House Theatre and Olney Theatre Center by David Friscic.

Spine: Anguish, Angels, and the Reagan Revolution: ‘Angels in America’ at Round House Theatre by Robert Michael Oliver.