Director Matt Bassett, a faculty member of Montgomery College, in choosing Bat Boy: The Musical to direct, chose to examine, “how someone who doesn’t fit the social norm must struggle for recognition and acceptance, against others’ (and their own) baser natures.” That sentiment aptly fits the central figure of Bat Boy: The Musical, which features a Book by Keythe Farley and Brian Flemming, and Music and Lyrics by Laurence O’Keefe. With Music Direction by Dr. Jay Crowder and Victor Simonson (who was also the Conductor), Montgomery College’s production of Bat Boy: The Musical an offbeat combination of tragicomedy and fun.

The story, based on a news item in the ‘Weekly World News,” is this: an odd creature is found in a cave in Hope Falls, West Virginia. The Parker family adopts the titular bat-boy and incurs the anger of the Hope Falls community. In the end, the Parkers wind up facing many painful truths about themselves. The show is a musical\comedy with horror elements.

The show opened with Rick, Ron, and Ruthie, played by Danie Rodriguez, Maddie Valikhovskaya, and Julieta Gozalo-Michaud, rappelling (for real) from the ceiling into Bat Boy’s cave. The cornered, put upon Bat Boy, bit Ruthie (sending her to the hospital) and Rick and Ron captured him. David Singleton, the titular Bat Boy, outstandingly played virtually every emotion an actor can perform. He delivers a tour de force performance.

Rick and Shelly’s funky, hip-hop fused, “Whatcha Wanna Do?” led to Shoop’s memorable solo in “A Home for You.” The Company’s “Another Dead Cow” featured impressive dance moves along with their vocals. “Dance With Me, Darling” by Doctor Parker (James Ward) highlighted Parker’s loveless marriage to his wife Meredith.

“Mrs. Taylor’s Lullaby” featured smooth vocals by Francisco Borja. “Show You a Thing or Two,” by Meredith, Shelly, Bat Boy, Doctor Parker, and the Company made way for Singleton’s mesmerizing solo in the reprise of “A Home for You.” The Company wrapped up Act One with the unforgettable “Comfort and Joy.”

Shelly’s father, the villainous veterinarian Doctor Parker, found himself struggling with the conflict of protecting Bat Boy from the narrow-minded townspeople and his own secret hatred of Bat Boy. It was Doctor Parker who caused the most havoc in the lives of everyone involved. Borja’s Mrs. Taylor was hilarious as the hateful mother of the hospitalized Ruthie.

Da’von Moody, who played Reverend Hightower, the God-like Pan, and Institute Man, commanded every scene he was in, including the one in which his Reverend Hightower led a revival and sang “A Joyful Noise,” with the support of the Company (which he later reprised).

David Singleton slayed his solo “Let Me Walk Among You,” and as the town’s distrust and hatred of him reached a high pitch, the Company belted “All Hell Breaks Loose” and “Stop the Bat Boy!” Inevitably, Love conquers all,  with “Three Bedroom House.”

One of the most unforgettable highlights of the show was Hightower’s performance as the bare-chested, goat-pants-wearing Pan, a sort of forest demi-god. Hightower was beyond impressive in the number “Children, Children,” sung with support by the Company, many of which were costumed as various animals. It was that scene that was the catalyst for unlocking the Parker’s many secrets.

Singleton and Salah’s love duet, “Inside Your Heart” led to two more excellent solos by Singleton, “Is All That You Taught Me a Lie?” and the creepy but good “Apology to a Cow” (Bat Boy Loved Blood). The show featured three finales: “I Imagine You’re Upset,” “I Am Not a Boy,” and “Hold Me, Bat Boy,” which highlighted the excellent singing of Singleton,  Michelle Salah, and the Company. 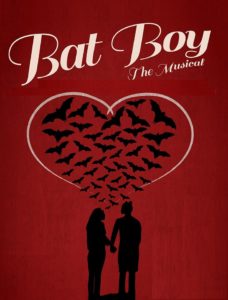 Running Time: Two hours and 15 minutes, with a 10-minute intermission.