The Logan Fringe Arts Space, now offering year-round programming, has launched a new annual series. Julianne Brienza, CEO/Founder of Capital Fringe, has a vision for experiment and the courage to make the process, no matter how rough, a learning tool for future editions.

Fringe POP (Performance over Projection) in its inaugural season juxtaposes 10 minute plays and short films. This year’s series is dedicated to the fine line that divides private from public. Through an alternate presentation of film, curated by Jon Gann, and live action 10-minute plays, the Private Track offers intimate, fragile moments of relationship, fleeting emotions, solid humor, unwieldy and awkward situations and plenty of plucky nerve. 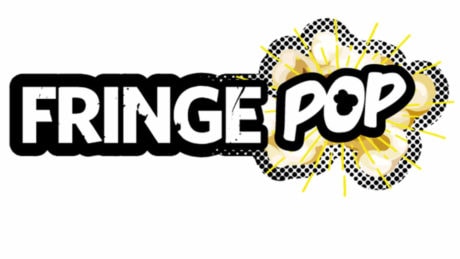 A couple negotiates contract versus commitment in the 10 minute play Good as I Been to You by Anthony SzulcRudy, played by Jordan Friend, has remained in the USA for the past three years because of a contract marriage. Intended close-up moments via a real-time feed designed by Robin Bell didn’t materialize, other than the presence of the cameraman Adrian Parsons. Off to the side with ambient sound absent, video from the H Street restaurant, Dangerously Delicious Pies provided a sense of place, but divided the attention.

The Garden That You’ve Planted, a short film by Kathleen Mann revealed a break-up but recalled a rare moment of happiness.

Returning to the modest restaurant motif established earlier, Surprise – a ten minute play by Mark Harvey Levine finds the same actors, Jordan Friend, Ruthie Rado, and Tiffany Byrd, in a similar set-up: man, woman, waitress. Jordan Friend as Peter can see well into the future. His psychic abilities have prevented his partner from finishing a sentence, though her roar can’t be contained.

Mr. Chavan – a short film by Eddie Shieh, sets up a conversation through the everyday sounds of public transportation, portable oxygen machine, and paper shredder, rather than words, as a home-bound older man and his caretaker communicate through the simple gesture of a cut flower.

The Bench Project: Heavy Metal – a film by J.X. Carrera, carefully frames a weightlifting bench, a man dedicated to the art of fitness, and an ill-timed over-reaction. A work-out is interrupted by a phone call. A discussion about an untoward comment on social media ensues, leading to an escalating fit of temper and finally a solid decision. During the exertion of an excruciating set of free weights, there is a moment of re-consideration, and then a re-dial with a quick about face.

Cynthia Faith Arsenault’s 10-minute play – Fully Present – places the expansive and engaging actor Alanie Kravitz in a one way conversation with an unseen blind date partner. Accompanied and fulfilled more by her cell phone than the possibilities of a new friendship, her texts, and in this instance the real-time video feed allows a glimpse over her shoulder, making clear the difference between words and private thought. The video feed panning over audience members detracts, adding little to the “fly on the wall” experience of second-hand observation.

A short film by Venetia Taylor – Venice – is a Skype conversation between a spoiled, over-indulged son luxuriating in a hotel room in Venice and his mother in Sydney. The humor is set up through mispronunciations, generational assumptions and the well placed appearance of a chamber maid who further reacts to the situation between mother and son.

Our Place – a ten-minute play by Mark Scharf – features moving and emotionally resonant performances by Cam Magee and Nick Torres. A long time couple, he afflicted with a disease of memory, has returned to a much loved restaurant, searching for a trigger that will fuel recall, perhaps pushing back, even for a few moments, the progression of time and change.

Fringe POP is a good addition to the independent arts community. Though the direct interaction between video and live action did not always emerge, the attempt to go beyond an expected format is to be applauded.  There is the opportunity to consider the screen versus live action, and why the close at hand, living-breathing situation may seem more distant than the flat two dimensional views that frame and isolate perception.