When the cast of St. Mark‘s Players’ new production, Peter and the Starcatcher, charges out from behind deep red curtains for their opening scene, that is your cue. Stop right here and suspend your disbelief. Let these talented actors lead you through the next hours of broad music hall farce, merriment, anguish, and mayhem. You’ll be glad you did!

Peter and the Starcatcher answers the century-old questions of how Peter Pan and the lost boys took up residence in Neverland, and how Pan began his grudge match with a certain nefarious pirate. This imaginative backstory, which is based on the 2006 novel by Dave Barry and Ridley Pearson, enjoyed a successful New York run both on and off Broadway from 2011-2014. Now, the venerable St. Mark’s troupe tackles the production with gusto. 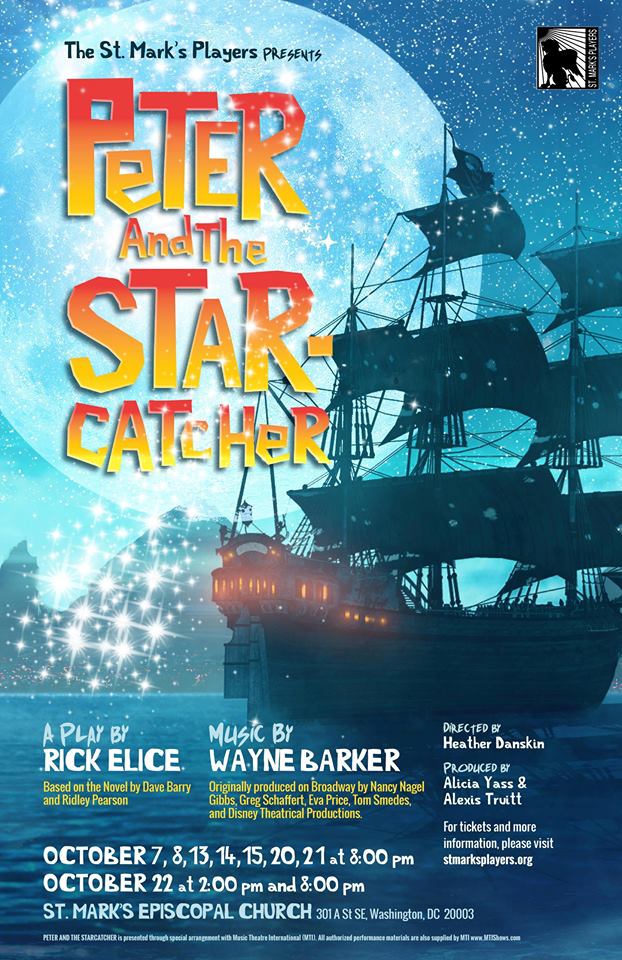 Our tale begins as Lord Aster, a British aristocrat, and his precocious 13-year-old daughter, Molly, embark on a dangerous mission demanded by Queen Victoria. On separate ships, they sail to the tropical island of Rundoon to deposit a trunkful of stardust in the fiery crater of a volcano. It seems that stardust is pretty potent, and in the wrong hands, it can do some major damage to the Empire. Only specially trained ‘starcatchers’ can handle the stuff safely.

Soon enough, the captains of both ships are revealed to be oppressive scoundrels who try to get their hands on the trunk they think contains the Queen’s treasure. Bill Slank, commander of the Neverland, is carrying three orphans – our hero Peter among them — who he plans to deliver to Rundoon’s fearsome leader, Fighting Prawn. Black Stache, so named for the huge black mustache painted on his face, ties up the master of the Wasp and takes command, proclaiming himself the proud heir of British piracy. As they chase each other across wild seas and onto lush tropical islands, the captains, their passengers and crews vie to outwit and each other in a series of often hilarious, sometimes silly, and always entertaining maneuvers.

This story is staged with minimal props. Margaret Chapman, their creator, provides us with two small paper boats, a fishing reel, a stuffed cat, two old trunks, and little else. But under the direction of Heather Danskin, these simple objects ignite our imagination. She writes that she “chose to stage Peter and the Starcatcher as if it were in a cluttered attic, with ….just the kind of resources a kid would see as a wealth of possibilities.”

St. Mark’s amazing costumes, designed by Rose Lane, Ceci Albert, and Lisa Brownsword, also help carry the story. As many of the players have more than one role, lightning fast changes are the norm. So, a bandana, a quirky hat, or other small effects, signal their shifts of identity. But when they get to Rundoon – watch out for elaborate, sidesplitting ensembles comprised of surf and turf!

Music Director Sam Stenecker treats us to piano accompaniment throughout that is by turns lively and poignant, underscoring both plot’s the swashbuckling fantasy and its delicacy.

Of course it is the actors who ultimately make us believe, and care. St. Mark’s Players form a terrific ensemble, physically transforming themselves minute by minute from storm-tossed adventurers to ship-wrecked survivors, to native islanders. They also excel at the play’s verbal gymnastics, with its quick witty asides laced with wry 21st century references. This is especially challenging with St. Mark’s difficult acoustics, which can muddle quick lines and songs. I hope that these sound issues can be resolved quickly.

Terrific individual performances further distinguish the performance. Katie Ganem as Molly Aster projects prissy self-confidence combined with empathy and steadfast loyalty. Ryan Mays is touching as the gawky, defensive orphan so neglected by adults that he does not even have a name. With Molly’s dogged support, he emerges confidently as our hero Peter.

Andrew Quilpa’s Black Stache delights the audience with his funky movement and broad, hammy humor. His side-kick, Smee, is played with half-crazed glee by Amanda Quain. While she rarely puts down her daggers, Smee’s beautifully timed corrections of her boss’ near-constant malaprops add even more wicked humor to the mix.

These players are amply supported by many others, including Mario Font as the alliterative Mrs. Bumbrake, Alex Reeves’ nasty Bill Slank, and Gavin King as the eternally hungry lost boy, Ted. Do not miss his tug of war with what looks to be a pineapple.

With all of its clever humor, from low-brow to high-brow, we never forget that Peter and the Starcatcher is also a tender tale of boyhood fantasies, heroism and aching choices. Ultimately, we take great comfort in knowing that many of the characters we are introduced to in this delightful prequel return to enchant us in the timeless Peter Pan.