The Victorian Lyric Opera Company (VLOC) presented a semi-staged concert version of the 1843 opera, The Bohemian Girl. The opera has music by Michael William Balfe and a libretto by Alfred Bunn.

The opera’s story line, extremely briefly, is: Boy (Thaddeus, a proscribed Pole) meets royal girl (Arline). They need to run away to join the gypsies where they lead a wonderful life, fall in love and plan to be married. Before the wedding, Arline expresses a faint memory of leading a life of riches and royalty. Both Thaddeus and Arline are captured by the royal family due to recognition of a planted jewel which was previously stolen. Eventually, it is discovered that Thaddeus is Polish royalty in hiding and Arline’s father (Count Arnheim) blesses their union.

Both the 30-member chorus and 34-piece orchestra performed with finesse under the excellent direction of Joseph Sorge. One stunning moment was a clarinet solo by Laura Bornhoeft at the beginning of the second act. 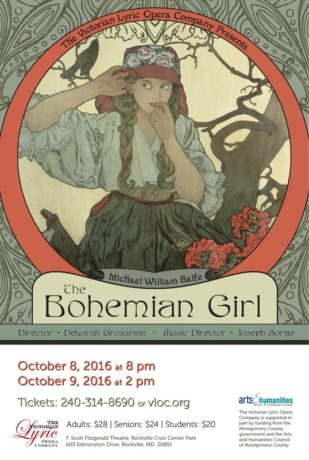 Unfortunately, at times, the singers struggled to be heard over the large orchestra and chorus. Both veterans Alexandra Friendly (Arline) and Bennett Umhau (Devilshoof, King of the Gypsies) were an exception. Friendly’s soprano cut like a knife and Umhau’s baritone rolled like thunder.

Tenor Rihbabh Bajekal’s (Thaddeus) arias with Friendly were exceptional. Bajekal was outstanding in another way; he appeared to be the only of the seven featured singers who had memorized his role, infrequently referencing his score. This allowed Bajekal to act and display the emotion that often crackles through the opera.

Stephen Stokes (Count Arnheim) had a smaller role and did I enjoy when he sang with Friendly and Bajekal. Denise Young (Queen of the Gypsies, who also provided the colorful costumes), Gary Sullivan (Captain of the Guard), and David Merrill (Florestein, nephew of the Count) delivered wonderful performances.

Friendly’s clear soprano brightened the opera during the second act. Her first aria “I dreamt that I dwelt in marble halls” expressed both her feelings and the uncertainties she has surrounding a glimmer of memories of living an elegant life. As she sang to Bajekal (Thaddeus), one could see the battle between staying silent and the necessity to tell all to her betrothed. This aria has been recorded numerous times by artists in many genres. In the following aria, “The wound upon thine arm,” Thaddeus explains how he came to be her protector twelve years ago. The interplay of Friendly and Bajekal’s voices was breathtaking. Her voice supported his and their runs were heartfelt rather than showy.

In Act III, the voices of  the lovers, and her father, and the count, have many opportunities to weep and celebrate together. At the outset, all seems lost and Friendly (Arline) and Bajekal (Thaddeus) are in despair as expressed in “Then you’ll remember me.” Fortunately for all, Thaddeus is able to show his Polish Royalty and he, Arline, and the Count show their mutual joy in “Let not the heart.” Marking the happy ending we all seek, this aria practically beamed sunshine.

VLOC’s Board, Director Deborah Grossman, and Music Director and Conductor Joseph Sorge all deserve thanks for introducing The Bohemian Girl to local opera lovers. Given the amount of work that clearly went into the production, it is a shame that there were only two performances. Hopefully, a fully-staged production is in VLOC’s future.