The thundering Niagara Falls serves as a perfect backdrop for this absurdist romantic comedy. It is a symbolic reminder of love, death and the capriciousness of nature/life. The eccentric cast of characters seems right at home amongst the crashing sounds of one of the wonders of the earth which is both a honeymoon haven and a magnet for thrill seekers and suicidal souls.

Cass (Noa Bass) is leaving her husband Kip (Caleb Uzcategui) after a decade of marriage. He is distraught as he catches her packing to go. She runs off to Niagara Falls, a place where she feels she will find out where things went wrong in her life and to find adventure. Cass has a long written list of experiences she feels she has missed.  On her adventure she meets the most bizarre group of people starting with Lois (Megan Lomax), the suicidal alcoholic whose own marriage has just ended.

At Niagara the two now sidekicks meet Captain Mike (Warren Harris), a normal man in a world that is nothing more than unrelated but absurd occurrences. Cass and Lois are being followed by the funniest private detectives, Karla (Chania Hudson) and Glen (Will Mekelburg), a long-married couple who play and integral part to the plot of the show. All of them encounter the strangest group of women all played by Rachel Mackall that include a hotel guest, helicopter pilot, waitresses, and marriage counselor you can imagine.

Just when you think things can’t get odder, they do. I found myself laughing at topics like suicide, murder, destroyed marriages, alcoholism and death, and judging by the audience reaction- they laughed just as loud.

Noa Bass is wonderful and the maniac Cass. She never loses her energy as Cass unleashes a tirade of thoughts in her dialogue. Bass captures the innocence of the young wife now facing a world she no longer understands, and she looks for arrows in her life to point her in the right direction. She also has great comic timing and is a great source of humor throughout the show.

Bass’ performance is matched by Megan Lomax as Lois. Despite all her faults Lois is one of the best sidekicks since Gabby Hayes. She also provides some of the biggest laughs in the show as she drinks herself into constant oblivion and prepares for her final curtain. 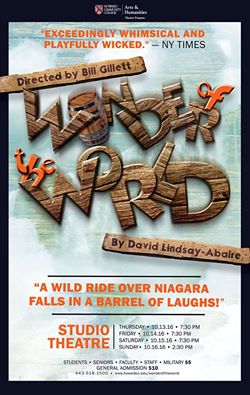 Caleb Uzcategui is another bright star in this parallel universe as the now -estranged husband, Kip. Kip is both likeable and deviate at the same time. Uzcategui captures both ends, keeping him likeable, pathetic, and despicable all at the same time.

Chania Hudson and Will Mekelburg as the gumshoe wife and husband reminded me of Abbott and Costello, probably the best at playing bumbling common folks. Karla has a sharper tongue than her mate, but Glen’s innocence is the root of some of the wildest and funniest scenes. Their best moment, among many excellent ones, comes when they are searching the hotel room of the two new friends looking for identification, where they encounter Lois. It’s a hilarious scene.

Rachel Mackall steals the show playing several smaller roles  Her waitresses steal every scene they appear, and her marriage counselor, Jamie, is one of the funniest and most absurdist characters I have ever come across. Mackall is a a terrific comedienne.

All of the cast members are student actors, and I was so impressed by their performances and talent, and Bill Gillett’s excellent direction, especially during the actors’ ‘solos.’

The design of the show is so impressive, created by veteran local designers. Robert Croghan’s costumes, especially the marriage counselor’s attire, are practical and imaginative. Paige Hathaway’s set depicts the roughness, simplicity, and beauty of The Falls. She uses multi-levels to give the director a place to stage the simultaneous action and the scenes at the waterfall. Her furniture pieces on wheels allow actors and crew to move things quickly and help keep the pace fast and lively.

Kristin A. Thompson beautiful lighting design brings the Falls illuminated the beauty and wonder of the Falls. There is a stunning scene including two helicopters that you won’t soon forget. Helping to create the thundering wonder is Sound Designer Seth Schwartz. His dramatic sounds of the waterfall let us know this is an eerie place to visit. Special kudos go to Alison Anderson (Stage Manager/Props Designer). Scene changes were effortless, and the props were quite effective.

Sadly, Wonder of the World only plays through this Sunday. So, I highly recommend that you dive into HCC’s Studio Theatre for a barrel of laughs.

Running Time: Two hours and 10 minutes, with an intermission.

Wonder of the World plays through Sunday, October 16, 2016, at Howard Community College’s Studio Theatre – 10901 Little Patuxent Parkway, in Columbia, MD. For tickets, purchase them at the door, or online.