One of the opening lines to last evening’s performance of Sherlock Holmes: The Final Adventure, uttered by the world’s most famous detective, was “You see, but you do not observe.” Audiences who observe this expertly crafted thriller at the Old Opera House will not be disappointed.

Sherlock Holmes: The Final Adventure written by Steven Dietz and based on the original 1899 play by William Gillette and Sir Arthur Conan Doyle, is imaginatively directed by Laura Richards Bakin. It depicts the famous detective taking on one last case just as he is about to retire. The King of Bohemia is being blackmailed, and the world famous opera singer Irene Adler is mixed up in the heart of the crime. Joined by his faithful companion, Watson, Sherlock Holmes sets out to solve one last mystery which leads him straight into danger at the hands of his arch enemy and Holmes must use his world famous wit to solve the case before time runs out!

As the titular character, Bill Taylor expertly carries the show. Taylor brings a wonderful combination of charisma and confidence to the famous detective and expertly spits out loads of highly intricate and technical dialogue.

Carl Dunn adds greatly to the dream team as Doctor Watson. Dunn has the dual dramatic role of playing both the narrator of the mystery story and the famous detective’s sidekick. Dunn is a master at subtle comedic timing and had a wonderful chemistry with Taylor.

As operatic diva Irene Adler, Kit McGinnis gives an incredibly strong and seductive performance. Her impressive combination of both the damsel in distress and the femme fatale showed off a tremendous stage presence.

Tim Seltzer is exceptional as the villain and Holmes’ arch-enemy, Professor Moriarty. Seltzer was both sophisticated and menacing as the criminal mastermind who keeps eluding capture by Holmes and the law. Some of his more threatening moments when he exploded and instantly switched back to an icy calm demeanor – were slightly terrifying.

Charles Boyce is impressively regal and humorously stuffy as the proper King of Bohemia. Ed Conn was both genteel and later precociously annoying as James Larabee,  displaying a fantastic character transition. Likewise, Amy Hebb gave a fine performance as Madge Larabee, and some of her facial expressions were priceless.

Out of the full cast of creative mystery characters, Micheal George unabashedly steals the show as low-life criminal Sid Price. George is hysterical as the comedic relief and his character voice was exceptional.

John-Michael Rolnick as Clergyman/Policeman/Ensemble, Martha Louden as Young Swiss/Ensemble and Lydia Dunn as Post Mistress/Ensemble bring to life some very varied London characters to help the atmosphere and intrigue of the mystery.

The set, designed by Scott Tatina, features a stationary London city skyline and fluidly moving minimal set pieces to suggest the constantly changing locations in the story, such as Holmes’ office or a parlor. Costumes, designed by Jen George, are period appropriate dapper suits and richly decorated dresses which still allow for all of the constant physical activity in the story.

Perhaps the best technical element of the production is lighting by Will Heyser-Paone. Many scenes have specific characters playing almost “phantom” roles, only appearing onstage to read aloud letters or arriving early onstage when they are referenced by other characters. The lighting does a terrific job with the delicate act of featuring certain characters in dim or different colored light when necessary, so as not to draw attention away from the main action.

The fight choreography in the show was also very intricate and extremely realistic. The suspenseful underscoring music played during the pre-show and intermission also added a nice touch to the evening.

For a cleverly well-crafted evening of suspense, filled with exceptional performances, it is “elementary” not to miss Sherlock Holmes: The Final Adventure at the Old Opera House. 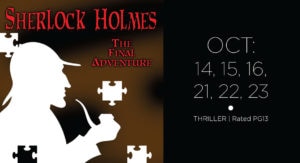