Fells Point Corner Theatre (“FPCT”) opened its production of Matthew Lopez’s The Whipping Man on Friday. The second show of FPCT’s “Rescue Me” season, The Whipping Man is a smart, poignant, and surprisingly funny play. It focuses on weighty issues like religion, slavery, family and accountability, but does so with care for the audience. It is neither a sermon against nor a celebration of the real-world situations it presents. It’s about human beings in dramatic and uncertain post-Civil War America. It is well-written, well-performed, and well worth two hours of your time.

The Whipping Man begins with an injured Confederate officer, Caleb DeLeon – an affluent Jewish man from Richmond – returning to his home at the end of the Civil War. His house is in ruins from the years of war and the desperate circumstances war visits both on its soldiers and on those left behind. The only people left at the house are two of Caleb’s newly-freed slaves, Simon and John. It’s Passover, and the three men share a makeshift Seder as they tend not only to Caleb’s wounds, but also the wounds inflicted on them all from living in a world where men can own other men.

Michael Joseph Donlan plays Caleb, the Confederate Army officer and former slave-owner. During the course of the play, Caleb experiences a wide variety of emotions. He cycles between being out of his head with panic to being petulant and commanding to suffering agonizing physical and emotional pain. Donlan adeptly navigates through all these volatile emotions and actions. He shows impressive physical skills, convincingly displaying the various consequences of his character’s severe leg injury. And his monologue in Act 2 is riveting.

Played by Percy Thomas, the aging former slave Simon is the heart of the play. He’s known Caleb and John since they were boys and has an almost paternal authority over them both. Thomas’ portrayal of Simon is beautifully nuanced; subtle changes in his facial expression and body language speak volumes. This is particularly visible in how Thomas expresses Simon’s genuine affection for Caleb – an affection tinged with the indignity of having helped raise a boy who would come to “own” him. Thomas’ performance altogether is exceptional.

Ian Smith plays John, a complex character who loves books and knows the Torah by heart, but also delights in stealing from abandoned estates and holds immense anger toward those who have oppressed him. Yet, he is also the source of most of the much-needed comic relief in this show that deals with so many of the challenging aspects of the human condition. Smith is undaunted by those complexities, giving a strong performance. Like Donlan, Smith has a powerful monologue in this play. He performs it with such passion and skill that it literally resulted in tears in some audience members.

The play was directed by Barry Feinstein, a Baltimore theater institution for 30+ years, who elicited outstanding performances from his cast. Bush Greenbeck’s scenic design is period-appropriate and spare, in complete accord with the setting of a once-great estate that has largely been plundered. Lighting Designer Charles Danforth III and Sound Designer Harry Bechkes provide the balance of the atmosphere for this often tense and emotional play. Notable are the thunderstorms that occur, marrying set and sound and light to create a realistic visual and auditory experience.

The actors, while excellent in their character development and acting, struggled with their lines in places; understandable, as this play is very dense with words. Professionals, the actors recovered and got on track easily, but it was a bit rougher than would have been ideal. I am confident that the performances will grow as the run progresses so when you go see it – and you should go and see it – they should be spot-on. 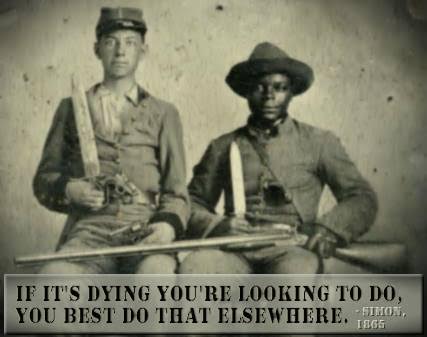 Director Barry Feinstein has said, “We believe the purpose of theater is to inspire an audience to think and discuss the subject matter presented on stage.” Fells Point Corner Theatre fulfills this purpose admirably with The Whipping Man.

Continuing this season’s “Rescue Me” theme, The Whipping Man is profoundly moving theater, presented by three accomplished actors and a talented creative team. Go see this play with friends; you’re going to want to talk about it with someone after the curtain falls.

The Whipping Man plays through October 30, 2016 at Fells Point Corner Theatre – 251 South Ann Street, in Baltimore, MD. For tickets, purchase them at the door or online.