On Friday, I got to do two things I’ve been wanting to do for a while: catch a show at Arena Players and see the play Radio Golf. I’m happy to have had the opportunity to do both. It was a particular pleasure to see the last play written by two-time Pulitzer Prize-winning August Wilson – arguably the greatest African-American playwright – in an historic African-American playhouse. 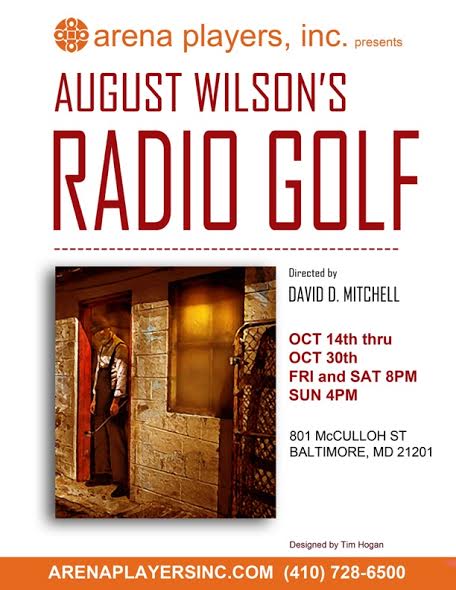 “a service organization to the good of the community, its cultural growth, and well being… [providing] the community with a physical facility wherein all who are interested may avail themselves of the opportunity to participate in the theater arts.”

Arena Players’ current production, Radio Golf, directed by David D. Mitchell, is the last play in August Wilson’s famous “Pittsburgh Cycle,” a series of 10 plays – each set in a different decade – that chronicles aspects of the black experience in America. Radio Golf was set in the 1990s. It covers many still-relevant themes, such as ambition, honor, identity, and racism.

DCarter plays the central character in Radio Golf, Harmond Wilks. Harmond is an Ivy-League educated owner of a real estate agency he inherited from his father. He is running to be the first black Mayor of Pittsburgh. Harmond, his wife Mame (Ama Brown), and his best friend/business partner Roosevelt Hicks (Joshua Dixon) are working together on a redevelopment plan for the depressed Pittsburgh neighborhood where Harmond was raised. Conflicts arise when a couple of men from the neighborhood, Elder Joseph Barlow (Mitchell Ferguson) and Sterling Johnson (Martique Smith), challenge the destruction of an old house in the redevelopment zone.

Carter does a good job presenting Harmond as an ambitious, yet principled candidate for office. He displays, both through his body language and Wilson’s metaphor-rich dialogue, the personal growth of his character over the course of the play. While Carter struggled with some of his lines – an issue I believe he’ll work out as the run progresses – his delivery of the Act 2 monologue about mistaking progress in the fight for equal rights as the achievement of equal rights is excellent. Carter also shines in the scene in which Harmond rails against the injustice of a police officer who killed an innocent man getting a promotion and a bonus, an issue that is sadly familiar to this day.

Joshua Dixon, as bank Vice President (and Harmond BFF) Roosevelt Hicks, provides a great deal of levity to the show. A high-energy, physical actor, Dixon’s big gestures and bold movement choices match his character’s grand plans for his future. Almost giddy with excitement as he achieves level after level of material success, Dixon’s Roosevelt struts and preens with an intensity consistent with the runaway train the banking and real estate industries were in the 1990s.

Ama Brown adeptly plays Harmond’s wife, Mame Wilks, a strong, successful woman who wants to support her husband and is willing to play “the game” to get him elected to office. Brown does a great job of expressing Mame’s meticulous, politically-savvy nature. Brown’s Mame is a professional. She dresses sharply, speaks purposefully, and carries herself with straight posture and efficient steps. Brown uses warm gestures and a subtle softening of her affect to show affection for Harmond, even when she finds him frustrating and stubborn.

Mitchell Ferguson, as the eccentric Elder Joseph Barlow, is a bit of a scene-stealer. He plays Old Joe full tilt, sometimes stammering and confused, other times willful and persistent. It looks like Ferguson had fun in this role, indulging his character’s idiosyncrasies and age-earned audacity.

My favorite performance of the evening was Martique Smith’s portrayal of Sterling Johnson. He doesn’t enjoy quite as much stage time as most of the other actors, but his portrayal of Sterling was well-developed and solid. Smith has excellent stage presence; I’ll be keeping an eye out for other productions where he’s involved.

August Wilson’s final play, Radio Golf, may not be as well-known as Fences or his other work, but it is no less compelling. It touches on many of the same issues as his other plays – family, honor, identity – and asks what is success and is it worth the price if it means forsaking your history to comply with the dominant culture’s identity.

Arena Players is a community theater with heart and they clearly put a lot of it into this show. Their production of Radio Golf is definitely worth seeing.

Running Time: Two and a half hours, plus an intermission.

Radio Golf plays through October 30, 2016 at Arena Players – 801 McCulloh Street, in Baltimore, MD. For tickets, buy them at the door or online.