Billed as “The Second City’s Completely Unbiased Political Revue,” Unelectable You—now in the middle of a four month pre-election national tour—paused in Washington, DC last weekend for a stop at The Kennedy Center’s Eisenhower Theater. 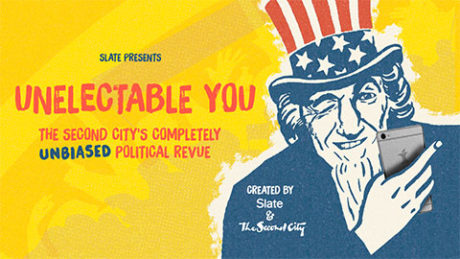 More than a thousand people—mostly Hillary supporters—filled the orchestra and both balconies for a two-night stand in which improv morphed into full-blown comedy and spectators turned into performers.

Carisa Barreca, for example, played both Melania Trump and Hillary Clinton—Melania with a sultry pout and an East European accent, Hillary with a smile so wide and fixed that it looked like it was painted on—while Frank Caeti was hilarious as Donald and Bill.

Demonstrating equal satire for all, Alan Linic did a brilliant turn as Bernie Sanders. Finding himself trapped in a limbo of failed candidates—not just Marco and Ted but Harold Stassen and Gary Hart—Bernie lamented his fate in an unmistakable Brooklyn-Jewish accent.

President Obama himself —who generated wild cheers from the audience when he pondered a third term—was played by Ian Owens. Owens also played the lone African-American Republican who wears a bow tie to prove it.

Tien Tran played a variety of roles, ranging from Sarah Palin to a dick-toting woman candidate, while Cody Dove was the ultimate Comedy Central host, masterminding all the action.

Many of the skits began with improv, using audience participation and ideas to glide into a gleefully comic, but carefully scripted and well-reheased scene.

For example, on the night that I attended, one of the unexpected stars of the show was a young man named Lionel, who was literally plucked from the audience—where he happened to be sitting in the first row—and was plunged into the role of reluctant hero, primed to defeat both Clinton and Trump. It was one of the best skits of the show.

In fact, Lionel—who resembled a cross between early Woody Allen and vintage Charlie Chaplin—was  so good in the role that I was convinced, at first, that he was part of the cast. In retrospect, however, I suspect it was the genius of the Second City troupe that guided him from bemused onlooker into plucky comedian, half-buried under an enormous top hat. (Of course, he could have been an out-of-work actor, hoping to be discovered, which is something that actually happened in one of the other cities on the tour!)

The real cast was backed up by a team of terrific writers, designers and techies, led by Matt Hovde, a director whose name is virtually synonymous with improv.

Under Hovde’s tight direction, many of the skits were seamless, combining razor-sharp wit with multi-media visuals so funny that the audience was often convulsed with laughter.

Imagine pornographic graphics—in this case, a series of putative logos for the Trump-Pence campaign—in which one letter of the alphabet (the ‘T’ of course) keeps screwing the other.

The images, projected onto a melange of giant screens, are vastly entertaining. Mike Tutaj designed the projections, working with Technical Director Keith Kolasinski.

Music plays a similar role. Ayaka Kinugawa—who is a very talented composer and pianist—gleefully wields the keyboard in a manner reminiscent of the piano players in the days of silent movies.

Jesse Case is in charge of overall sound design, which included some wonderful singing. (A blues parody, belted out by the two women, was a vocal highlight of the show.)

Heather Gilbert does a fine job with the lighting, which is perfectly coordinated with the action, onstage and off. The lights go up when the actors are spread out in the audience and go dark when the jokes turn abruptly bleak.

William Boles has designed a seemingly minimal set—a bare stage with chairs, carried on and off—and Stage Manager Phillip James Randall, makes sure that everyone, with or without chairs, keeps moving.

The costumes, designed by Raquel Adorno, are mostly minimal too—all the men wear shirts and ties, plus jackets as appropriate—but the women are something else. Barreca, the lusty blond, can’t help but stand out in a skin-tight red dress, while Tran, the angry feminist, saunters about like an old-fashioned vaudeville comedian, wearing trousers held up by suspenders.

Much of the credit for this production goes to the writers, who have created—and refined—some  remarkable comedy skits. The principal writer is Steve Waltien, while Dan Kois, who is the culture editor for Slate Magazine, is a creative consultant.

Unelectable You is a collaboration between Slate—now celebrating its 20 anniversary as a leader in online journalism—and Second City, which has grown—since its modest beginnings in a cabaret in Chicago in 1959—into a virtual empire of comedic enterprises. However, the collaboration does not always feel natural. The interviews with Slate writers—one tucked into each act—had the feeling of commercial breaks, touting the fact that Slate is actually the sponsor of the tour. Nor were all the improv bits equally successful. Some of them—especially at the beginning of the show—reminded me of exercises in an acting class.

Unelectable You is part of a national tour. For those of us who find the current state of politics depressing, this revue brings a bright spot to the otherwise shadowy corners of a presidential race gone amuck.