Anglo-Irish Playwright Oliver Goldsmith’s “laughing comedy”- She Stoops to Conquer- was first performed in London in 1773. It’s been a favorite for study in English literature, and theatre classes have studied it ever since. It’s a rare example of 18th century plays to have endured, and it is still regularly performed today. But not often, perhaps because it’s very difficult to do, particularly with an American cast, for it is British to the core. It was called a “laughing comedy” in its day because it split from the then-popular “romantic comedies,” and was a surprise hit when it arrived. Originally called Mistakes of a Night, for its complicated plot unravels in the course of just one night.

TACT-The Actors Company Theatre (the off/Broadway company of actors) has mounted an adaptation by the Artistic Director Scott Alan Evans, and it is currently playing at the Clurman Theatre on West 42nd Street, a small but comfortable house in the cluster of theatres there called Theatre Row.

Working from the outside in, Brett Banakis’ set design is virtually non-existent. Tracy Christensen’s costumes are barely indicated by having the ladies wear a period hat and perhaps an 18th century jacket, over a short skirt or a kitchen apron. The gents have the odd tri-cornered hat, knickers with stockings rolled up on their bottoms; a cloak here, a satin vest there. The stage is bare but for the occasional armchair, side chair, desk and table. When needed in “the bottom of the garden” a few pine trees and a bush are wheeled into the drawing room, the lights are lowered, (it’s darkest night) and a bluish light is spotted on those who are speaking. Nothing wrong with minimalism, but as there are no walls, the company must lounge around against the side walls of the stage when waiting in what would be the wings if there were wings. They enter and exit through the audience, nodding agreeably to us as they pass.

I’ve seen several of the resident company in fine productions of The Late Christopher Bean, Lost In Yonkers, Three Men on a Horse, and a few have been well-placed here.

But I found little consistency in style with the playing. John Rothman does a good job as Mr. Hardcastle, and Cynthia Darlow is having fun as his wife who is second cousin to the Aunt Pittypat (as played by Laura Hope Crews) in Gone with the Wind, though she races through the lovely language to the point where much of it is lost on my American ears. Tony Roach (as Hastings) and Jeremy Beck (as Marlow), are attractive and look comfortable in their semi-period clothes. Mr. Beck is amusing when facing the woman who hopes to marry him, for he freaks out when in the presence of a self-respecting upper class lady. When she decides to stoop to conquer him, by pretending to be a barmaid, he is again a dashing leading man with a touch of Donald Trump’s sense of entitlement when it comes to the lady’s favors.

Mairin Lee is a lovely Kate Hardcastle, the lady of the play’s title, and Justine Salata is pert and lively as Constance Neville, who lives with the Hardcastles, though all of them have been directed to race through the material as though we might grow restless if they took a breath. As a result we miss much of the nuance in the writing, and certainly most of its imagery, for Mr. Goldsmith certainly had a way with words.

Richard Thierot, as Tony Lumpkin, Kate’s step-brother and Constance’s cousin, brings energy and a welcome wildness particularly to the scene with Mrs. Hardcastle (his mother) when discussing the seemingly stolen jewel box that contains almost all of her fortune. But he is not under 21, and Tony is, so I didn’t buy that it takes him until the middle of Act Two to  become “of age.”

Years ago I saw a production of the play (in 1971) on Television, and it’s still in the BBC archive. It features an all star cast including Ralph Richardson, Juliet Mills, and Tom Courtenay and that’s the one to visit if you really want to see what pleased the press and the public just a while back, in 1773.

Next up for TACT, in February, is The Grave Digger’s Lullaby by excellent actor member Jeff Talbott. Its promotional material reads: “Love and hate. Rich and poor. It all ends up in the dirt.” Now that sounds interesting. 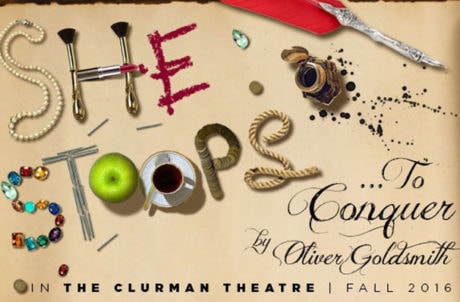