The dual intersections of tradition and the authenticity of the individual, autonomous human being compartmentalize, collide and—then —slowly merge in the Rainbow Theatre Project’s thought-provoking new production No Word In Guyanese For Me. This intriguing title refers to the fact that there is no word that is the equivalent of the word “lesbian” in the solo character’s country of Guyana and that the strictures against homosexuality are so severe in her religion of Islam that she cannot even ponder such a notion without committing a sin.

This extremely moving one-woman show portrays the gradual transformative evolution of a Guyanese Muslim woman a she subtly awakes to the realization that she is attracted to her own sex. This gradual awakening is not portrayed as an easy path — for strict religious laws, tradition, conformity, and anti-Muslim prejudice all strive to impede her path with the obstacle called “harsh reality.”

I have never witnessed a show billed as a “Reading” where the actress made the book in her hand seem almost superfluous.

Ashley K. Nicholas, as the central solo character of this absorbing play, was an absolute marvel and joy to behold in every nuance of her role. Actually, she embodied many other characters as she used pronounced and variegated vocal inflections to embody her religious Auntie, her boorish husband and the woman who has awakened her sexuality.

I am not being overly zealous in my praise when I say that Nicholas was totally immersed in her character and a joy to watch from the beginning of this ninety-minute play right until the very end. She etched out her character with fluid precision as the play propelled a series of alternately dramatic, captivating, defiant, and introspective moments that often sent chills up the spine.

Nicholas moved in a very natural yet commanding manner as she moved across the spare stage consisting of a table and two chairs. She used her book as a prop and barely looked at it –hundreds of lines were, indeed, memorized and made immediately emotionally accessible to the audience.

Nicholas excelled most enthrallingly when speaking in moments of “reverie-like” repose and reflection; these moments were embodied in the form of dramatic monologues that were so heartfelt it seemed as if I was listening to her most quiet interior thoughts. The monologue where she pondered her attraction to a woman she met at a campus LGBTQ table was a knockout as was her portrayal of not being attracted to her husband when he demanded sex. Another standout was the actress’ well-played horror and dismay at the events during and after the attacks on the World Trade Center on 9/11.

This brilliantly written play moves through such a variety of moods and tones due, also, to the superb playwriting of Wendy Graf. She employs a series of “flash-forwards” and “flash-backs” in timeframes to show the significant passages and events that affect the life of our solo character as she moves from being a five-year old child in Guyana to a fifteen-year old teenager in NY City to being an accomplished and evolving human being in her mid-twenties.

Playwright Graf eschews conventional writing and draws the audience into the circuitous journey of life that mirrors the psychological development of our lead performer. It is no small wonder that she has won numerous Theater awards.

Director Julia Hurley possesses an ability to totally immerse the audience’s attention throughout ninety minutes of an extremely verbal and complex play. Hurley places a probing and penetrating eye on the world of intolerance and fear that a Muslim must face in an intolerant world; this intolerance is only compounded if said Muslim is also a lesbian.

However, through all the grime and obstacles of real life as we know it —Director Hurley always offers glimmers of hope that only a survivor like the character Ms. Nicholas portrays can truly understand. 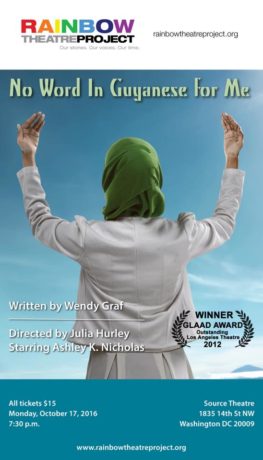 Love-triangle comedy by Shaw coming next from Washington Stage Guild