Chesapeake Shakespeare Company’s (“CSC”) production of Anne of the Thousand Days, by Maxwell Anderson, hit the stage this weekend. I had the pleasure of attending opening night and enjoying a surprisingly topical account of one of the most famous, and tragic, love stories in British history. Anne of the Thousand Days tells the story of the tumultuous courtship and marriage of Anne Boleyn and Henry VIII, King of England. Their scandalous romance changed history – dividing a nation, creating a new religion, and causing the world to reexamine the relationship between women and power.

Helen Hayes Award-winning Director Kasi Campbell’s take on this play is refreshing and unexpected. Having read the script and seen the 1969 film adaptation, I expected the typical, solemn telling of the ill-fated story of Anne Boleyn. Now, don’t get me wrong; there’s no getting around Anne’s story being a tragedy. That’s historical fact. What is so novel about this production is that Campbell finds the humor in the script and gives the audience permission to laugh at the King’s seemingly boundless arrogance.

A particularly memorable scene occurs early in the show, when Henry and Anne are having a quite serious conversation while sashaying and hopping through a saraband – a late-Renaissance court dance involving very light footwork. The juxtaposition of their conversation and their movements was absurdly comical.

Resident Acting Company Member Ron Heneghan, as King Henry VIII, admirably executes the task Campbell has set before him. His comedic timing is excellent. His delivery of lines and his skilled physical acting got big laughs from the audience, not because he was clowning or being a caricature, but because he so sincerely played the role. He made Henry VIII a person. Sure, he was the embodiment of ridiculously entitled male privilege – and we laugh at the ridiculous – but he was also just a man. He was aware that everyone did and said what they thought he wanted, whether genuine or not. In a nuanced, well-crafted performance, Heneghan managed to present Henry’s vulnerabilities and self-doubt alongside the narcissistic tyranny born of his station.

Heneghan was well-matched with Resident Acting Company Member Lizzi Albert, who likewise gave a first-rate performance, playing Anne Boleyn. Albert’s Anne was bold, proud and determined. While giving proper deference to Henry the King, she treated Henry the man as an equal. Albert ably portrays Anne’s strength and defiance in relation to Henry, as well as the soft and playful side that she – still quite a young woman – lets show in the company of her court. Albert’s physical acting was also spot on. From the comfortable joy she expresses with Lord Percy Northumberland (the talented Gerrad Alex Taylor) and her lithe dancing with friends to the stiff, angry posture she displays with Henry, Albert’s body reveals her character’s feelings.

It’s challenging to write a review when the entire cast and creative team did such a good job. I don’t have the space to laud everyone and I don’t want to leave heroes unsung. But how do I not mention how creeptastic Resident Acting Company Member Gregory Burgess is as the scheming Cardinal Wolsey or how Yury Lomakin rocked the role of Wolsey’s opportunistic secretary, Thomas Cromwell? Can I really not mention how much Resident Acting Company Member James Jager wowed me as Henry’s court musician and confidant, Mark Smeaton? You’re just going to have to trust me; all the actors in this production brought their ‘A game’ and it shows.

The design and production team for Anne of the Thousand Days is special in a couple of ways. First, like their on-stage colleagues, they all performed their jobs impressively. Second, they were primarily women. Producing a play centered on one of the most memorable and powerful women in history, Managing Director Lesley Malin decided to “assemble an all-woman production crew to shine a spotlight on opportunities for women in our industry.” These talented craftspeople did a universally great job, consistent with CSC’s high standards.

Singling out just a few of these artists, I have to point to the excellent work done by Costume Designer Kristina Lambdin, Set Designer Kathryn Kawecki, and Sound Designer Sarah O’Halloran. Lambdin’s costumes are lush and beautiful; of particular note are the red frock Anne wears dancing, Anne’s painstakingly detailed coronation gown, and all of Henry’s jewel-encrusted, fur-lined regalia.

The production of Anne of the Thousand Days is surprisingly timely. Managing Director/Producer Lesley Malin notes, “When I chose Anne six months ago, I could not have predicted the recent headlines of the political campaigns. Those issues are powerfully reflected in this particular play, with its protagonist declaring, ‘I, too, can say no,’ to a predatory and controlling monarch.” In fact, there is a whole scene dedicated to the issue of consent, in which the King seeks advice on wooing Anne. When Henry asserts, “You must have consent,” Anne’s own uncle, the Duke of Norfolk (Keith Snipes) replies, “Nonsense. Take her and make her like it. Why should a woman have anything to say about it?” It is dismaying that, for some powerful men, this sentiment remains unchanged since 1526.

If you have an interest in the turbulent and, ultimately, fatal relationship between Anne Boleyn and King Henry VIII – or just want to see some impressively crafted theater – with an outstanding cast and an excellent creative team – be sure to catch a performance of Chesapeake Shakespeare Company’s production of Anne of the Thousand Days.

Running Time: Two hours and 40 minutes, including one intermission. 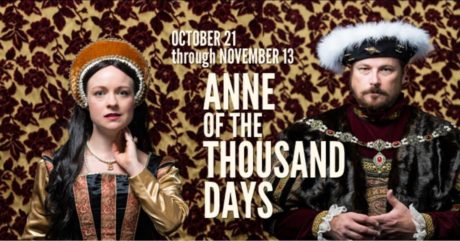 Anne of the Thousand Days plays through November 13, 2016 at Chesapeake Shakespeare Company – 7 South Calvert Street, in Baltimore, MD. For tickets, call the box office at (410) 244-8570, or purchase them online.
__
Parking is available at at Arrow Parking, a covered lot on Water Street less than two blocks from the theater. It’s only $5.00 with a special voucher you can obtain at the theater during the show.

Free, pre-show talks will accompany two of the performances:

From 6:30 to 7:30 pm on October 29, 2016, the production design team of Anne of the Thousand Days will lead “Designing Women,” a panel discussion on opportunities for women in theater’s technical and design fields. (RSVP here.)