A funny thing happens on the way out of American University’s fabulous new production of A Funny Thing Happened on the Way to the Forum. You find yourself humming along to “Comedy Tonight” or tapping your toes to the infectious “Everybody Ought to Have a Maid”. And you can’t help but smile at the memory of this slapstick bit or that bawdy jibe. In short, AU’s production of Stephen Sondheim’s classic farce (with book by Burt Shevelove and Larry Gelbart) is just as side-splittingly funny and riotously entertaining as you’re likely to find this side of the agora.

A Funny Thing Happened is a frothy sendup of ancient Roman comedies, which themselves relied heavily on stock characters, slapstick humor and bawdy jokes. This is certainly true in this production, where director Cara Gabriel coaxes her cast to be extra sexual, uber physical, and totally ridiculous. This is epitomized by the famous opening number “Comedy Tonight” when the slave Pseudolus (Izzy Smelkinson) sings about all the tricks she has up her sleeve (er, toga?) to make the audience laugh. For her part, she succeeds wildly. Smelkinson is a superb Pseudolus, combining sharp comic timing with a hilariously high-stakes commitment to all of her tricks and ruses.

As she sings in “Free,” all Pseudolus wants is to escape her bondage. So, when she finds out her master Hero (Matt Winton) is in love with the courtesan next door, Philia (Lauren Farnell), she strikes a bargain with him: she’ll get him the girl, and he’ll give her freedom. Winton is heartbreakingly silly as the love struck Hero, floating around the stage as though there is a perpetual posse of cherubs fluttering beside him. And his rich baritone voice makes for a beautiful rendition of “Lovely.” As the virginal Philia, Farnell exudes a demure grace, which makes her occasional sexual overtures all the more priceless.

So what is stopping these two lovebirds from strolling off into the Roman sunset? A lot, as it turns out. First, there is Hero’s mother, Domina (Erica Kilgore), who is obsessed with keeping her son blissfully ignorant about the mysteries romance until such time as she deems fit. With an uber operatic voice and a heavy unibrow, Kilgore plays the perfect stereotype of an overbearing mother (culminating in her wonderful ballad to her husband, “That Dirty Old Man”). She charges her loyal slave Hysterium (Mark Sullivan) to uphold her puritanical dictum while she and her husband take a trip the country. Sullivan may just steal the show with his pitch-perfect portrayal of the neurotic, high energy Hysterium. He presents such an enigmatic stage presence that it’s hard to take your eyes off him as he jumps around trying to put out various fires, anxious despite his ironically titled “I’m Calm.”

But it isn’t just prudish parents and watchful slaves that thwart Pseudolus’ matchmaking. You see, Phila has been promised by her pimp, Marcus Lycus (Robin Weiner), to Captain Miles Gloriosus (Seth Andrew Watring), a renowned soldier who is held in high esteem by everybody in Rome, especially himself. Marcus, usually played by a man, is here played by Weiner, who does such a fine job I forgot it was originally a male role in the first place. Likewise, Watring is perfectly pompous as Milos Glorioso. He struts and preens around the stage with a gloriously exaggerated flair, especially in the catchy numbers “Bring Me My Bride” and the hilarious “Funeral Sequence.”

If all that weren’t enough, Hero’s father Senex (Anthony Nimmo) returns early to find Philia, who mistakes him for her captain, fawning all over him. Father and son are loth to believe that the other is chasing the same woman (a conundrum expressed in the wacky number “Impossible”). Luckily for Senex, the house of his neighbor, Erroneus (Manna-Symone Middlebrooks) is empty, providing him with a space to attempt a tryst with Philia. As Erroneus, Middlebrooks is an exquisite old geezer who plays her part with clownish impeccability. When she returns unexpectedly early (which seems to be a theme in this show), ever more ridiculous hijinx ensues.

Naturally, Pseudolus cannot let her master’s one true love marry someone else. So she devises plan after plan to keep them apart, each of which is complicated by increasingly farcical obstacles. All of this culminates in a spectacular Second Act chase scene involving a lot of door slamming, hidden identities, and eunuchs – a lot of eunuchs. This comic gem of a sequence, choreographed by Robb Hunter, exemplifies what is great about Forum. It is a true farce, a classic comedy that everyone can enjoy

One of the great strengths of the show is its numerous ensembles (like the aforementioned eunuchs) which pull off the great trick of being cohesive enough to make sense as a whole while still allowing each member to have his or her own unique personality. For example, the numerous ladies of the night in the employ of Marcus Lycus – Vibrata (Zhane Davis-Smith), Tintinabula (Chrissy Martino), Geminae (Brooke Friday and Saira Grewal), Panacea (Hannah Ruth Wellons), and Gymnasia (Patrick McLaughlin, in a commendable drag performance) – all work together to create the atmosphere of a wild and hedonistic Roman society. 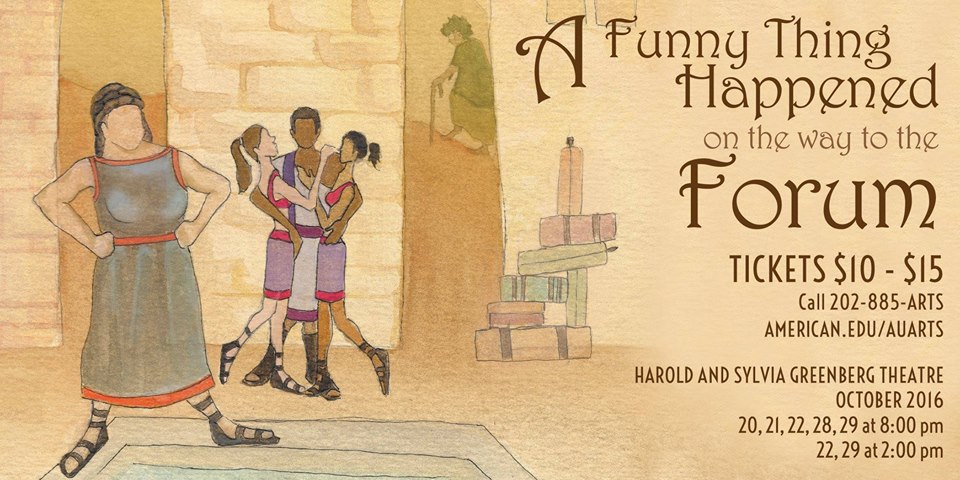 Likewise, the ensemble known in the show as the “Proteans” do a splendid job of appearing as a cohesive group, adding texture to both the songs and the stage picture.

Director Cara Gabriel points out in her program note that:

“with farce, one need not have a shared religion, political viewpoint, or cultural perspective with one’s neighbor to find the simple joy in silly, overblown characters.”

There is indeed something universally humanizing about A Funny Thing Happened on the Way to Forum. In this time of intense polarization and negativity, there is no doubt that we could all use a comedy tonight.

A Funny Thing Happened on the Way to the Forum plays through Saturday, October 29, 2016 at American University’s Greenberg Theatre – 4200 Wisconsin Avenue NW, in Washington, DC. For tickets, call the box office at (202) 885-2587, or purchase them online.