In Part 3 of a series of interviews with the cast of Peace Mountain Theatre Company’s A Delicate Balance, meet Leah Mazade.

Leah: I’ve been performing in the DC area for some 30 years now, appearing at various community theaters in Maryland: Silver Spring Stage, Chevy Chase Players and Montgomery Playhouse, to name a few. I was also very active, as both an actor, director, and member of the governing board, at the former Cedar Lane Stage, appearing in several plays by Shakespeare and other classic authors. More recently, I’ve appeared with Quotidian Theater Company, in Bethesda, where I’m also a member of the board. My latest ventures have been the roles of Kate Keller, in Peace Mountain Theatre Company’s 2015 production of All My Sons, and Grandma Kurnitz, in this past summer’s production of Lost in Yonkers, at Prince George’s Little Theater.

I’ve always found Albee’s plays fascinating and have had a special fondness for them since appearing several years ago in his Three Tall Women. I’ve seen a couple of productions of A Delicate Balance that I found really compelling, so I was excited to be able to explore the play more closely by being in it.

Who are you in the show and what is your relationship to the other characters? How do you relate to your character?

I play the role of Edna in the play. My husband Harry and I appear on the doorstep of the main characters, Agnes and Tobias, “our best friends in the world,” and make a claim on that friendship that strains the relationship and sets the conflict of the play in motion. Our demand destroys the “delicate balance” of Tobias’ and Agnes’ lives and relationship and causes Harry and Edna to examine themselves and their values as well.

I’m really enjoying playing Edna. She gains insight throughout the play and eventually is able to look fairly clearly at her life and relationships, which I find rather admirable. If the question means, do I see aspects of myself in Edna, then the answer is yes—but then that’s always the case with the characters that I play.

I feel very lucky to be playing Edna. Like many other people, I consider Albee one of our greatest modern playwrights, and it’s a privilege to be able to speak his words and offer, in my modest way, a tribute to his memory.

I think Edward Albee will be remembered as a genius of the modern theater. I’m not sure I can “define” an Albee play. It seems to me that, like all the best plays, they’re characterized by humor, imagination, and a fairly surgical and insightful investigation of human relationships.

What do you want audiences to take with them after seeing “A Delicate Balance“?

I hope they’ll have a sense of why he’s considered such a great playwright and specifically, in the case of A Delicate Balance, of his compassion for “those who settle in too easily” and who, in his view, ultimately endure rigidity and paralysis, discovering that “all the choices they have avoided no longer give them any freedom of choice, and that what choices they do have left are beside the point.” 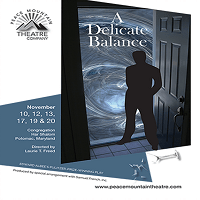