The Reston Community Players (RCP) opened their 50th Anniversary season on Friday with Gypsy, known as one of the great American musicals. With music by Jule Styne, lyrics by a young Stephen Sondheim, and book by Arthur Laurents, Gypsy tells the story of the quintessential stage mother, Rose Thompson Hovick, known simply as Mama Rose in the show. With an energetic score, compelling storyline, and talented cast, RCP’s production of Gypsy does not disappoint!

Director Paul Tonden and Scenic Designer Bart Healy set the tone right from the beginning of the show with a set featuring stage lights and curtain segments. Their use of a central curtain that left parts of the wings exposed was creative and immediately immersed the audience in the world of the theatre.

The show opens with a group of children auditioning for a talent show, and the kids in this performance: Kylee Hope Geraci (Baby June) and Sarah Makl as Baby Louise, were very cute. Geraci and her counterpart as Dainty June, Evie Korovesis, are hilarious in Andrea Heininge’s clever and funny choreography in the over-the-top performance numbers like “Dainty June and her Farmboys” and “Broadway.” Among the kids, the young newsboys (particularly the littlest one!) were absolutely adorable.

At the emotional heart of the show is the story of Mama Rose and her stop-at-nothing quest to turn her daughters into stars. Jennifer Lambert plays Rose with intensity, humor, and an appropriate touch of mania, and her powerhouse vocals nail Rose’s classic numbers, made famous by the legendary Ethel Merman. Lambert finds a balance between the humor of Rose’s insane pursuit of fame and the seriousness of the emotional damage she is doing to those around her. Her performance of the climactic number “Rose’s Turn” brought down the house and became wonderfully vulnerable. She and Herbie (Blakeman Brophy) had great chemistry, who brought out the vulnerability and sadness in Herbie’s character. In one crucial moment, his performance elicited several audible reactions in the audience.

As Louise, Elizabeth Gillespie was very compelling in showing the evolution from shy, awkward girl to confident woman, particularly throughout the striptease scene. She has a beautiful voice and used it to great effect to show Louise’s vulnerability and eagerness to please in numbers such as “Little Lamb” and “If Momma Was Married.”

Although they don’t get much stage time, washed up strippers Tessie Tura (Shaina L. Murphy), Mazeppa (Karen Kelleher), and Electra (Jaclyn Young) stole every scene they were in. Their rendition of “You Gotta Get a Gimmick” was absolutely hilarious and each of their unique character choices and vocal types were used to great effect! Murphy was also hilarious as snooty secretary Miss Cratchitt.

Erich DiCenzo was also a standout as Tulsa—his dancing in “All I need is the girl” was fun and suave, and Heininge’s choreography showcased his skills well. It was easy to see why Louise was taken with him, and the two of them had nice chemistry.

Director Paul Tonden and Producers Chris Dore and Cara Giambrone have created a production of Gypsy that RCP can be very proud of. It’s a great evening of theatre to open their 50th season! 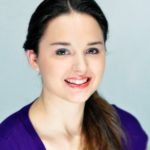 Caroline Griswold Short is a dancer, singer, and actress who has performed around the DC region and across the east coast. She is a graduate of Duke University, where she earned degrees in Dance and English.