In Part 1 of a series of interviews with the cast of Greenbelt Arts Center’s Dinner with Friends, meet Director Bob Kleinberg.

Joel: Please tell our readers where they may have seen your work on our local stages.

Bob: This is my fifth time directing at Greenbelt Arts Center (GAC), prior ones being Doubt, Frost/Nixon, Clybourne Park and Bad Jews. I’ve also performed in over 20 productions in numerous local theaters including GAC, Silver Spring Stage, Laurel Playhouse and Hallam Theater at PGCC. My favorite roles were Lenny in Any Given Monday, James in Moon for the Misbegotten, Leo in Chapter 2 and Lawrence in For Whom the Southern Bell Tolls.

What made you want to direct Dinner with Friends?

I read a number of plays in order to select my next production and I share this process with my wife Wynne. She and I are both in our second marriage and Dinner with Friends struck a particular chord with us. The emotional roller coaster that all the characters had to ride was familiar to us, both from the side of the marriage falling apart and from the close friends watching it.

Mr. Marguiles’ style of writing feels so natural. Nothing that any character says feels forced or contrived. The actors seemed to connect with it immediately. Furthermore, the back and forth of the dialog, with overlapping and abrupt cut-offs, were analogous to the manner of common speech. It is familiar to the ear.

One of our favorite lines occurs in Act 1, scene 1, when Beth is in tears telling her sad tale and Karen, still not absorbing its impact and remaining centered on their former dinners together, says “But we loved their Tikka Masala”. To me, it is a metaphor for how we can be so absorbed in mundane things and overlook the important ones.

What is the show about and how can audiences relate to its messages and themes and characters?

This show explores the emotions that surround the dissolving of marriage – its impacts on the couple, their friends’ marriage and their friendships. In today’s world, so many marriages end up on the rocks and it is not just the two people in it that get scarred; there is fallout everywhere. It is hard to imagine anyone in this day and age not finding themselves at times in one or more of the character’s emotional states.

What are some of the challenges you are facing directing the show? What scene or scenes were the most challenging for you to direct?

Scene changes have posed the greatest challenge for me. We have six different locations to depict and they swap back and forth. I do not like the delays that come with scene changes; audiences begin to lose connection with the play. Working with the stage manager (my wife), we have had to constantly consider how to orchestrate the set changing ballet so that we could get through them quickly. The most challenging scene has to be the end of Act I, scene 2. The fight choreography was worked and reworked multiple times to try and bring the correct intensity of feelings to the moment.

How did you prepare to direct the show? Talk about your process.

There are several phases that I go through once I’ve selected a play to direct. In the beginning, my wife and I read the play several times to begin to understand where the play is intended to go. I research the play on-line, looking for hints from other performances, playwright comments and general notes. I then begin to compose my view of where the show’s heart lays and think about how we will get there. Next, I work out some of the mechanics, that is, basic staging of the play (PowerPoint is my friend!), break down the script into rehearsal sections, and create a nominal schedule. I make sure to include a character study about half way through the rehearsal period in order to give the actors the chance to absorb their character before discussing it. Depending on the production, I will conduct the study either individually or in groups. I record all the auditions. I cannot remember beyond the audition itself any specific things a particular actor does. This way, we can sit in the comfort of our family room, watch the big screen and review combinations of actors, their facial experiences, vocal tones and physical movements. And, occasionally, we get some fun bits to replay after the show is over.

What have you learned about yourself- the director- during the casting process and rehearsals?

The directing process has brought out the collaborative part of me. I am not a dictatorial director; I prefer to work with the actors and tech crews to work out ideas and problems together. Yes, I have the final say, but I have found that I rely on the group working together to bring this about. As an actor, I try to put myself in my cast’s place, see things through their eyes. And I always repeat to them that “they are on stage, not me.” I have strongly encouraged ownership of their roles.

Introduce us to your cast and tell us what they each bring to your performances.

First off, I want to say that each of the cast has been superb in fitting into their characters. I worked with Jim Adams (Gabe) in Clybourne Park and I was familiar with his talent; I was thrilled he auditioned. He naturally feels to me like Gabe, he can be self-absorbed, but when necessary, turns it on when pushed too hard.

As soon as I heard Michelle Johncock (Karen) audition, I knew she was Karen. You could feel the edginess, yet the warmth came through, too. She auditioned with Jenna Jones Paradis (Beth), and when they did the garden lunch scene, they looked like two old friends. I’ve worked with Jenna before and knew that she had a bit of Beth in her; I believe this role brings that out.

Brian Lewandowski (Tom) was an obvious choice. He has a little bit of the “tomcat” that the script seems to call for, yet covered by the aura of conventionality. Now that I have seen them all in action, I am thrilled at the chemistry that has formed.

What character reminds you most about yourself? And how and why?

I connect the most with Gabe. Like him, I am introspective, maybe a little slow on the uptake about things, but definitely emotional when pushed. I have 5 long-term friends whom I’ve shared my life with for over 40 years, one of whom, my best friend Bruce, for over 50 years. I understand the connections that grow between friends and then their families. I also connect with Beth. I went through a divorce many years ago and I vividly remember having to tell Bruce about what had happened; Beth’s breakdown was my breakdown, too.

Greenbelt Art Center can be a challenging venue when in “thrust” with audience on three sides. From a purely directing perspective, this challenges us to try and make sure sight lines for all the audience are maintained. This can be difficult. As the designer for this set, I had to work hard to meld the elements of the 6 different scene locations using a common space. By using subtle colors on the set background, we are able to move between spaces more easily. Additionally, using the opposing downstage poles and focusing lighting for Act II, scenes 2 and 3, afforded me the opportunity to separate them from the rest of the set.

Have you brought any personal experiences that have influenced your directorial decisions?

Based upon my emotional breakdown scene with my friends several years ago, I pay particular attention to the first scene and Beth’s breakdown. I want to feel that it is me up there, repeating the painful session among friends so many years ago. I’ve also experienced the ennui that comes in a marriage as kids come, and the mortgage has to be paid and the snapper needs to be marinated, etc, and the internal questions that parallel them arise – “is this all there is?,” “Am I really happy here?,” and watch to make sure Karen and Gabe begin to express them.

What do you want audiences to take with them after seeing Dinner with Friends?

I gravitate to shows that cause the audience to walk out thinking about what they just experienced. With Dinner with Friends, I hope they will leave the theater thinking about where they are in their own relationships and how they can nurture them in the future. I know I am. 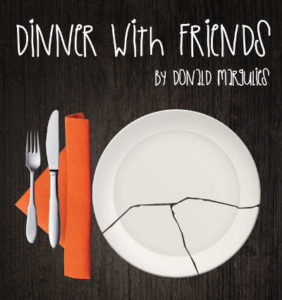