American University’s Greenberg Theatre performed a hilariously funny ancient Roman farce, A Funny Thing Happened on the Way to the Forum. With music and lyrics by the incomparable Stephen Sondheim and book by Burt Shevelove and Larry Gelbart, it is uproarious and irreverent, raucous and rowdy, and is sure to please. Director Cara Gabriel and Musical Director Elizabeth Gerbi are skillful and creative as they take a fresh interpretation on the Tony Award-winning 1962 Broadway musical.

Let’s first take a look at the story line. If you were a slave, wouldn’t you want to become free? That’s how Pseudolus (Izzy Smelkinson), a slave in ancient Rome feels. But how can she achieve her freedom? Well, it’s complicated, very complicated.

Her master, Hero (Matt Winton), is madly in love with the girl next door. But the house next door is a bordello, so his love is a prostitute named Philia (Lauren Farnell). But, Philia is a virgin. And, she’s engaged to marry the greatest military captain in Rome, Miles Gloriosus (Seth Andrew Waring). And, he’s coming to pick her up soon. So, to save Philia for her master, Pseudolus invents a story that Philia has a plague.

In the meantime, Hero’s parents are a bickering couple and his father is lusting after Philia, too. And another neighbor, Erroneous (Manna-Symone Middlebrooks), is searching for “his” long lost son and daughter, who were stolen by pirates in their infancy.

While this is happening, Pseudolus needs mare’s sweat to complete a love potion. Why, you might ask, does he need mare’s sweat?  The descent into craziness is well worth the trip.

Elizabeth Gerbi conducts a ten-piece orchestra and provides flawless accompaniment throughout a challenging score. They are note perfect, even when the cast does bits of business in the middle of the songs!

The entire cast is wonderful as well. The ultra-talented Izzy Smelkinson as Pseudolus is a natural comedian. Her facial expressions are precious; her dance moves are acrobatic; and her rapid-fire comedy lines bring the house down. And, let’s not forget her singing voice. She leads the cast in “Comedy Tonight” which sets the tone for the entire show. She is comical and serious at the same time as she reveals her dreams in “Free” and she is delightful as she sings “Pretty Little Picture” with amazing choreography.

Matt Winton portrays Hero, a young man who is, shall we say, not the brightest bulb in the box. (He’s a virgin, too.) He instantly falls in love with the courtesan Philia and whenever anything goes wrong, he tries to kill himself! At the same time, Winton is head-turningly handsome and has a singing voice that is smooth as velvet and very romantic. Philia, played by Lauren Farnell, is even more intellectually challenged than Hero, but she is beautiful and has a sweet, soprano voice that is totally captivating. Philia and Hero combine to sing “Lovely”—and it certainly is. 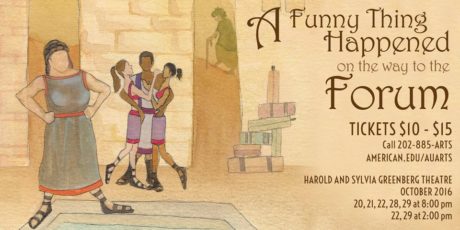 Hero’s father is Senex, played by Anthony Nimmo, a man who is disappointed in his love life. At one point, he advises the audience to “never fall in love during a total eclipse.” But, he has a splendid singing voice and comic timing which he displays in full measure in “Everybody Ought to Have a Maid.” Erica Kilgore portrays Domina, the wife of Senex, who sings beautifully about her mixed feelings in “That Dirty Old Man.”

Seth Andrew Waring takes on the role of Miles Gloriosus, a military captain with a brilliant baritone voice who makes every move in ballet steps and the result is hilarious. Mark Sullivan plays the chief slave, Hysterium, who is frenetic and funny and displays excellent comic timing in a “dual role.” And, Robin Weiner as Marcus Lycus, and all her courtesans and eunuchs, as well as the proteans are superb.

Britta Joy Peterson provides generous helpings of superb choreography throughout the show. Very clever, very athletic and very hilarious—the dance moves are a wonderful combination of the traditional and the unusual. In one case, the dancers manipulate a strip of cloth to evince the waves on the ocean.

Jason Arnold’s set design is elaborate and beautiful with three large, fancy houses, Roman columns, and a marble pool with a working fountain. Costume Designer Barbara Tucker Parker provides colorful gowns with spangles, sequins and tassels and a very special feature for one of the courtesans.

LINK:
Review #1: ‘A Funny Thing Happened on the Way to the Forum’ at American University