EgoPo Classic Theater is starting off their Russian Masters season with a mind bending production of Delirium, an adaptation of The Brothers Karamazov by Theatre O and Enda Walsh. The show follows a mentally disturbed family that uses mindgames and intimidation to manipulate each other for their own benefit. Delirium is directed by the insanely creative Brenna Geffers who uses her strong background in movement and devised work to create a world like no other. It’s a maze of a show that is well-crafted and intriguing to watch.

With such a crazy show, a strong cast of fearless actors is needed, and that’s exactly what Geffers had to work with. The ensemble of actors, made up of Robert Smythe, Chris Anthony, Johnny Smith, Anthony Crosby, Kayla Anthony, Kelly McCaughan, and Ross Beschler, are fearless and dive headfirst into the loony bin. They all support each other wonderfully and fully commit to their disturbed characters. Ross Beschler is especially fantastic as the supposedly ‘thick skulled’ Smerdyakov. His story telling is captivating and he gives an extremely charged performance. Kelly McCaughan also has some powerful moments as the psychotic Katerina.

The colorful and somewhat chaotic design elements do a great job of reinforcing the show’s manic themes. Brian Jones has crafted an interactive set that lets actors climb, jump, dive, and crawl all over the stage. Jones also created hilarious puppets that help actors reenact flashbacks, which are wonderful moments of hilarity.

Eric Baker’s lighting design id dynamic and Natalia de la Torre’s costumes do a magnificent job of taking the unique personalities of each character and shoving them in your face. For me, Lucas Fendlay’s sound design is a standout. It’s clear to me that every song was carefully picked and his detail work is great. The sound is crisp, clear, and well-placed. Overall, each aspect of design is strong.

EgoPo Classic Theater’s Delirium is a major shock to the system that is both terrifying and exciting. Delirium is crazy, fun, brave, risky, and a must see. 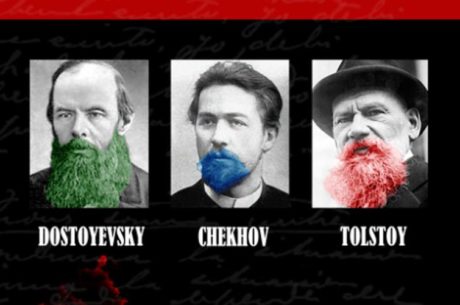 Note: The show uses theatrical firearms and strobe lights. The Latvian Society is not completely handicap accessible and any audience member who needs assistance should call the theatre ahead of time at (267) 273-1414.