It’s hard to believe The Rocky Horror Picture Show is now over 40, and still going strong. This Halloween, there are several productions of the rock musical happening in the area, and Maryland Ensemble Theatre and Frederick Community College have mounted a co-production running through November 5th Should audiences come up to the lab and see what MET/FCC have on the slab? But first, a little background.

In the early seventies, British Actor Richard O’Brien wrote The Rocky Horror Show out of a love of B-movie science fiction and a desire to explore his own evolving sexuality. It is the story of Brad and Janet, two square kids in love and newly engaged. While driving in a rainstorm, their car breaks down. They seek shelter in a nearby castle. It’s their bad (or perhaps good) luck that a strange convention is taking place there that very night. Overseeing this peculiar gathering is Frank N. Furter, a mad scientist and self-described “sweet transvestite from transsexual Transylvania.” During their stay at the castle, Brad and Janet find themselves liberated from their fifties-style sexual repression.

The Rocky Horror Show was a long running hit in London and LA.  (The 1975 Broadway run was less successful.) That year saw the release of the famous film version, called The Rocky Horror Picture Show. It starred O’Brien, future Oscar winner (fresh off Grease on Broadway) and rock star Meatloaf. Tim Curry recreated his stage role as Frank N. Furter, and his electric performance, in time, made him a star.

The film had little impact when it was initially released. But, famously, it found a sustained afterlife as a midnight cult phenomenon. Fans would come to the theatre dressed as their favorite character, and during the screening, they would shout out ironic responses to the dialogue.  These became codified over time. As for the original stage play, it has become a staple of amateur and regional theatres worldwide. A successful Broadway revival opened in 2000. The television show Glee did a Rocky Horror-themed episode in 2010. And a new TV adaptation aired on NBC earlier this month (featuring Curry as the narrator).

Overexposure and a relaxation of sexual mores have robbed Rocky Horror of some of its ability to shock. But its energy and entertainment value remain potent.

At the MET’s October 28th performance, the audience was wildly enthusiastic. Many had come in costume. Some participated in film-style shouted responses (augmented by chorus members in the cast onstage). This aspect did, at times, throw the actors off their rhythm. Still, no one seemed to mind. Several audience members stood up and danced during “Time Warp.” This show is as much party as theatre. A tossed-off joke mocking Donald Trump got a big laugh.

Among the cast, Tracy Haupt’s Janet was my favorite vocal performance. Clay Comer brought high energy and an unabashed lack of self-consciousness to Rocky.

Eric Jones was a boldly memorable as Frank. Karli Cole tap-danced with aplomb as Columbia. As Brad, Jeremy Scott Blaustein had the requisite nerdy charm. Thom Huenger sang Eddie with the authority of a true rock and roller. And the lead cast was ably supported by the so-called “Freak Chorus,” who sang, danced, and helped with transitions.

Director Tad Janes keeps things moving and the audience is never less than fully engaged. The staging of the automobile scene was creative and fun. His set, with an emphasis on red and black was highly effective, and included clever touches, like a staircase that evoked a giant leg wearing fishnet stockings  Paul Shillinger’s lighting made creative use of the upstage backdrop, lighting it in a wide range of different colors. Costumes by Stephanie Hyder, choreography by Bailey Sterling. and lighting by Paul Shillinger were all first-rate.

The show is a high-energy party and the audience ate it up. Toilet paper rolls were thrown. Glow sticks were waived. Janet and Brad were mocked by the audience with single-word insult names. Still, I couldn’t help but wish the production could have found some ways to bring some sincere emotion to the evening. The called responses, while fun, are also consistently sarcastic and mean-spirited. The relentlessly arch irony seemed to set the tone for the evening as a whole. The pure love of Brad and Janet, the sadness of Frank being forced to leave his home, the mourning of a dead friend: These are all moments that could have given the show some welcomed sincerity.

Among the musical numbers, “Time Warp” was, unsurprisingly, a major highlight. Tracy Haupt successfully captured Janet’s burgeoning womanhood in her rendition of “Touch Me.” Eric Jones sold “Sweet Transvestite,” taking full command of the stage like a pansexual rock star. The backup band was small but very effective, enhancing the performances without overwhelming.

Strong performances, a lively pace, energetic production numbers, strong set design and a rocking live band all help turn MET’s Rocky Horror into a fun night in the theatre. They will take you on a strange journey. Check it out. And bring your glow stick! 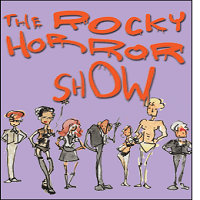