Promises, Promises opened on Broadway in 1968, and while the world it depicts seemed relevant back then, today that world has largely vanished. It’s set in the Manhattan skyscraper home of Consolidated Life Insurance, where the women are all secretaries, hostesses and telephone operators, and the men all cheat on their wives.

In one scene, after seeing a couple kissing at an office Christmas party, the hero jokes that they must be drunk because “they’re married to each other.” That joke barely caused a raised eyebrow back then; today, it might leave an audience shocked and uncomfortable.

But Promises, Promises was a big hit on Broadway, and the current production at the Ritz Theatre Company, directed by Al Fuch, deserves to be a success too. The fine music makes it worth catching, and so do the terrific lead performances.

Promises, Promises boasts the only Broadway score by one of the greatest pop songwriting teams ever, Burt Bacharach (music) and Hal David (lyrics). It’s a great spotlight for some of Bacharach’s distinctive trademarks – the offbeat syncopations, key changes and key signature shifts that help to make the melodies stand out. The book, based on the Billy Wilder movie The Apartment, is one of Neil Simon’s more serious efforts, mixing in tragic scenes alongside the witty ones. (The film version won the Academy Award for Best Picture in 1960). 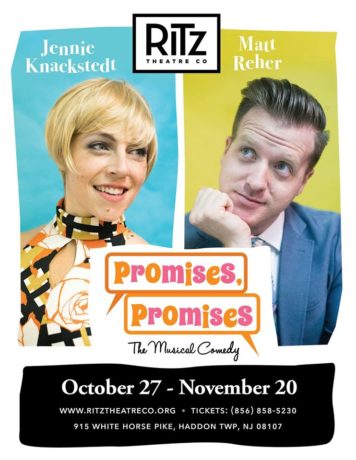 It deals with meek insurance company worker Chuck Baxter, who is so eager to move ahead that he decides to lend his apartment to married executives who need a place for their trysts; in return, Chuck expects a big promotion. The script makes sure we see how conflicted chuck is over his ongoing ethical lapse, but it’s not until he falls for his boss’ mistress Fran Kubelik that his guilt really begins to gnaw at him.

Promises, Promises is slow at times and I wish the early scenes had more momentum. And the conflict between nice guy Chuck and his not-so-nice scheme nearly stifles the show during act one. But Matt Reher’s self-effacing charm as Chuck eventually wins over the audience, and so does his rich baritone on numbers like “Upstairs” and “She Likes Basketball.”

And Jennie Knackstadt balances Reher well as Fran. She has a calm, stone-faced presence that contrasts nicely with Reher’s comic extremes. And she shows off a powerful belt on songs like “Knowing When to Leave” and “Whoever You Are, I Love You.”

(This production uses the script from the recent Broadway revival that interpolates two Bacharach/David hits from the same era – “Say a Little Prayer” and “A House is not a Home” – for Fran to sing. Knackstadt delivers them splendidly, but the dialogue added to fit them into the show makes for an awkward fit.)

Fernando Gonzalez is suitably gruff as the uncaring boss, while Michael Murphy makes the most of his punchlines as Chuck’s neighbor. And Jaclyn Dixon has a spirited comic turn as a woman Chuck picks up at a bar.

Tight vocal harmonies are featured throughout, notably in the all-male choral number “Where Can You Take a Girl?” Tina Marie Heinze’s costumes are dominated by bright, attractive floral print dresses for the women. Jenn Colleluori’s choreography was at its best in the cheerfully cheesy “Turkey Lurkey Time,” which used chunks of Michael Bennett’s Broadway choreography and featured a strong ensemble led by lead dancer Jen Zellers.

Running Time: Two hours and 50 minutes, including an intermission.