Guards at the Taj is the story of two young friends, Humayun (“Huma”) and Babur. The two are a sort of Indian vaudeville duo: Huma (Anthony Mustafa Adair) is the uptight straight man, Babur (Jenson Titus Lavallee) the disorganized, dreamy, logorrheic child-man clown. The opening scene finds Babur arriving late at their post outside the wall concealing the newly-finished Taj Mahal, which is scheduled to be unveiled at daybreak. Babur chatters while Huma tries to make him behave like a good Imperial Guard. Babur dreams of being promoted to a guard at the Royal Harem (“a government office like any other, Huma scoffs), and relates his vision of a “flying palanquin,” which he names an “aero-plat.” This prompts Huma to warn him of the punishments for the different levels of Sedition and for Blasphemy (foreshadowing alert). They reminisce about a time they got lost on patrol and built a “raft in the trees” from sandalwood, on which they stayed for three days. Babur marvels at the work of the Taj’s architect, and Huma tells him of the architect’s audacious request to the Shah, prompting a horrendous judgment in response.

This first scene is written as light comedy and played well, if perhaps a little too broadly at times, by Adair and Lavallee. From here, the playwright twists the plot to something darker although still often comedic.

This is very much classic Theatre Exile territory in terms of style: one scene, for instance, calls to mind Exile’s productions of Martin McDonagh’s plays The Lieutenant of Inishmore and A Behanding in Spokane. Director Deborah Block relates the play to what she sees as a culture of fear mongering and suspicion of Others in today’s society; for me, the message seems to be more about the uses of spectacle and spectacular violence in maintaining empire. In any case, the play will make you think. And following the repercussions of the unseen Shah’s decisions on Huma and Babur’s friendship is what should grab and hold an audience’s attention.

Playwright Rajiv Joseph is best-known for his play Bengal Tiger at the Baghdad Zoo, which had a brief Broadway run featuring the late Robin Williams. His dark romance Gruesome Playground Injuries was produced by Theatre Exile in 2011. Guards at the Taj continues Exile’s recent exploration of American plays with South Asian settings, following in the wake of its Barrymore-celebrated production of Ayad Akhtar’s The Invisible Hand last spring.

Deborah Block does Philadelphia a service by providing us this extended look at the work of Adair and Lavallee. Adair has a number of appearances in fairly small roles (including The Invisible Hand); Lavallee is a recent graduate of The Pig Iron School. We can expect to see both regularly onstage.

The design team is tasked with creating at least five different settings, indoors and out, from a simple platform set in the very intimate Studio X space. Colin McIlvaine provides a space and surface that, under Drew Billiau’s evocative lighting can seem lush, dismal, or otherworldly as needed, and even allows the audience a sense of the wonder of being the first to behold the Taj Mahal. Alison Roberts’ task as costume designer may ask the least on the surface – three changes of costume for each, but she pulls off one great surprise and has had to solve a minor nightmare for laundry. Finally, the work of sound designer Brad Pouliot and tabla player/composer Lenny Seidman deserve credit for creating an aural environment both within and between scenes. I don’t know whose responsibility it was, but I very much appreciated the scent of sandalwood as well. Perhaps someday “Olfactory design” will be a regular credit in playbills. 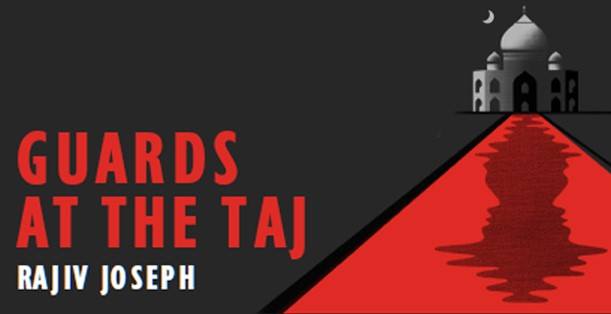