This weekend marks the beginning of the Fifth Annual Charm City Fringe Festival (“Fringe”), a celebration of new and emerging independent theatre that will continue through November 13th. There is a lot of great theater happening here in Charm City. Fringe Co-Founder and President, Zach Michel, hopes this festival will help shine a light on the burgeoning scene, “We want people from across the city, state, and country to know about Baltimore theater, and this is the best year yet to find out!” 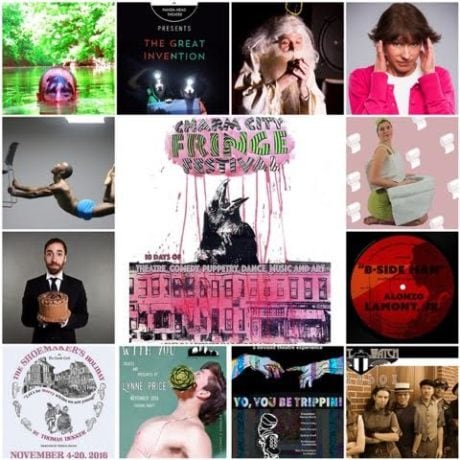 The Fringe is an opportunity to see new and exciting performances you may not be able to catch anywhere else, all compactly presented at select venues across Hampden and Station North. In fact, part of the fun of the Fringe is how walkable it is. In many cases, you can finish watching one performance, then meander down the street to watch the next must-see on your list. Or, if you’re lazy like me, you can just park yourself at one venue and see 3 or 4 shows each evening. Have a break between shows? Local businesses are giving food and drink discounts to Fringe participants – identifiable by the 2016 Fringe Button, which you must have to get into Fringe shows.

THE WAY IT WORKS:

In order to attend Fringe shows, you must purchase a $5 Fringe Button. One button will last you for the whole festival; just be sure to have it on you whenever you are heading to a show. You additionally will need to buy tickets to the shows you want to see, which run only $10 a piece. Alternately, you can buy multi-show ticket passes, which get you discounts: a three show pass is $27, a five show pass is $42 and an All Access pass is $100 and gets you a guaranteed seat at any of the 15 shows in the festival, plus admission to Fringe After Dark after party shows, rehearsals, tech, and more. Plus, unlike the other multi-show passes, with the All Access Pass, your Fringe Button is included. It’s a sweet deal if you plan to see a lot of shows.

The reason you need to get a button AND a ticket to see a show, by the way, is that most-to-all of the money you pay for the show ticket goes directly to the performers. The five bucks from the button sales is what goes to the Fringe itself, to help with administrative expenses. Needless to say, the Fringe is by and large a volunteer endeavor.

The Fringe is also a juried affair. At the Closing Party on November 13th, awards will be bestowed on performers and shows who have particularly wowed the panel of judges.

The Fringe brings together a wide variety of acts. This year brings eclectic choices ranging from Magnificent Machines & Astonishing Tales, a steampunk rock opera, to the self-explanatory One-Man Apocalypse Now, to a dance performance called 12×6, which is “inspired by Reginald Rose’s 12 Angry Men and Frigyes Karinthy’s Six Degrees of Separation concept.” It also includes the first-ever-in-Baltimore production of The Shoemaker’s Holiday, a play I had the pleasure attending last night at Baltimore Shakespeare Factory. 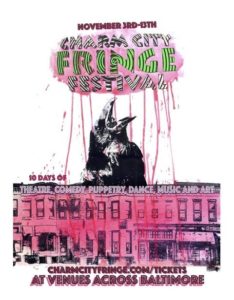 For a full listing of shows, after-parties and events with dates and times and all the details, head over to Charm City Fringe Festival’s site. For a quickie listing of what’s on offer, read on…

The story is partially based on the real life Simon Eyre, a commoner who became the Lord Mayor of London. Rarely performed in modern times, this play was first performed in 1599. It is a perfect example of the popular city comedy made famous by writers such as Shakespeare’s friend, Ben Jonson. The city comedy genre makes the city of London itself a shadow character, and it is also fascinating for its insight into the lives of London’s common people.

Yo, You Be Trippin!

A brilliant Swiss chemist, the C.I.A…. and The Cat in the Hat??? What a dangerous trio! Come take a tab with all three (and more) in “Yo, You Be Trippin?,” a devised theatre piece that opens the doors of perception to the roller coaster ride history of LSD in the USA.

Sharing a Dance with You

Sharing a dance with You by Lynne Price creates a space for sharing and tasting. An immersive, sensory-based dance experience, the show humorously explores topics of gender, trauma and healing. By breaking the fourth wall, the audience is as much a part of the meal as the art.

Imagine Apocalypse Now performed by one-actor, in 60 minutes, recreating some of the most famous scenes from cinema history through Chris Davis’ unique theatrical lens. Backed by the soundtrack of the movie, Davis explores the heart of ‘darkness’ through movement, sound, dance, comedy, drama, lunacy, philosophy, and more in this high-octane 60-minute tour-de-force, directed by Mary Tuomanen. “A strikingly original writer & performer.” – The Scotsman

This Gonna Be on the Test, Miss?

I’m not Michelle Pfeiffer in Dangerous Minds. Welcome to my community college classroom. From LA to Brooklyn, you’ll meet my real students as I teach them in 12 weeks what they should have learned in the past 12 years. Don’t worry– you won’t be quizzed.

It only took one poop, caused by a radioactive burrito, to change Piper’s life forever. When a mysterious toilet monster shows up Piper must go against all odds to uncover his evil scheme. Piper Bidet: Bathroom Detective is her story of when a bathroom came to life.

Sara, a dating advice blogger, has met someone online while traveling in China. Meanwhile, her boyfriend back at home has been acting awfully suspicious. Using social media, you will guide Sara’s choices throughout the show. Will she stay or will she go? You decide: Who’s Dating Sara?

Deus et Machina is for anyone in love with Satan, fearful of snooty French Waiters, or looking to find true spirituality in Cuisinarts.

God: The One Man Show

In the beginning, God said, “Let there be light,” but first! … join The Great Almighty, in his last-minute deadline panic before creating Universe. He might even perform miracles for your entertainment. Get ready to be! Atheists and Believers alike feel enlightened. “A Comedic Hurricane” (Washington DCMetroTheaterArts)

Peter Seifarth and Jess Bryant are the creators of Panda Head Theatre–a company that aims to devise extraordinary physical theatre by highlighting what is surprising and terrific about ordinary things. The Great Invention mingles object theatre with various methods of physical storytelling such as clown, Commedia dell’Arte, puppetry, circus and dance. But at the end of the day, it’s just us, a bunch of junk, and our child-like imaginations.

Inspired by Reginald Rose’s 12 Angry Men and Frigyes Karinthy’s Six Degrees of Separation concept, 12X6 examines personal connections between strangers, friends, and loved ones. 12×6 first premiered as an excerpt in the INTERSECTIONS Festival in Washington, DC. 12×6 will world-premiere in its entirety along with Short’s newest works.

Co-Founders Zach Michel and Michael Brush have created something special with the Charm City Fringe Festival. It’s not only a great place for audiences to see new and cutting-edge theater, it’s also a launching point for some of the artists who participate.

In the past two years alone, we’ve had two companies perform in the Edinburgh Festival Fringe (the largest and oldest fringe on the planet); another perform in the New York Fringe; one company is producing a short film; and another artist recently published a book of essays and short stories. We couldn’t be more proud of the accomplishments of our artists from past years, and I’m more excited than ever with the lineup we’ve put together for our fifth anniversary!

So go check out some (or all) of the offerings at the Charm City Fringe Festival. It supports the community, helps emerging actors get seen (and paid!) and who knows? You might just see a show that’s going to become the Next Big Thing.

The Charm City Fringe Festival plays through November 13, with performances at the venues listed below. For buttons and tickets, purchase them at the door or online. 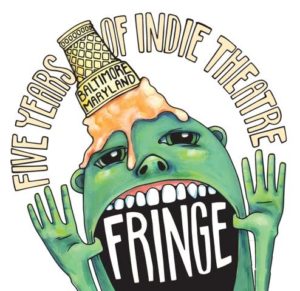