Why do people break up, but never make up? Is having kids a sacrifice or a blessing? Are some people not just built for marriage? Is marriage in Western Society obsolete? Should men join the MGTOW (Men Going Their Own Way) movement? These questions and more are raised in Greenbelt Arts Center’s production of Dinner with Friends. Excellently directed by Bob Kleinberg (his fifth directorial outing with Greenbelt Arts Center), the show follows the breakdown of the marriage of Tom (played with a powerful pathos by Brian Lewandowski) and Beth (the excellent Jenna Jones Paradis, last seen at Greenbelt Arts Center in Chapter Two), and the larger breakup from their best-friend-couple Gabe (Jim Adams, last seen in Greenbelt Arts Center’s Raisin in the Sun) and Karen (Michelle Johncock). 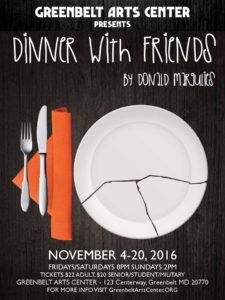 Marriage and long term relationships in general—except for when both partners are made for each other—can often consist of a series life-draining compromises and at worse “degrees of losing” as Danny De Vito’s character in the movie The War of the Roses put it. It is Tom who breaks the boundaries of convention by leaving, and pays an exorbitant emotional price.

Using a non-linear story structure, Dinner with Friends began with Beth in Karen and Gabe’s kitchen, amid a mouth-watering discussion about Italian cooking, confessing that her marriage to Tom is falling apart. Karen and Gabe had introduced Beth and Tom 12 years earlier in Martha’s Vineyard, as shown in one of the flashbacks. The break up is particularly hard on Gabe, who had been best friends with Tom since college.

Lewandowski’s Tom was somewhat the villain of the play. Tom, a lawyer who traveled a lot, having determined that his marriage was passionless, ran off with the proverbial stewardess, Nancy. But there were nuances in the character—objectives that demonstrated why Tom felt he had to leave Beth, including her lack of non-sexual affection. Tom, a self-described “boy-toy at 43,” wondered if settling down was ever in his nature. Throughout the breakup, he simply wanted his grievances to be heard. Lewandowski played every nuance and emotional note to a high degree of verisimilitude.

Jones’ Beth, a mother and artist and a homemaker, was not as sympathetic a character as would seem on first viewing. As her husband Tom moved on with his life, Beth showed no problem moving on with her own. Lewandowski’s and Jones’ bedroom-marital-fight-scene was dynamite.

Adam’s Gabe was the closest character in the show to a peacemaker. It was Gabe who met Tom in college, and along with his wife introduced Tom to Beth. Gabe is a tortured man throughout, at times lecturing his friend Tom, and at other times questioning his relationship with his own wife, Karen, who, after an argument about “what would you do if I cheated,” sees her as “too strict, too principled”. It was Gabe who preached against scratching the marital itch to “chuck it all.” The saddest moment in the show was Gabe’s confession to Karen.

Johncock’s Karen was judgmental, wanting nothing to do with Tom, hating how he could destroy his marriage. Johncock, played Karen with a snide self-righteousness that came close to making her the villainess of the show—good work here.

As an audience member, you’ll have to determine if you identify more with the stable “loving couple” or the couple that went their separate ways. As in all great literature, no definitive answer is given.

Dinner With Friends is thought-inducing theater for not only the dedicated theater-goer, but the casual-fan couple who can take the show as a way to gauge their relationship.

Dinner With Friends is definitely one of the better shows this Fall, so don’t miss it!

A Special Note from Greenbelt Arts Center: Dinner With Friends is teaming with So Others Might Eat (S.O.M.E.). To help out those in need during this upcoming holiday season, GAC has committed to donating 10% of its net proceeds for the Dinner With Friends run. In conjunction with this, GAC is also sponsoring a Can for Candy program. We will exchange a candy of the patron’s choice at the concessions bar for a can or non-perishable box of food