Joel: How did you get involved with Shakespeare Theatre Company’s The Secret Garden? When did you get the call that you were being offered to play Martha? Have you worked in DC before?

Daisy: I made sure Marsha Norman and Lucy Simon (and, really, anyone who would listen) knew that I wanted to be in the Lincoln Center concert last February. I practically threw myself at their feet. Even so, I was dumbstruck when they offered me the role. I trained hard in the months before the concert. I went to voice lessons weekly and only focused on “Hold On.” I believe they were in the planning stages of putting together the co-production with Shakespeare and 5th Avenue in Seattle when we did the concert. I think my training paid off, because Lucy, Marsha, and David Armstrong decided they wanted to cast me for the co-production if it happened once they saw the concert.

I was offered the role for the co-production on April 25th which, in an eery instance of cosmic timing, happened to be the 25th anniversary of opening night of the original Broadway production.

I haven’t done a show in DC before. But I got to perform at Bill Clinton’s first inaugural ball and again at the White House shortly after he went into office.


You won a Tony Award playing Mary in the original Broadway production. What do you remember about that night?

What I remember about that night could fill a book. The highlights, I suppose, are the feeling of excitement and nerves. Not knowing what to expect. My mother was worried that I would be really let down if I didn’t win, so she kept telling me that they didn’t give Tonys to children. So, I don’t think I was expecting to win. I was extremely grateful to have brought a list of people to thank just in case because I’m sure that my mind would have been completely blank between the shock and adrenaline.

When I finished my speech I walked off stage and a stage manager took the award away. I thought I had done something wrong and they were rescinding. I didn’t know that it was a dummy award and that my actual award would be engraved and sent to me later. Then I was told I had to go across the street to a press conference. All I could picture was walking across Broadway in my dress by myself and I got scared so I said, “I’m just a kid, I don’t have to do that!” I literally didn’t know how I was going to get back in the theater afterward. It didn’t occur to me that someone would be escorting me there and back. I’m telling you, I was wholly unprepared for the entire experience.

I vaguely remember the party afterward. I asked Alec Baldwin if he would dance with my sister. I remember trying to explain to the paparazzi outside the party that my stuffed rabbit whom I had thanked in my speech and who I had with me was Haaraald (with an umlaut over every a. I don’t know how to make an umlaut on the computer), not Harold or Carrot. It was tremendously important to me that my rabbit be properly credited… I was 11.

How do you relate to Martha?

Being a mother, I relate to Martha’s maternal instinct. I’d like to think I’m good at providing emotional comfort. I think Martha sees a hurt, scared little girl in Mary and naturally wants to help her heal. I think Martha, like me, is strong and capable. Martha and I both use humor as a way in with people. I think we’re both cheerful in a grounded, realistic way. We’re certainly not Rebecca of Sunnybrook Farm, but we like to make people laugh.

You have appeared as Martha elsewhere. Tell our readers about that.

Only in the concert at Lincoln Center. It was a thrilling experience. To have campaigned as hard as I did to get the part, the payoff of being a part of that production was invaluable. I was extremely grateful. I didn’t know how I would feel being back in the show. In some ways I expected it to be really trippy, but, for some reason, it just felt right. It didn’t feel weird at all.

How can today’s audiences relate to the themes of The Secret Garden? 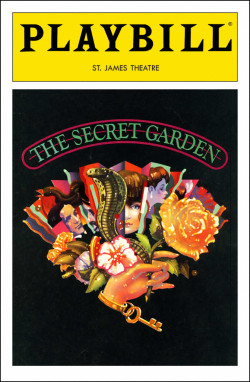 I think at its heart this is a story about love and healing. Those themes are timeless. Beyond that, I think that the story is relevant today because Mary is a refugee, sent somewhere unfamiliar, with no one she knows. With the refugee crisis happening out of Syria, I think Mary’s situation is relatable. Of course, Mary is fortunate to have somewhere safe to go. Most refugees aren’t so lucky.

Why do you think The Secret Garden is being produced so much now? What is it about the show and Lucy Simon’s score that “moves” today’s generation of young theatergoers and parents and grandparents?

The score is beloved and the themes are universal, as I said. I think anyone going through a challenging time can find comfort in this story. It’s sort of a an old-fashioned score in that it’s highly melodic whereas a lot of modern musical theater is less straightforward. I think the 25th anniversary of the original Broadway production is inspiring people to revisit the show.

What fond memories do you have about the NYC production? Do you keep in touch with the cast?

I have hundreds of fond memories. It truly was one of the best experiences of my life. One of the most valuable things I got from doing that show was the relationships I forged with people in the company. I’m still in touch with many of them.

You have worked in film, in theater, in concerts, and on television. Which medium is your favorite, and what does appearing on the stage give you that these other mediums do not?

I don’t think I have a favorite medium. They’re all rewarding in their own way. I like the novelty of TV and film. You do a movie or an episode and move on to the next. I like, too, that you can check your work and change things in the next take, if you’re unhappy. On the other hand, with theater, there is nothing like the energy of a live audience. I love to make people laugh. It gives me tremendous joy to make an audience laugh. There is a power and exhilaration that comes with evoking emotions from large groups all at once. What we do as story-tellers is important. We are the orators of our history. Moving people to emotion means we’ve succeeded.

What advice would you give a young actress who is preparing to play Mary Lennox in her school’s production of The Secret Garden?

It’s easy to fall into the brat trap with Mary. Mary Lennox can act bratty, certainly, but she isn’t a brat. She is a hurt and scared little girl. She is traumatized and left all alone. And one of the most beautiful things about Mary is her ability to search inside herself for resources she doesn’t know she has. She is extremely brave and resilient. It’s important to remember, when tackling this role, that, more than anything, Mary wants love. I think that’s the common thread with everyone in the show. They are all in need of love.

What’s next for you after The Secret Garden closes?

I am in the process of selling a book, so hopefully that will happen and I can get to work on that.

What do you want audiences to take with them after seeing you perform in Shakespeare Theatre Company’s production of The Secret Garden?

One of the glories of art is that it is a highly personal experience. I just want people to feel moved. I’d like for people to come away with a sense of hope. Maybe this show can be a reminder that we need each other to make it through hard times.

LINKS:
Daisy Eagan: From Her Tony Award-winning Mary Lennox to Playing Martha in ‘The Secret Garden’ at Shakespeare Theatre Company by Joel Markowitz.

Dangereuse: “That Burnett Woman: The Magical ‘Secret Garden’ at the Shakespeare Theatre Company” by Sophia Howes.

The next generation of theatermakers will include these young Black voices