For the second show in his first season as artistic director of Theater J, the nation’s largest and most prominent Jewish theater,  Adam Immerwahr picked a play with the counterintuitive title The Christians. Written by Lucas Hnath, who grew up in an evangelical Christian church and at one time considered becoming a minister like his mother, The Christians is set in a megachurch (a congregation with 2,000 or more souls).

All of this piqued my interest, not least because I too grew up in a Christian church, I’m a seasons-long fan of Theater J, and I dig audacious programming. So I asked Immerwahr if he would explain some things to me.  His answers surprised me as much as his choice of the play.

John: Reading The Christians was like rocking a world I grew up in. It lays bare so much stuff about the institutionalization of Christian belief in America that for someone like me who was raised in the Christian church, it’s like someone spiked the communion wine with truth serum. It’s a play that would rattle the foundations of Christian faith and practice staged anywhere in the country. And you’ve gone and programmed it into your first season at Theater J. Like, boom. What were you thinking?

Adam: That’s an interesting read on it, because I read it and I think: This play is about the institutionalization of religion in America. The things that this play is exploring are not actually, fundamentally, only about Christianity, though the very specific scriptural argument being made in the play is a fundamentally Christian scriptural argument. The topics that are being explored—the clergy’s role as a public and private person; houses of worship as businesses and also faith-based institutions; how a religion can divide itself over a difference in doctrine; how we come to believe the things that we believe and how we hold on to those beliefs; in a conservative congregation of any sort, of any stripe, of any denomination, how we adjust to change; how religion can pull us apart or bring us together—I feel like these are all as relevant to someone who’s Christian as they are to someone who’s Jewish as they are to any other faith. The play itself is about religion and about what happens when our beliefs change.

I can see that you see that. When I look at it, I hear pitch-perfect rendering of the language of Christianity. The ministers I grew up hearing talked like that.

Sure, because every play is both particularistic and universal. And in many ways that’s the secret of Theater J. If the only way into a play was because you feel personally identified with it and connect with the religion, then Theater J’s plays wouldn’t on average reach the larger audience as much as we know they do. And it’s because you can see an incredible play that’s about Judaism and Jewish people, and for those who are Jewish it feels pitch-perfect authentic and for everyone else it feels like a gripping, exciting story.

I’m the everyone else in that sentence.

You’re the everyone else in that sentence, and for The Christians, now you’re on the inside of that experience. But it’s really just a slight adjustment of what Theater J has always done, which is explore how faith works inside of our communities, explore how religion operates to drive us apart or pull us together—these are all questions Theater J has come to over and over again. And The Christians does it so beautifully. It just happens to be set inside a nondenominational megachurch.

Did you get pushback?

None to speak of. More fundamentally there’s been a lot of excitement about it. The play is not a critique of Christianity, as you know having read it. It’s not a critique of Christians. It’s not mocking. It’s an incredible exploration of a fictional church. And the play is a tragedy, in the Greek sense. It’s structured on Antigone. It follows that pattern beautifully. Emotionally the journey of it is exquisite. This play is built on such a strong foundation dramaturgically that it lands and delivers in an extraordinary way.

In an interview about The Christians with Washington Jewish Week, you said, “To me this seems like our most Jewish play, perhaps.” How did you mean this is Theater J’s “most Jewish play”?

Well, now I would say it’s our most Jewish play this season because it hits themes that are going to resonate for our Jewish audiences even deeper and more connectedly than some of our more legibly Jewish plays will, because it’s so on the nose about what happens when we go to a place to pray. Jews, we daven. But who we daven with, how we go about the business of faith, how we go about the practice of faith— You know, congregations of all denominations have been transformed in my lifetime over their relationship to female clergy, to gay marriage. These are extraordinary shifts in our culture that have also been shifts in religion that have torn congregations apart, have caused people to lose jobs. They’ve illustrated and exposed the way that faith in America is politics and spirituality and business. That’s what The Christians explores.

The playwright Lucas Hnath was raised in the Christian faith but does not disclose publicly whether that’s his belief today. He may be in some un-Christian closet, I don’t know, and I don’t care, because his script makes plain on every page that he has deeply sympathetic insider eyes and they’re wide open.

His play has just five characters but in a telling stroke of theatrical authenticity he calls for “a full choir—the bigger the better.” How is Theater J achieving that?

We’re doing it in a way that so far as I can tell is the first time anyone’s done it. We’re partnering with a series of churches, community choirs, educational choirs throughout the DC metropolitan area, each performing once or twice on a different night of the show. So one night you may get the Baptist choir, the next night you might get a youth choir from the Performing Arts High School, another night you might get the Catholic choir, or the Methodist Jubilee Singers. Right before the show starts each choir will sing two of their greatest hits that they choose, and then once the show starts they’ll sing the songs that are within the play. Each choir is going to sound different and feel different. It’s going to change the mood of the play completely from night to night. And it’s going to really be an exciting way to welcome a lot of people into our space and into our building and say, You’re part of making art here, you belong here.

One of the things that drives the drama in The Christians is whether there’s eternal damnation after death. When I interviewed Liam Forde about his role in Studio Theatre’s Hand to God, he pointed me to a video of a Christian bishop who says hell is an invention of the church to control people with fear.

Whether there’s a hell is actually a real question going on in Christianity right now. And Lucas Hnath’s play, which is set in “a really big church,” shows us that theological fissure slicing into a congregation. We witness the fallout, which is wrenching and riveting. The argument plays out in some shocking ways, both emotionally and conceptually.

In the Jewish faith, so far as I’m aware, one need not wring one’s hands about whether there’s a hell. There’s plenty to angst about, just not that. Is that your understanding too?

I’m hardly an expert on Jewish theology of the afterlife—

Okay, it’s what I’ve read. Google tells me that the notion of eternal damnation after death is not in Judaism.

That’s my understanding as well.

So for those who come to see The Christians from a non-Christian background, how do you expect the play’s persistent questioning about hell’s existence to “read,” or mean, or play in the mind?

Well, you’ve just said it; it’s the words persistent questioning. For the Jewish audience, that’s what we do with our religion. We interrogate, we examine, we study the Talmud, we debate it, we read the Torah, we discuss it. There are synagogues all over the region where after the rabbi’s sermon there’s a healthy debate that happens right there in the congregation, and it’s exciting and thrilling and intellectually stimulating. Jews question, we wrestle, and we examine. The Jewish religion has a body of literature that is essentially arguments rabbis have made about the Torah and its meaning. For the Jewish audience, scriptural analysis is the heart of our religion; we totally get this. And even if what is being argued about is in a Christian context, the way it is done is fundamentally Jewish.

So even if hell is not at issue for somebody, there’s plenty to relate to and identify with.

And why should someone with a background in the Christian faith want to see this play at Theater J?

Well, leaving aside for a moment the thematic  merits and arguments of the play, you’ve got a top-tier cast—Caroline Clay, Annie Grier, Michael Russotto, Justin Weaks, and Michael Willis—doing one of the most searing pieces of drama written in the last ten years. The hit of New York when it was premiered at Playwrights Horizons. Enormous success at Actors Theatre of Louisville before that. It’s an extraordinary, moving, powerful piece of theater.

What conversation do you hope will be inspired by this play? 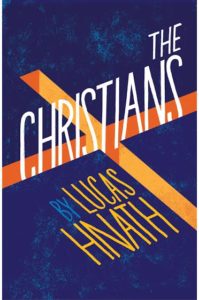 I hope people will look at the play and start to think about their own relationship to their beliefs, their own relationship to their practice, their experiences with religion or not. I hope people will look at this play and think about why they make the choices we make, how our morality is driven, what is motivating us to be good people in the world, to heal the world.

Also, leaving all the religion aside, as a Greek tragedy structurally, it is a play about how one man can make a choice that can have effects that he had never imagined, and how he might discover those effects as they unfold and change a whole community. That’s a universal idea—how we made decisions, how those decisions can have impact, and how we discover the importance and meaning of those impacts. That resonates with anyone.

Theater J has programmed a series of conversations during the run of The Christians. Hot-button topics include theology as both divider and unifier (November 17th), religious institutions as business enterprises (December 10th), and what happens when the private lives of clergy become public (December 11th). The full schedule of these free special events is online.