Have you been looking for a show that combines laughter, wisdom, magic and miracles? Your prayers have been answered! This weekend, God: The One Man Show (“God”) is playing the Charm City Fringe Festival. Since debuting at the Capital Fringe last year, God has toured to several cities on the East Coast, earning more converts at every stop.

God is the creation of comedy juggler, Rich Potter. Potter has an impressive pedigree in the comedic arts. A graduate of Ringling Bros. and Barnum & Bailey Clown College, Avner Eisenberg’s Eccentric Performing course, and Spain’s Nouveau Clown Institute, Potter’s got a level of professionalism you’re not going to find in your kid’s birthday party balloon-twister. With 20+ years and 20+ countries worth of experience, his performance is smart and whimsical, with hints of Italian Commedia dell’arte and British Harlequinade.

What I’m trying to say is the man’s got mad skills.

In God, Potter imagines what happens before “In the beginning.” A prequel, if you will. Like what George Lucas did with Star Wars, only good. He shares His struggles and some of the downsides of being The Almighty One; living in the great void between universe development projects, for example, can be a bit of a yawn.

Potter’s taken care with this production to make sure there’s something for everyone; from jokes invoking Sartre to whoopie cushions, you will find this show amusing whatever your taste. Many of his gags work on several levels and Potter, thank all that is holy, never feels the need to explain his jokes.

Potter is also an excellent physical comic, skilled in juggling, pantomime, and sleight of hand. And he’s charming enough to do the impossible – he actually got me, an officer of the Baltimore Introvert Society, to be one of the volunteers who helped with a sketch onstage. Talk about a miracle!

He’s been likened to Robin Williams due to his frenetic energy and infectious mirth. While I agree with that assessment, I think it leaves out one of my favorite characteristics of the late comedy genius: he radiated a certain kindness. I felt that when Potter called me to the stage. Outweighing my awkwardness was my feeling that he wasn’t out to embarrass me, just to include me in the fun. (And not just because I was reviewing the show; he didn’t know I was press until after).

I think what I liked most about this show was that it had substance. Potter could easily enough have spent an hour juggling, cracking jokes, changing costumes, and making things disappear and reappear and it still would have been a good show. Instead, he infused his hilarious hour onstage with politely non-political messages about acting as good stewards of the environment and being kind to one another.

God: The One Man Show has been one of my favorite performances so far at Charm City Fringe Festival. I encourage you to fit it into your schedule before it’s gone.

God: The One Man Show plays through tomorrow, November 13, 2016 at the Fifth Annual Charm City Fringe Festival, performing at Stillpointe Theatre – 1825 North Charles Street, in Baltimore, MD. Tickets, and required Fringe buttons, can be purchased at the box office or online. 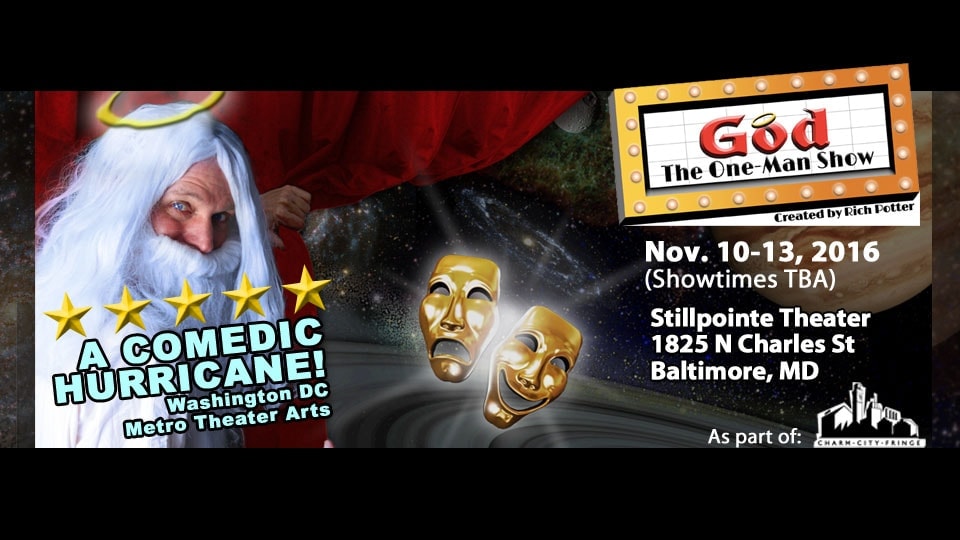 Charm City Fringe Review: ‘The Pink Hulk: One Woman’s Journey to Find the Superhero Within’ by Patricia Mitchell.

God: The One Man Show