There has been a wealth of films about Broadway over the decades. Many oft these Broadway-related movies are from a too distant past even if still shown on AMC or Turner Classics.  If the older films still connect with new generations is up for grabs.

So, It was a joy to see the 2015 film Birdman when it arrived to critical acclaim. It even received a number of Academy Awards including for Best Picture

Birdman follows the character Riggan Thomson, who is portrayed by MichaelKeaton. The character Thomson is a Hollywood actor known for playing a movie superhero named “Birdman.”  But with all is Hollywood success, he is struggling to mount a Broadway play hoping to re-energize his lackluster career as an actor. Birdman tells his story as a personal struggle about “is there anything left and what and what may be next.” Issues many of us struggle with in real life but likely not as Birdman the character and Birdman the movie depicts.

For those who saw the film, you may well remember another “sound” character with a vast “speaking” role; the virtuosic and very varied percussive music performed by Antonio Sanchez.  His jazzy score long with the other tunes from the likes of Mahler, Tchaikovsky and Rachmaninoff   added such great fuel that burned throughout the movie.  Turning the sound track to mute, kills much of the emotional pop and vigor.

Now, Birdman Live! will showcase Sanchez in a live appearance in a distinctive manner. He will perform the Birdman movie score from a drum kit on the Center for the Arts stage while a special print of the Oscar-winning film Birdman (or the Unexpected Virtue of Ignorance) is projected behind him. Sanchez’s live performance will underpin each scene adding intensity. And as with jazz spontaneous riffs are expected. And Sanchez becomes a part of the visual experience as well.

BirdmanLive! will be performed at the George Mason University Center for the Arts on November 18, 2016.

David: Why did Center for the Arts decide to schedule Birdman Live! ?

Tom: The use of live accompaniment to film is a new genre for many performing arts centers around the country, and we find the concept to provide something new and different for our audiences. We started last season with the live orchestral accompaniment to selections from Disney’s Fantasia films, so this is our second experience presenting this type of work.

One of the missions of the “Great Performances Season” is to provide professional experiences to support the work that is being done in the classrooms of the College of Visual and Performing Arts (CVPA). The Film and Video program in CVPA is one of the fastest growing programs, with extraordinary faculty, and exceptional students, and we are eager to provide students with a chance to experience one of the ways that their studies can lead to professional opportunities.

If you could invite patrons to Birdman Live! what would you say to them?

I would explain to people that we are excited to offer them the opportunity to try something new at the Center, and that we would encourage them to experience this new live performance/film combination.

Why is a screening of the movie Birdman with live musical accompaniment a singular event?

Thomas Britt: Birdman is a movie acclaimed for the way in which the camera moves. While Chris Haarhoff and Emmanuel Lubezki deserve recognition for that aspect, Sanchez’ music also helps to create the feeling of movement within the film. To see the film with live musical accompaniment will highlight his contribution.

If you could invite audiences what would you say to them?

Birdman is in part a movie about a person using live performance to escape his cinematic identity, and this particular event illustrates those two spheres in a creative way. And this is a classic form of movie exhibition that cannot be experienced on a TV or device screen. 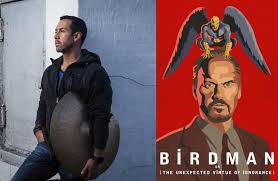