“If needed, use additional sheets.” I remember always being curious how anyone writing a High School exam essay could ever write enough to need additional sheets. Then I had the opportunity to review the Quince Orchard High School production of Almost, Maine by John Cariani and produced by Linda Lee.

According to Wikipedia Almost, Maine was developed at the Cape Cod Theater Project in 2002, and received its world premiere at Portland Stage Company, where it broke box office records. Almost, Maine opened Off Broadway in the winter of 2005/2006 at the Daryl Roth Theatre and was subsequently published by Dramatists Play Service. To date, Almost Maine has been produced by over 2500 theater companies in the United States (and by over a dozen companies internationally) making it one of the most frequently produced plays of the past decade.

I may need additional sheets…

Director Nicholas Jullian Saadipour and his trio of Student Directors Eli Schwartz, Luke Tittle, and Madhur Vinaik coaxed every ounce of love out of these obviously talented High School performers who welcomed me to Almost, Maine, a town that’s so far north, it’s almost Canada.

I caught the final performance. It was Senior Appreciation Night. The house was electric thanks to solar flares and the spectacle of the Northern Lights magically presented by Technical Director Alex Henry who’s interior and exterior set design placed me right in the action. Through eleven vignettes, the audience is exposed to just about every facet of this human thing we know of as ‘Love.’ 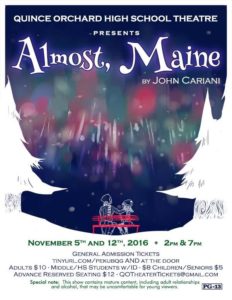 Alex Roth and Camryn Mercer portray Pete and Ginette; in love, in solitude, and together at the beginning, middle, and end of this enthralling production.

Darya Malak Motiei and Daniel Holton erased all memory of my pedestrian life with her delightfully spacey Glory and his iconic repairman East.

Keegan Lauricella-Reed’s portrayal of Jimmy’s lost opportunity and Jessica Fisher’s Sandrine (the one that got away) just pulled at my heartstrings until Olivia Speck’s waitress served up salvation.

Coincidence (and the need to do laundry) brought together Emilie Prince (the revved up Marvalyn) and Alex Chase (the extraordinarily reserved Steve).

Perhaps the most poignant relationship is revealed by Bridget Lam as Lendall and Sarah MacPhee as Gayle who have been sending and misreading all the right signals for years.

Mason Radis and Chris Barron are fall-down funny competing for “Most Worst Dater Guy” as pair of hapless locals – Chad and Randy – who awkwardly realize they have way more in common.

Alex Roth and Bree Kooienga cathartically portray Phil and Marci who just can’t seem to get going on the right foot.

Drew Reuschlein, Zoe Lee, and Annie Coulson – surprised with their portrayals of a A Man Named Dan, Hope, and the Man’s Spouse.

Following the show Director Saadipour thanked and introduced all the important people who make a high school production of this quality possible. When all was said and done the stage was jam packed with people whom I will now identify (see additional sheets…):

Well done everybody – I loved it!

Almost, Maine played on November 5 and 12, 2016, at Quince Orchard High – 15800 Quince Orchard Road, in Gaithersburg, MD. Their Spring production will be announced around the 1st of the year. Questions and seating information are available by emailing the tickets chair at QOTheater.Tickets@gmail.com. Tickets are usually available at the door before each show.